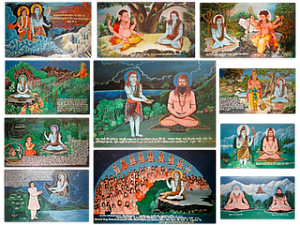 Each of the nine Nathas (Navanathas) is a svarupa of Deity, and Nathas worship not just Deities, but their "svarupas" first and then Deities. “Svarupa” is the true form. For example, the body can be considered as a secondary form and the soul as primary form, therefore spiritual form is svarupa. In the Tradition, Navanathas have two forms: the first is "bhoga-rupa", the second is "yoga-rupa". “Bhoga-rupas” are forms such as Ganesha, Vishnu, Chandra, Parvati, Brahma and others, while “yoga-rupas” are forms such as Kantharnath, Santoshnath, Chauranginath, Udayanath, etc.

Yoga-rupa, according to teaching of Nathas, is considered to be of higher level than bhoga-rupa, and this must be correctly understood because bhoga-rupa is also important, it complements yoga-rupa. It is believed that Yogi who has reached the state of jivan-mukta is even superior in level to many Gods. It would be right to say that manifested and unmanifested Absolute is present in human body, a living being is able to achieve Shiva-Shakti samarasya state, therefore the path of Yoga leads to the highest perfection.

In Natha-sampradaya, eighty-four Nathas (Chaurasi Siddhas) are the most known and revered, nine of them are most famous in different panthas. As a rule, some names may differ, but there is the common list of nine Nathas.

Of the nine, five are the most famous Nathas, and of them three are central: Adinath, Gorakshanath, and Matsyendranath.

Adinath is a symbol of the unmanifested transcendental reality – "shunya" or "akula", Matsyendranath is kaula-avatar, he revealed the path of tantra, and Gorakshanath is yoga-avatar, Shiva, which is the unity of the transcendental and immanent reality. Gorakshanath revealed teaching that is a synthesis of tantra and yoga. Therefore, the name Gorakshanatha is bija of all mantras practiced by Nathas.

Gorakshanath is defined as shunya-rupa by many texts of Natha Tradition. He is a form of transcendental emptiness, which leads many to believe that he was also associated with the tradition of Buddhist siddhacharyas. But in fact the name Gorakhnath is mentioned in many other Traditions. It is believed that the first Nathas – Matsyendranath, Jalandharnath (Hadi), Chauranginath (Puran Bhagat) – did not pass the test that Devi (Shakti of Adinath) gave them and only one Gorakshanath turned out to be the most detached Yogin. He founded Nath order and all Natha Yogis became his disciples. Therefore, Gorakshanath, despite the fact that he was a disciple of Matsyendranath and Adinath, is revered much more than his Teacher and other Yogis, since Gorakshanath formed the basis for Yoga and Tantra.

Gorakshanath is son of Matsyendranath, born from his consciousness, he is bindu, in which are contained all tattvas and all yogic teachings. Since Gorakshanath developed yoga-avadhuta-marga in its most perfect form, all other Gurus are considered as manifestation of Gorakshanath, especially Navanathas, who, despite the fact that they are the essential forms of the main Deities, are also considered as manifestations of Shiva (Alakh Niranjan).

The story tells that Devi and Shiva Adinath first revealed the secrets of shabar-mantras to Matsyendranath. These mantras were also known to all Gods and to many living beings in the universe, and the power of the entire universe is contained in shabar-mantras. It is believed that Matsyendranath, being kula-avatar, knew the secrets of kula (secrets of life), he could revive the dead, and this knowledge he passed on to Gorakshanath, who, in turn, improved and synthesized all the teachings that Nathas followed then. Therefore, mantra "Om Shiva Goraksha Yogi" is bija of all shabar-mantras and is the power of all Deities.

Shunyata is the connecting link of all the manifested tattvas and each of the Navanathas corresponds to certain tattva, respectively, and chakras, namely:

It is believed that akashas or vyomas are different states of attaining Atman (Atma-jnana). In fact, there is infinite number of vyomas, but they are all manifestations of one vyoma. The texts describe 5 main vyomas: Akasha, Paramakasha, Mahakasha, Tattvakasha and Suryakasha, which are revealed in the process of yoga sadhana and their comprehension leads to "atma-jnana", the realization of the unity of Atma, Jivatma and Paramatma.

Navanathas and their correspondences to the planets (grahas)

All Navanathas are points of access to certain universal forces, as well as basic tattvas such as Maha-prithvi, Maha-jala, Maha-teja, etc. Udayanath is considered the universal Shakti.

As for their correspondence to the planets, there are many options and interpretations, because there are at least two categories of Nine Nathas, one as manifestations of Shiva, another as manifestations of Vishnu. Nine Nath-Narayanas are mentioned in Vaishnava Purana "Shrimad Bhagavatam", among them Gorakshanath too. The main ones of all Navanaths are Adinath, Gorakshanath, Matsyendranath, Chaurangi. Since the Tradition itself has mainly spread in the North, this is why Shaiva category is the most popular. Navanathas can be related to planets in the following way:

However, not everything is so simple and unambiguous, because in Hinduism each Deity can have its own manifestations and aspects, which also correspond to the grahas. Deities (if we consider them as immortal Nathas) are above the grahas. These ratios are given in connection with the Navagraha-puja, which is used in rituals among the Nathas, also Navanathas in the ritual are placed on the cardinal points. The ratios, in fact, can be different, these are the most common.

Numerical Symbology Associated with the Chaurasi-siddhas

The number 84 is obtained from the multiplication of 7x12 – twelve months in a year and seven days of the week. 84 is the symbol of Shiva Mahakal. In Vedism, brahminical cords were measured by anguls (fingers). The brahmanic cord has 84 angula, the kshatriya cord – 64. Anguli is a symbol of Atman, as well as 84 are the forms of Atman’s embodiment.

Navanathas are also symbols of various aspects of Absolute and its creations. Adinath – akasha, Achalachambhenath – shesha (air and gravity), Santoshnath – fire, Satyanath – water, Udayanath – earth, Gajakantharnath – consists of all the elements, he creates different forms, ganas and different Deities, Chauranginath - the Moon and vegetation, animal energy. When there is plant energy, then there is sexual force or Mahamaya – this is Matsyendranath, and Gorakshanath closes the circle, he is the form of jnana, that which is opposite to Maya. Although, of course, there are other interpretations of the Navanathas and Chaurasi-siddhas.

There is also another symbolism. Followers of Gorakhnath sacralize the body, so, for example, every person's body is the size of his 84 fingers. In the Upanishadas, Atman is identified with a finger; in the Kulananda Tantra, Matsyendranath recommends meditating on the light of one-finger-size in the heart. Of course, such texts are unclear to the common man, it is not clear who the yoginis are, what nada and bindu are, what the sun and the moon are. The meaning of the symbolism becomes known when one studies many traditional concepts.

Navanatha upasana can be part of the Gorakshanatha puja. After japa-mantra "Om Shiva Goraksha Yogi" (it is desirable to receive mantra with diksha), you can read prayer texts, vandanas, stutas, stotras, including those dedicated to Navanathas. If you have the transmission of Gorakshanath mantra, then any mantra associated with Navanathas can be practiced without transmission.

Mantras and texts for worshiping