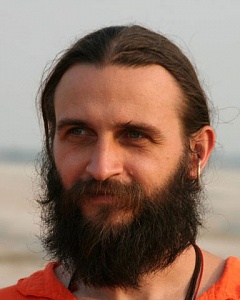 Sahaja means "essence", i.e. innate, primordial, higher nature. The practice of sahaja is the awareness of oneself as Shiva-Shakti yamala (union), without any efforts in the form of techniques or willingness to sustain supporting states, when it is so obvious to you that you are Shiva that you do not need to prove it to yourself. So, for example, how do you not prove to yourself that you are of some nationality. Being in the state of sahaja, you don’t think or plan anything, and at the same time everything always develops in the most ideal way.

This is the level of perfect Pratyabhijna (in terms of Kashmir Shaivism), awakened consciousness, and non-dual state of consciousness (that is able of including and differentiating). Such a state is natural for everyone (sahaja) and can manifest itself in any kind of Dharma and related forms of practice. For some, it develops through performing pujas, for others, through practices related to psychophysics, i.e. everything manifested can become upaya, because kula ("family", manifested creation) is Shakti herself, also she is Vidya (pure knowledge), which generates all methods, and makes these methods to be Vidya (knowledge).

Sahaja is described in "Akulavira-tantra" by Matsyendranath, and to sahaja refer the methods of Kaula-prakriya or Anupaya described in "Pratyabhijna-darshana" by Utpaladeva (Tradition of Kashmir Shaivism). Different types of yoga: karma, jnana, bhakti, laya, hatha, raja, mantra, etc. - all lead to this state. For example, bhakti at the highest level of dvaita leads to the highest level of non-duality, just as jnana is the purest non-dual knowledge, which includes duality in all its forms.

The very concept of bodhichitta implies a state free of egoistic motivations that form individual limited personality with a narrowed (unawakened) consciousness. Similarly, in Nath worldview, awareness of the unity of microcosm and macrocosm through yoga plays a basic role, and the practical realization of such an ideal implies the abandonment of lower egocentric motivations. Without such an approach, yoga cannot be realized as the unity of individual soul and Universal soul (Paramatma), or the unity of everything in one's pure consciousness. All types of yoga, all sections, all instructions for sadhanas are based on this.

The backbone of the practice of sahaja among Nathas is that the Highest is extremely simple and is the essence. There is a statement in Bible that "the first will be the last, and the last will be the first." Meaning that for God we are all equal, and the levels, by large, are all relative. Many are proud of themselves of being more spiritual, more knowledgeable, more "exclusive". From the point of view of Gorakshanath, such opinions about oneself are disturbances of the mind and feelings, that, of course, lead to a worldly, gross state of consciousness.

And the more such a person believes that he is the greatest, the more animal nature triumphs in him, and his defilements are difficult to cure. Gorakshanath argued that samadhi, silence and purity of mind are not something distant or unusual for us, but, rather, on the contrary, that this is our most natural state. And that in order to achieve it, one doesn’t need to go through all levels, that levels must be left behind, and one should remain in his essential state and in peace. Gorakshanath accepted representatives of all social strata, because a person who considers himself to be like a child, and not a great connoisseur of texts, is closer to God, there is more silence of consciousness in him. He will not argue about which practice is more exclusive and which samadhi is better.

It is for this reason that in the sixth part of "Siddha-Siddhanta Paddhati" Gorakshanath criticizes those who put their tongues behind the palate, who demonstrate their literacy in Shastras, etc. He says that they are all only moving away from their nature and from the yogic path. In fact, he is talking about sahaja, that the practice should not be unnatural. Yoga is a natural practice, despite the fact that many of its methods may seem a little fanciful. If yoga is understood as an accumulation of many techniques that have the same essence, and, in each practice, one initially focuses on the essence, then all yoga methods become essential. This view is the basis of the entire practice of Natha’s sadhaja.

If a person is not able to cope with his mind and feelings through consciousness, then it is proposed to achieve sahaja through the immersion of consciousness in the breathing process, since breathing is the most natural thing for a person, and already through work with breathing we "straighten" consciousness in a natural way. Actually, the practice of sadhaja-sadhana among Nathas is defined as "sa" - with, "ha" – hatha-yoga, "ja" - japa, that is "practice with hatha-yoga and japa". This is a technique when you realize the divine in all-natural processes. Among Nathas, the natural processes include breathing and repetition of ajapa-japa "soham", which is based on the principle "I am He". These two processes are key elements of Natha’s sahaja.

Nathas follow the path of sahaja (essence). Sahaja is also directly related to Vajrayana Buddhism, Vaishnavs (especially in Bengal, where this cult appeared around the 15th century and is associated with Lord Chaitanya, as well as the vaishnava-sahaj Mukunda das). Dasgupta in his book “Obscure religious cults” draws interesting parallels between Buddhism, Nathas, Bauls, and Vaishnavas. In addition, one can find many similarities between sahaja and Sri Vidya.

In sahaja, Guru-vada (worship of Guru) plays a significant role; in Sri Vidya, Gurus are related to the center of Sriyantra and Kama-kala triangle. Manavaugha, Siddhaugha, and Divyaugha are the three Gurus associated with the elements of sun, moon, and fire. These are the three loops of Kundalini, which awakens by the grace of Guru, who is identified with sushumna channel. Sushumna is called Kula-marga, avadhuta and also sahaja.

In Buddhism, Vajrayana direction is also called sahajayana, since the practice was built on three components: prajna (wisdom), upaya (means to liberation), and sahaja (the highest primordial nature). These principles are identical to the left, right, and central channels in the subtle body of a person. Sahaja is the central channel where bodhicitta (awakened consciousness) manifests when upaya and prajna are united.

When bodhicitta passes into one of the side channels, it is destroyed. Accordingly, by combining the currents of the moon and the sun in the chakra at the level of navel, yogi attains sahaja. Further, passing through two more centers, at the level of the heart and throat, he reaches certain mudras (states), such as karma-mudra, dharma-mudra, maha-mudra, and samaya-mudra. They are also connected to three Buddha bodies: nirmanakaya, dharma, sambhoga- and sahaja-kaya. Sahajakaya is the level that we reach in the fourth ushnisha chakra (sahasrara), and upon reaching we finally unite the principles of prajna and upaya, attaining supreme bliss (mahasukha).

In general, the teaching about the three bodies of Buddha is very consistent with the worldview set forth in "Siddha-Siddhanta Paddhati", probably, earlier these Traditions had one basis. Obviously, the names of such mudras as sahajoli, vajroli in Nath hatha-yoga, came from sahajayana and vajrayana, practices associated with "Chandali" ("chanda" translates as prajna, "ali" - upaya).

According to cults that emphasize on the development of bhakti, sahaja means that everything that you do and come in contact with, and everything that happens (both good and bad) does not exist because of your (lower) will, but in accordance with God's will so that one has nothing to worry about. You, again, are in a state of supreme satisfaction (mahasukha). Of course, this does not imply some kind of reckless fanaticism, extreme idealization or some kind of unconscious behavior - in the state of sahaja, a person is more than adequate and sane. Adequacy in everything and confirms that a person really is in sahaja state, and not in its appearance. God and Nature are not stupid, so the seeming ease of the path, which is often associated with sahaja path, is seen as such only for an immature consciousness. The ease of the path is not an advertisement for the path, but something that must be constantly followed.

Hatha-yoga is designed to cleanse yourself, discipline yourself, remove looseness in the body. In parallel with the practice of hatha-yoga, one must observe the prescriptions of yama and niyama, as well as some sacred prescriptions related specifically to hatha-yoga or raja-yoga. These practices are fundamental, without them tantra, sahaja, etc. cannot be practiced in a perfect form. Of course, at a higher level, some formal rules are not so important, other laws come into force, but it is not possible to bypass the school of renunciation, purification and tapas, and immediately become a perfect sahaj or tantrika-siddha. For example, in Russia you can hear a lot of fables about this, something that does not actually exist in India. Therefore, the stage of high-quality cleansing and preparation is very important.

For good quality japa, you need to be able to control prana and mind, which are interconnected, it is important to master a perfect asana. When the texts talk about the initial level, about preparation, of course, this does not mean that one should look down on the "initial" level ahead of time: if it is not passed well enough, it will become like a castle on the sand. Therefore, hatha-yoga, bhakti, karma-yoga and other types of yoga, make a solid "spiritual foundation" for the esoteric practices of sahaja.

Upasanas are the preparation for Sahaja, through which sadhaka builds a deeper relationship with Deity. If we consider pujas, we can notice that any puja is, as a rule, something very similar to ordinary communication with someone important, who came to visit us. You cannot afford familiarity with him, imposing behavior, etc., at least you must create a good impression of yourself in order for further communication to continue.

So, it is with the practice of upasana - at first the Deity comes and goes, and then, as relations are built, there is no need for him to leave or come, Deity is always with you, then the practice goes to the level of sahaja. Deity reveals more about itself, and you yourself too. If you can't do that, then you can practice in the spirit of tapasya - simple sadhanas, but regularly. When you sacrifice yourself to Deity, serve Deity properly, it then also begins to serve you and arranges everything so that your life develops in such a way that you can connect it with spiritual practice. The main thing is to create a reliable connection with Devata, and a perfect body, mind, prana, control of emotions and feelings are the criteria that adept has been trained, and this is a guarantee that the mystical aspects of yoga will not lead him to negative results.

Connection of sahaja and mantras

In the practice of mantra-yoga, different levels of mantra repetition are distinguished: vacaka - repetition of the mantra aloud, upamshu - in a whisper, or rather, repetition when only you alone hear the mantra being repeated. At the level of manasik, your mind and mantra become one. Ajapa-japa is the highest level, when mantra merges with consciousness and prana (soham-bhava), i.e. in your practice of mantra, you reach the state where you yourself, mantra (shabda) and Devata (mantrartha) become one, in the awareness of "I am He" (Ishtadevata).

Then you are able to fully practice mantra at any time, during any action. However, this level has many of its own preliminary tantric sadhanas that allow you to attain it. For example, the practice of identifying yourself with Devata and his mantra through nyasa, in which you distribute mantra throughout the body, thereby assimilating your body and mind to the body and mind characteristics specific to Devata.