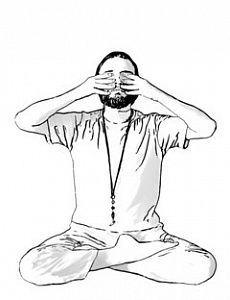 The texts give the following definitions of Laya-yoga and its processes:

“Laya-yoga is praised ten million times – it is the dissolution of consciousness; whether you walk, stand, sleep or eat – always meditate on Atman (the one who perceives). This is the meaning of Laya-yoga. " (Yoga-Tattva-Upanishad, 23, 24)

“Shiva announced many truths, such as the immortality of dissolution (Laya-Amrita) and others. I briefly conveyed one of them leading to Liberation. " (Gheranda Samhita, 7.22, Gheranda)

“When prana reaches immobility, this is the dawn of laya-yoga. Through dissolution (laya), happiness is achieved, the highest state of bliss of one's own Essence. " (Yoga-bija, 151, Gorakshanath)

“Shri Adinatha explained one and a quarter crore of Laya's methods. We regard nadanusandhana as the most effective of all Layas. Laya-yoga is especially praised. But what are the characteristics of Laya? Laya does not return to the world of feelings, Laya leaves objects of experience. " (Hatha Yoga Ratnavali, 12-13 Shrinivasa).

“Sounds from Anahata unite with Chaitanya (Pure consciousness), thought is absorbed (Paravairagya) and stops, devoid of its objects. This dissolution is laya, leading to the highest state of Vishnu (Vishnu Parampada). " (Hatha Yoga Pradipika, 4.99, Svatmarama)

“Through the immobility of the mind, the balance of prana is achieved, through this bindu becomes immobile. Due to the immobility of bindu, eternal sattva and immortality of the body (pinda-sthairya) are attained. Above the sense organs, the mind is the lord, the lord of the mind is prana, the lord of prana is laya, this laya is enclosed in nada. After the elimination of inhalation and exhalation, the destruction of the aspiration [of the mind] for objects, the yogi achieves dissolution (laya), free from movement and change. In the spontaneously attained state of laya, all sankalpas that generate all kinds of mental activity are eliminated. This state is indescribable. " (Goraksha-vacana-sangraha, 132-135, Gorakshanath)

It is believed that God Shiva Adinatha transmitted many thousands of Laya-yoga practices, the main one being nadanusandhana, which includes methods of concentrating on the sound (nada) heard in the anahata chakra. Nada is Shiva-Shakti-samarasya. Usually, the texts mention 4 stages of practice: arambha (beginning) – the Brahma-granthi knot is untied and prana enters sushumna, ananda opens in the heart and the sounds of anahata-nada are heard. This is followed by "ghata-avastha" (vessel), which corresponds to the untiing of the Vishnu-granthi knot, the experience of ati-shunya. "Paricaya-avastha" (growth), the experience of "Mahashunya" and "Nishpati-avastha" – the final stage in which the knot of Rudra-granthi is untied, when all the seeds of karma are burned. At this stage of Laya-yoga, the yogi attains a perfect body – divya-deha or siddha-deha. There are many synonyms and definitions for this achievement: kaya-siddhi, pinda-samvit, jivan-mukta, etc. In "Siddha-siddhanta-paddhati", Gorakshanath says:

“The yogi comprehends state of samarasya in his body, he cognized the micro- and macrocosm (Vyashti-pinda and Para-pinda). He sees everything in himself and himself in everything. "

Laya-yoga, as a rule, includes preparatory practices in which pranava Om or bhramari-pranayama are used, i.e. a rough form of sound, from which one can "push off" and move on to internal practices. In them, nada is absorbed into its source of manifestation, i.e. bindu. There are also many other methods of Laya-yoga, for example: pranayama, mudras, bandhas, drishti, ajapa-japa or ajapa-gayatri, chakra-bheda, concentration on adharas and lakshyas, all of them are an integral part of the practice of Laya-yoga.

The meaning of nada

Nada is maithuna (union, intercourse) of Shiva and Shakti, the contact of emptiness and form, while mudra is formed (reflection of the transcendental light in an object), in mudra nada is formed. With an increase in the strength of nada, bindu is formed, from bindu – kamakala (triple bindu). The concept of exactly where nada manifests itself is often very different: a number of sources say that in the anahata chakra, other Natha texts claim that it is in the region of the skull (brahma-gufa). But nada itself is not limited by the localization in the physical world, nada is the flow or movement of Shakti. Shakti pulsates in the nadis (channels) of both the subtle and the gross body, when we close our ears, we hear the pulsation of nada, all movements in this world are Shakti. Without Shakti, nothing can happen, no change, including spiritual, therefore all Natha’s practices, one way or another, awaken Kundalini Shakti, or prepare the body, mind and spirit of a person for this.

There are two realities – passive and active, which are not something separate, and therefore, through Shakti, we cognize Shiva, and vice versa. Consciousness and energy are inseparable. Nada is the flows of prana in the channels, and nada is also Kundalini-shakti, she is the Supreme transcendental reality, "unaffected", displayed in all sounds and phenomena of the world. All phenomena dissolve in this reality, if in the microcosm we experience this process, then our prana and consciousness move to a higher transcendental level, and we achieve samadhi. This process is achieved through laya-yoga, where nada-yoga is practiced. This process can be called in different ways: raising of Kundalini, Nivritti, etc. All practices, one way or another, lead to the expansion of limited consciousness and its merging with the superconsciousness "Parasamvit" or Consciousness of Shiva.

In Natha Sampradaya, the practice of recognizing of the inner sound of anahata nada is considered one of the most basic practices, "anahata" in Sanskrit means "unaffected" reality. The sound of anahata-nada is translated as "unaffected" or one that does not occur through the contact of two objects. Sound is a manifestation of thought, just as consciousness has its own gradation, so does sound. The practice itself is called "nadanusandhana", "annu" means "over", "sandhana" – connection, i.e. extreme immersion of the mind in nada and dissolution in it. This immersion in a more subtle sound vibration is reflected in consciousness: perception passes into emptiness, into the unknown, the beyond and becomes it itself, thought dissolves in its source – Chitta. Nadanusandhana is a yogic technique where sound is a method of immersing consciousness in the heart of one's essence, which dwells in Atman.

In this practice, you will know God within your being. Nadanusandhana is also called nadopasana (worship of nada), since nada is Shiva and Shakti. Nadopasana is reverence (but very direct) that not everyone is able to discover what is possible through good shodhana. Still, of course, the fruits of such internal practice, affect, in general, the psychophysical state of the practitioner, therefore, the internal practice is reflected in the body. The body becomes like a space, lightness appears in it and many other signs appear signalizing that the practice of the higher sections of yoga is going in the right way. In general, the body is not only a tool, as many yoga practitioners believe, it is also an environment in which the goal of yoga is finally realized.

Nadanusandhana begins with chanting Omkara or meditating on the sound of bhramari that is alike the sound of a bee. Here, of course, there are some subtleties – in the name there is the word "bhrama" (drone), this drone makes a dull sound, similar to the hum that you make when you inhale. And there is "bhramari" (female bee), it emits a ringing hum, similar to the sound we make when we exhale. Most often, the exhalation is called shunyaka, and it is more suitable for dissolving the mind, therefore, usually many use exhalation in this practice. Kumbhaka is a "jug" breath holding, there is no sound caused by the process of inhalation and exhalation during kumbhaka.

Usually, bhramari is classified as a type of kumbhaka, which can become kevali if you can hear the inner sound. It is no coincidence that this name is compared to a bee, as it collects nectar, but, in this case, bhramari allows you to collect Nada's nectar. This nectar is formed inside the body. The sound when inhaling and exhaling calms the nervous system, relieves stress, but the internal, unproduced sound already plunges into deep meditation, dissolving more inert states of consciousness. In addition, bhramari is the sound of anusvara itself, it is depicted as bindu – a point located on top of all Sanskrit letters, which are the petals of the chakras, nadi channels. We can say that the sound of bhramari is the sound of all the manifested sounds, in addition to everything else, at its completion, it passes into nadanta (a complete sound state associated with the silence of the mind). Since the mind follows the sound, when the sound stops, the mind also dissolves. In this state of emptiness, one can already move to a higher level of hearing sound from nothing, from emptiness and deeper immersion into it.

In Nadopasana there are still nuances, for example, different gradations of audible sound in terms of subtlety. Sound is associated with prana, therefore bhramari-pranayama helps, through prana and sound, dissolve the mind. It is believed that due to the silence of the mind, the inner Shakti begins to awaken and rise up through the chakras. Internal sounds are associated with the internal activity of prana, but this practice is of a higher level, it involves different levels of awakening Shakti and conscious power. Outwardly, the practice seems simple, but it all depends on how well you understand what is nada, what is anahata-nada, shabda-brahman, mantra as a manifestation of cit-shakti. To get the most out of the practice of nadanusandhana, one must really have a good understanding of the theory of this natha sadhana. In most cases, it is often viewed superficially by people, simply as a kind of bharamari pranayama.

Pranayama is just one of the methods that are easily comprehended, but there are deeper methods that lead to the maximum transcendence of human consciousness. Nadanusandhana is one of the main Natha’s practices, although the theories of nada themselves are found in many tantric schools and the corresponding practices too. For example, in Kashmir Shaivism there are also similar techniques, and even theories about the gradations of sound, its correlation with different levels of consciousness, like prana. Nathas mainly pay attention to the key points of the practices related to nada.