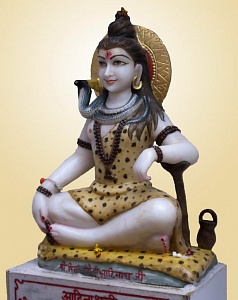 Shiva in the form of Adinath is considered to be the first Guru to tell the teachings of the Nathas. Being the source of all knowledge of Yoga and Tantra, He transmitted the secret truths to His disciple Matsyendranath, who in turn initiated Gorakshanath in them.

Shiva initially has no form, He is often identified with emptiness or unlimited light (prakasha), He is chit-shakti, unlimited consciousness.

Nathas worship Shiva in the form of Adinath, who is Jyoti-svarupa, the essence of spiritual light.

He is a symbol of the unmanifested transcendental reality "Shunya" or "Akula".

Adinath, revered by all yogis as perfect Maha Yogeshvara, free from all attachments, limitations, unaffected by ignorance, ego, feelings of addiction and aversion.

He is eternally filled with infinite wisdom, knowledge, strength, as well as infinite love and mercy.

He is unborn, immortal, eternal master of all manifested beings and eternal source of spiritual inspiration for all seekers of truth in this world.

He is Ishvara in the Yoga Sutras of Patanjali, and Shiva – the Supreme God of all gods – in Shvetashvatara Upanishad.

He is the Supreme Spiritual Personality, eternally enjoying absolute happiness in His transcendental nature, eternally manifesting His own infinite strength and beauty in various manifestations, in this magnificent cosmic system.

He is the one who constantly shows His mercy to all sincerely and seriously seeking truth, peace, beauty, perfection, and self-realization.

It is believed that He manifests himself as the Absolute Truth and the universal Yoga system, that he is the original author of the Agamas (or Tantras), which represent the spiritual basis of the Yogic system.

A story is correlated with Adinath, which is somewhat like the early Vedic descriptions of the creation of the universe:

Adinath emerged from the emptiness (shunyata).

Shiva Adinath's Shakti is Ketaka who is manifested from the mouth Brahma, from the forehead of Vishnu and from the yoni of Shiva. Legend says that Adinath decided to test this trinity of Gods and turned into a corpse floating on water. Brahma saw him and pushed him away with his foot, Vishnu simply walked away, and Shiva took him in his arms to cremate him later. When being cremated from the smoke emanating from the parts of Adinath's body, the most famous Nathas appeared. From the bones – Jalandharanath, from the hair – Gorakshanath, from the navel – Matsyendranath, from all parts of the whole body – Chauranginath.

Adinath was Shiva himself, known as Rudra, so as Adinath’s Ketaka and Gauri are one Shakti of Shiva. “Keta” means desire, it is the will of Paramesvara Adinath. The eternal Nija Shakti is often associated with Ketaka.

1.5. “The unnamed (Absolute) is Self-Existing (Parabrahman or Shiva), Beginningless and Perfect, One, (in which) cease to exist (existence) of place and (time). He is sung in the Siddha tradition "Siddha Siddhanta". Glorified, His Shakti (Nija-Shakti) that is inherent to Him, following His will (manifested) as dharma and adharma..."

In India, many believe that Adinath was a historical figure who lived somewhat earlier than Matsyendranath and Gorakshanath. Adinath is portrayed, like all Natha-siddhas, in the human form of a yogi. Among the Nathas, as in Tantric Buddhism, teachers are usually associated with the gods and guru-yoga has a special meaning. Therefore, many teachers are portrayed as incarnation of the deities of the Indian pantheon. It is no coincidence that in many Natha texts – Hatha Yoga Pradipika, Gheranda Samhita, Ratnawali, and others – one can find from the very beginning a listing of Natha teachers and their glorification. This veneration of teachers is similar to the veneration of bodhisattvas in Buddhism.

Adinatha’s archetype in the Vedic tradition can be correlated with Hiranyagarbha or the sacrificial Purusha of the Rig Veda. Patanjali refers to Him as Purusha-Vishesha, and Muslim Naths in Pakistan and Afghanistan consider Adinath as Adam, one of the first five prophets, i.e. Adinath for them is Adipurusha – the first man. Jains consider Adinath to be the first Tirthankara. Each of the famous traditions had their own nathas, for example, in Vaishnavism – Jaganath and Jnaneshvarnath, in the Shaiva-siddhanta – Nandinath, among the Virashaivas – Allamanath. Nathas themselves, as mentioned above, believe that the Tradition goes back to Adinath, and even more that He was before Shiva, and Shiva manifested from Him along with the rest of the Deities.