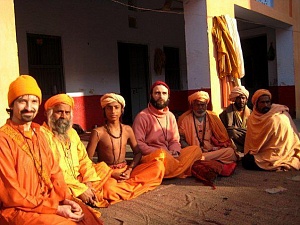 Vairagya वैराग्य derives from the words वि "vi" (abandonment) + राग "rāga" (passion, lust). Suffix य "ya" in the end is the change of root vowel just like in triloka transforms into trailokya, or triguna into traigunya etc. Word "rāga" comes from the root रञ्ज् "rañj" (coloring), the meaning of which is “coloring senses” in contrast to transparency and purity. Color can also be associated with varṇa वर्ण – belonging to a particular social class, where varna is also translated as color.

There is even a certain specificity: brahmans are spiritually connected with white color, kshatriyas – with red, vaishyas – with yellow, and shudras – with black. They have their own relationship between varnas, where a representative of one varna will not sit at the table with a representative of another varna, since some kshatriyas, for example, ate rajasic food, which the brahmans avoided, etc. There is a color of the prevailing energy, and a person lives and develops in it. It is not a coincidence that varna comes from root वृ "vṛ" (to cover), and the vairagas (ones who follow the path of vairagya) throw off these “covers”; as a rule, those who have gone beyond the realm of limitations are sannyasins, avadhu (-ta) etc.

Detachment is one of the basic qualities of God. The abandonment of all identifications with the world makes yoga a full-fledged practice according to the ideas of Naths. Those who practice sadhana often do it out of vanity, out of pride in their theoretical knowledge of spirituality, seeking to enjoy their subtle ego under the guise of yoga, and therefore, only through renunciation can one become a true avadhut and a detached yogi.

And, at the same time, vairagya is unthinkable without social realization, because life itself is a mean for burning the vessel of the practitioner's detachment, thus becoming "adhara" for the development of this quality. The society is unstable, changes are constantly taking place in it, therefore, in order to gain peace one must be able to avoid attachments to various manifestations of this world. When there is a feeling that the world has gripped us in a vice, depriving our own self-consciousness, this is a sign of a wrong attitude towards it.

Internal vairagya is one of the main criterias for someone practicing yoga-sadhana. It should be attained gradually: a practitioner must first put his physical body in order, improve his health, solve common human problems, and then start working with the inner aspects of his Self, because it is impossible to learn detachment if there is no understanding of why it is needed, and what is the great value and effectiveness of this approach.

Nathas and Tantra texts say about the combination of yoga and bhoga. The world is overflowing with bhoga (pleasure, enjoyment) and yoga has also become a part of this world, although its very essence is to rise above world illusions, which leads to the acquisition of sat-chit-ananda (being, consciousness, and bliss), kaivalyananda (the highest God-like state), after which the practitioner understands who he really is. There are many transient pleasures in the world, they are also true, but their truth is also transient, therefore none of them can be idealized, no matter how it seems to fit the motives of tantra and gnosticism.

Practice is what makes a practitioner adequate in this world, makes his actions effective, practice teaches how to get a positive result at the minimum energy losses. Yogis are mature people, they do not need abstract theories, they do not see any value in theoretical sannyas and theoretical concepts of the highest reality to the detriment of its holistic perception. In fact, yogis renounce not the world, but obsessive, superficial beliefs, and belief systems.

Vairagya is inherent in our nature, and it can be revealed by the Guru

The attitude towards vairagya is often negative because it has become a part of society, and not a property of the soul. In fact, this is the true nature of a living being, and it doesn’t need to be somehow created, it is inherent in our very nature. Vairagya awakens when one naturally attains the maturity of the soul.

Guru can reveal detachment in a disciple. Guru who has realized a non-dual consciousness and who wishes for his disciples what he desires for himself. If Guru is a realized pure soul, then he sees the divine in the disciple, and he awakens this divine. Through further practice, the student already realizes this state fully. For a real disciple, Guru is transcendental, and if disciple adheres to this vision, he will be able to reveal his true nature and renunciation will come of itself.

Human beings are very weak, depend on society, dependend on climate, on senses, on the body and everything that makes it up, they are oriented towards the outside world. For this reason, no mere mortal can become jivan-mukta by following his imperfect mind. We can understand something sublime based on empirical experience that points us to something higher.

Nathas teach that everything perfect has always been with us, is and will be, we just cannot perceive it because of our karmic accumulations, so we need to learn to see the highest in this world. If you see the highest in the Guru, it will return according to the principle of a mirror. One who sees siddha in another can perceive himself as a siddha, and such a vision should be cultivated by an imperfect person. But in this world, under the influence of Maya, most often imperfect beings tend to act differently, trying to find the truth in sophisticated methods with the hope that this will lead them to realization, while in fact not following them in real life.

Therefore, siddhas like Gorakshanath were not interested in the external names of traditions and philosophical doctrines. The Aughar, who saw the essence of all of them, immediately becomes an avadhuta. Avadhuta is outside all sampradayas, but he is open to all teachings, because he is a true vairagi, his consciousness is empty, therefore he has a complete picture of the world. Anyone who has seen the whole world will understand that it is pointless to change it for any one part, because vairagya becomes a normal phenomenon for a yogi. Vairagi is like a king who disguised himself as a beggar, but at any moment can give up this game, because he always remembers what is eternal and what is not.

Since for the representatives of the varnas, the vairagis and sannyasis are a kind of "portals" to the other world of freedom, they are hierarchically considered as Guru in the Indian world. That is why one may wonder seeing the following picture in India: when sadhus in the temple are being served by brahmanas who are perhaps even more literate than this sadhu, the sadhu may not know well Sanskrit, Karmakanda, etc. Or, for example, now, when in India yoga is also Westernized for worldly people, you can meet a yogacarya who teaches Hindus gymnastics, but he honors sadhu who does not bend in asanas. This is why yoga is traditionally connected with the "transparent, pure world of peace", and not the ability to "passionately do gymnastics". In India, no matter how they are overgrown with outwardly Western elements, in general, somewhere on the "spiritual-genetic" level, it is still clearly stated what is real yoga and what is not. This is reality – above flowers, above smells, above tastes, etc. sadhus and Gurus, advanced sadhakas teach precisely with the energy of these worlds, therefore he may even be illiterate. They can teach with their silence too.

What is perfect Vairagya?

Complete detachment is paradoxical for a Western person who is historically programmed by the Abrahamic, dualistic consciousness (maybe Kabbalah, Sufism, etc., are a little exception to this). The Indian consciousness, if someone had time to notice, combines differences, and this has doctrines that have been grounded for centuries. How, for example, can Christian combine fanatical faith with sometimes seemingly cynical behavior? Or how can the offering of the most impure substances to the Divine be regarded as the highest form of worship? Even foul language (it is also developed among them) can be a special form of Divinity, it is enough to look at some of the instructions for Pashupatam, Kapalik, etc. But, of course, one must be careful and properly study the essence of such elements, their doctrines.

To put it in a nutshell: perfect renunciation is the ultimate detachment from the outside, combined with the ultimate immersion in the outside (which, as a rule, is not burdensome). The process is two-sided, but the first state should always prevail in it over the second, despite their interdependence. One is the "testing", "regulating" element of the other.