Forms of Ganapati and the Meanings of His Attributes

Many forms of Ganapati are mentioned in various texts, up to 56 in Ganesha Purana. Some of Ganapati’s names emphasize the possession of one of his significant attributes and each has their meaning. Here are the explanations for some of them.

Among the many names of Ganesha there is ākhuratha (आखुरथ) – "one whose chariot is a mouse." This epithet name consists of the Sanskrit words ākhu (आखु, mouse) and ratha (रथ, chariot). It is less popular than muṣakavahana (मुषकवहन) but has the same meaning.

There are many versions of the appearance of  Ganesha’s riding mouse. According to Ganesha Purana, in the Dvapara Yuga (the second of the four yugas), Ganesha is born under the name Gajanana as the son of Shiva and Parvati in order to kill the demon Sindur.

The heavenly creature Krauncha, cursed by the great rishi for carelessness, incarnates on earth in the form of a mouse. Rishi predicts to the repentant Krauncha that he will be freed from the curse when he is saddled by Gajanana. After the battle, Gajanana subdues him and makes him his mount. Together, Gajanana and his vahana defeat the demon of Sindur. It is thanks to this victory that this form of Ganesha has a purple complexion, assimilated from the defeated enemy.

John A. Grimes in his book "Ganapati: Song of the Self" mentions a Puranic legend according to which all the gods brought gifts to Ganesha at the naming ceremony, and Prithvi gave him a mouse that could serve as a riding animal.

Ganesha’s Vahana has a mystical interpretation. The mouse symbolizes the lower mind, greed, and uncontrollable feelings. Derived from the verb muṣ – "rob, steal, obscure the light of the intellect", the name "muṣaka" means "acquirer" or "thief". The mouse is small but gluttonous and tends to steal more food than it can eat. Similarly, a seemingly insignificant desire, penetrating into the mind of a person, is capable of destroying him.

Thus, Akhuratha is a symbol of the ability of higher wisdom to control the mind overwhelmed by desires. The thief can be tamed to become a friend. 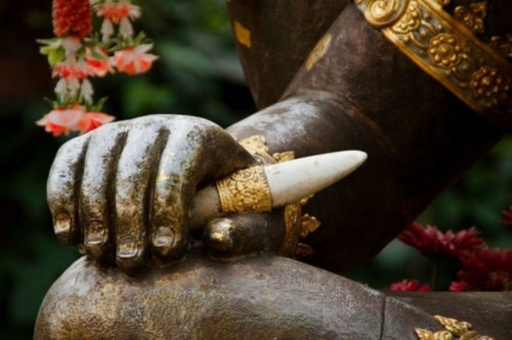 Pillayar (Tamil: பிள்ளையார்) is a form of Ganesha common in southern India, analogous to the form called Ekadanta in Sanskrit. Both names refer to the single tusk of Ganesha – the words danta (Sanskrit) and pella (Tamil) mean "tooth" or "tusk". Also in Tamil, Pille is "child", and Pillaiyar can be translated as "noble child". Some scholars also believe that pille should be understood as a "young elephant".

One tusk of Ganapati can also be understood as an indication of His amazing power to bring the mind to a state of one-pointedness (ekagrata).

Puranas contain a number of legends explaining why Ganesha has only one tusk. According to one version, Ganapati served as a scribe for Vedavyasa, and when his stylus broke, he broke off his tusk so as not to interrupt the work.

The texts say that in his incarnation as Ekadanta, he defeated Madasura, a pride-intoxicated demon who pursued the gods. The sage Sanatkumar instructs the devas to propitiate Ekadanta. Describing the virtues of Ekadanta, he says that eka is manifestation (maya) and danta is truth (sat). “Thus, Ekadanta represents the Supreme Truth or Brahman that dispels Maya,” which is signified by the tusk (the hardest part of the physical body). 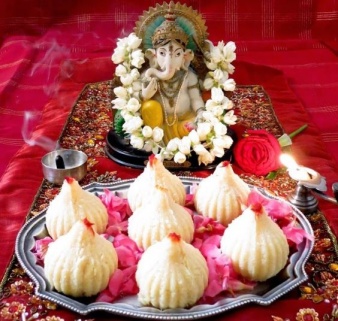 Modakapriya (मोदकप्रिय) literally means "lover of sweets". The word modaka (मोदक) refers to sweet stuffed balls made from various types of grains that can be seen in the images of Ganesha – in his hands, trunk, tusk or bowl. The word moda (मोद) means bliss, ananda, and ka (क) means a small portion.

Thus, "modaka" is "a small portion of bliss." The modaka is shaped like a coconut, just like the cavity in the Brahmarandra. When Kundalini reaches this cavity, ananda is experienced. Ganesha's single tusk is directed towards the modak and indicates that He is constantly focused on pleasure, which is a reflection of supreme bliss. Bliss is also the highest gift that he gives to his devotees.

Esoteric traditions such as Ganapatyas consider modaka to be a symbol of the seeds of life. The huge belly of the deity is a designation for a vast space that can accommodate thousands of modak, just as the universe accommodates countless living beings. 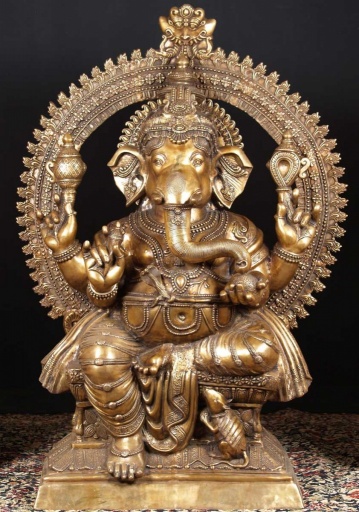 The direction of Ganesha's trunk is not arbitrary but carries a symbolic meaning.

The trunk pointing to the left (edampuri) is associated with the lunar energy of calm, bestowed by such a form as vastu ganeś (वस्तु गनेश्). The trunk directed to the left, in which the sweetness laddu is clamped, denotes the gift of material wealth to the devotees and is a form of varada-mudra, unique for iconography. It is believed that murti with such a trunk is more suitable for location in the house, giving peace and prosperity to the dwelling.

The trunk pointing to the right (valampuri) is associated with activity, solar energy. This is a rarer variant of iconography than the trunk turned to the left. 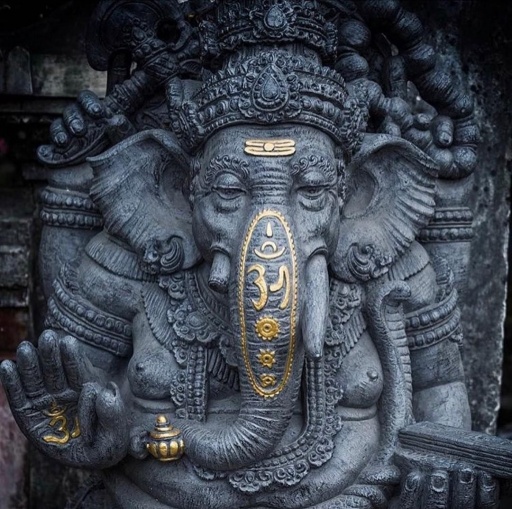 Forms such as dakśinabhimukhi (दक्शिनभिमुखि) and siddhi-vinayak (सिद्धिविनयक्) are depicted in this way. The trunk directed to the right, in which

Ganesha holds a vessel with nectar, symbolizes the gift of spiritual accomplishments and moksha. Worshiping such forms of the deity brings quicker results. Valampuri Ganesha murti is best placed in the office or at the place of work.

The rarest form of Ganesha is with a straight trunk. This position symbolizes the opening of the Sushumna nadi and is found almost exclusively in temple sculpture.