About full sannyasa and kuṇḍalas in Natha Sampradaya 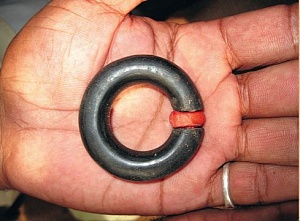 Full sannyasa in the Nath tradition is the highest initiation, which is called kānphaṭa or darśanī. Such an initiation means a new spiritual birth, and it assumes that the one who received it is free from all the objects of the world, without having any property in the material and immaterial sense. Some sadhus, such as the nagas, do not even have clothes, and the sadhus of the Jain order, the Digambaras, are considered to be dressed only in the space of the cardinal points.

Sannyasa means that at birth in the higher spiritual world, all objects of the material world are sanctified by transcendental light, since the Highest Reality is not only transcendent in relation to samsara, but also permeates this samsaric world.

Human consciousness is a part of the Absolute consciousness of Shiva, and at the same time, it is initially identical to him. When the worries vṛtti disappear and manas (mind) comes into an even state, then the light of the true Self, or the consciousness of Shiva, enlightens the whole nature of a person and all the objects of the world with which he comes into contact. The world around is considered as means for spiritual development, and the physical body – consisting of cosmic elements Maha-bhutas, and Atman – identical to Paramatma. Thus, the Universe is felt by the yogi as integrated into his psychophysical structure and is not seen as something distant, as it may seem to our limited mind.

Sannyasi has only the bare necessities for sadhana and devotes all his time to spiritual practice. In the Nath sampradaya, Nath darśanīs usually use certain yogic attributes in their sadhana and rituals – the minimum that is always with them, whether they live in a temple or wander. One of these attributes are kuṇḍalas – special earrings that Guru inserts into his disciple’s centers of the ears during receiving chira-diksha. Kuṇḍalas mean complete sannyasa.

In some books written by Western authors, the description of kuṇḍalas is often found as "inserted into the lobes of the ears", but it must be said that this is an incorrect description. Kuṇḍalas are inserted exactly in the center of the auricle, because there are special points that are associated with the lunar and solar currents and help transform sexual energy, contributing to the awakening of Kundalini Shakti.

The two kuṇḍalas symbolize the integration of the Moon and the Sun, Shiva and Shakti, these two polarities are united in the eternal Atman. The kuṇḍalas help direct the currents of energy into the Sushumna, and the yogi gradually learns to control svaras. One of the success criteria is the ability to change the flow of air in the nostrils at one’s will.

Kuṇḍalas should not be removed. It is believed that a Nath who removes kuṇḍalas after receiving them can harm his psychophysical state. If there is a need to change them, when, for example, Guru gives new kuṇḍalas, then one kuṇḍala must be removed and replaced first and then the other.

The very custom of wearing kuṇḍalas goes back to Shiva. He is depicted with earrings in his earlobes – these are attributes symbolizing the sun and the moon. Shiva wears kuṇḍalas in his lobes and not in the center of his ears because he is beyond all his external energies. He is in his usual state like a corpse and only through Shakti manifests his creation.

Kuṇḍalas in the center of the ear mean the absorption of all the elements of creation in oneself, therefore, on the one hand, such kuṇḍalas mean the manifesting Shiva – the Maha Yogi, on the other hand, absorbing the entire universe with his Atman. Accordingly, the transcendental union of Shakti and Shiva is Yamala, represented in the very mind and body of the yogi. The body of yogi is the body of Shiva, who, thanks to nija-shakti (his own power), creates and destroys the entire existence.

It is believed that Shiva instructed his disciple Matsyendranath to wear kuṇḍalas in his ears, as a sign of a yogi who combines the manifested and the unmanifested. Further, this custom was passed on to Gorakshanath and Bhartrihari, the ruler of Ujjain, who, in turn, asked Gorakshanath that all nathas of 12 panths wear kuṇḍalas, which would distinguish them from other sadhus. Bhartrihari was the eldest son, and according to Indian customs, the whole kingdom was supposed to go to him, and in many ways, he did not live up to the hopes of his family. Later, Bhartrihari's wives died and, after the death of the latter, he went into the forest, where he met Gorakshanath, who showed him all the illusory nature of consciousness, materializing his wives, and then dissolving them in emptiness. Bhartrihari had never seen anything like it, and despite his life full of pleasures, he left the throne and became a yogi who achieved many siddhis.

Ujjain has several hills (sacred pedestals) dedicated to the apparitions of Bhartrihari. It is believed that he gained the ability to materialize and dematerialize his body, and as soon as he reveals himself again to his bhaktas (for the ninth time), he will be listed in the lists of Navanathas. Bhartrihari founded Vairag Panth. It was from him that the custom of performing parikram on all siddha pithas before taking sannyasa, leaving all identifications with the world, acquiring the qualities of “tyagi” (abandonment) and “vairagya” (detachment), without which, according to Nathas, all yoga will not be complete. Bhartrihari told Gorakshanath that those who practice sadhana often do it out of vanity, out of pride in their theoretical knowledge of spirituality, strive to enjoy their subtle ego under the guise of yoga, and therefore, until they prove their renunciation, they cannot be considered avadhutas and detached yogis. After listening to Bhartrihari, Gorakshanath, or rather Shiva Yogeshvara himself, gave a blessing to wear kuṇḍalas, the same as his, and Bhartrihari was the first Guru who became a darshani. The level of his renunciation was evident, as he left all his wealth, just as Matsyendranath did in his time.

In the Natha Sampradaya, the custom of cutting the ears also became a kind of test for detachment from the body. Preliminarily, the dikshita is trained by communicating with Nathas and adopting their wisdom and practical experience. He must prove his commitment to the teachings and the path of yoga. When the Guru sees that the disciple is ready, then he gives his disciple "chira-diksha", which is also purna-sannyasa. Without pain, the ear cartilage can be cut only when the sadhu has qualitatively entered the state of pratyahara, at which time the Guru tells the student to concentrate on the mantra and move away from all other objects in the world. Usually, after cutting the ears, about 30-40 days should pass, during which the yogi should stay in one place and constantly perform japa, and at first no one should see him, except for his own Guru. It is believed that at this time Gorakshanath is invisibly present in this space and in the yogi himself, and he can get a darshan of Gorakshanath. After chira-diksha for some time the most powerful transformation of the entire psychophysical structure of the practitioner takes place. Kuṇḍalas integrate all paired parts of the body: arms, legs, ida and pingala, the whole body becomes "united" like a ball. Distractedness and restlessness of "chitta-vikshepa" are also eliminated in the mind. Kuṇḍalas received from the Guru also protect the yogin from bhutas, pretas, pishachas.

It is believed that those who have seriously embarked on the spiritual path of moksha are always subjected to severe trials on all levels, because sadhana in this case is a challenge to many forces that are responsible for regression, and a real yogi will have to go through trials by these forces. In this case, the path to moksha and liberation can be compared to escaping from prison. When the prisoner remains in the cell, the guards are calm, but when an escape is made, the alarm is turned on and the hunt begins. For a real practitioner, the dark and light sides of many phenomena are better visible, he knows the power and strength of the dark side, therefore he cannot afford to “sleep” as simple beings sleep. Having become a darshani, a sadhu challenges very serious forces and no longer has the right to leave the path that he himself has chosen. Therefore, leaving the sampradaya and removing the kuṇḍalas means depriving the Guru’s and Tradition’s protection leading to the vulnerability and openness to various forces.

Kuṇḍalas, on which the mantra is recited for 12 years, have tremendous mystical power. Their strength and the acquisition of the corresponding siddhis also depend on the material from which they are made. Here are some of them: tamba-kundal (copper) – khechari-siddhi (amritpan-siddhi or kaya-siddhi); sochana-chandi-kundal (gold-silver) – riddhi-siddhi; sphatika (precious stone) – bhocari-siddhi; clay – jnana-siddhi.