01.11.2017 Yama and Niyama: brief review
Yama-Niyama are the principles of spiritual life, based on which yogi, practicing spiritual practices, becomes perfect. In other words, Yama-Niyama is the boat in which you are sitting, and spiritual practices are the oars, the motor and the map, which by the grace of Guru lead you in the right direction, thanks to your efforts. Without a boat, you are most likely to be eaten by sharks or will simply drown: the ocean of life consists not only of sunny moments. There are different variations of Yama-Niyama, but they are all alike. Read more>> Tags: :  yoga sampradaya nathas
Author: Lakshminath

04.09.2017 Khecarī as a mudrā, mantra and a Goddess
There are many practices and elements of one or another practice under the name of khecarī–mudrā, for the reason that in India every spiritual path introduced something of its own. For example, in Gorakh-bānī, khecarī-mudrā is one of eight mudrās Read more>> Tags: :  yoga mantra sadhana mudra


A lot of people might wonder what human karma and sanskaras are. Whether it is one’s nature or an offspring of karma.

Karma means a deed which leads to some result. Committing some action leaves an imprint (sanskara) in the soul, namely in the karana-sharira (the causal body). This imprint is carried through life and after some time it germinates.


Hatha yoga is inseparably linked to Raja yoga. This connection is explained as based on the nature of the perfect, nondual state, attained by the Yogi in samadhi. It means the nature of Perfection originally involves the unity of these two yogas.

Accordingly, irrespective of our perception of asana, it primarily contains "the stable light state in which the mind remains in its authentic form". I believe it is what one should strive for. 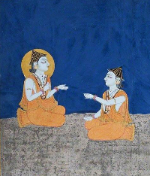 
I permit to myself some personal thoughts on the most important, in my opinion, relations, without which any spiritual practice is impossible. There is one general opinion – if you have Guru, you have nothing to worry about. But that is true only in case disciple is devoted to his Guru to such extent that he is absolutely convinced he will reach the desired aim with the help of Guru.