17.02.2022 Forms of Ganapati and the Meanings of His Attributes
Many forms of Ganapati are mentioned in various texts, up to 56 in Ganesha Purana. Some of Ganapati’s names emphasize the possession of one of his significant attributes and each has their meaning. Here are the explanations for some of them. Read more>> 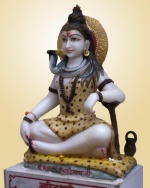 16.06.2021 Adinath
Shiva in the form of Adinath is considered to be the first Guru to tell the teachings of the Nathas. Being the source of all knowledge of yoga and tantra, he transmitted the secret truths to his disciple Matsyendranath, who in turn initiated Gorakshanath in them. Read more>>