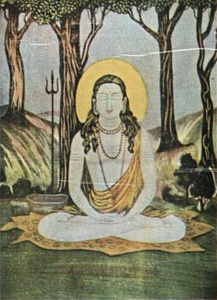 
«44. Guru is Brahma, Vishnu and God Maheshvara. There is no one higher than Gurudev, therefore one should always serve Him.»
Amanaska-yoga

In Nathas tradition Amanaska is a part of taraka-yoga (prana-yoga, shakti-yoga), in the practice of which the light of consciousness is amplified through Kundalini-shakti as Vimarsha (the aspect of self-observation of Supreme Reality, which is also responsible for all processes in the manifested Universe). This intensification of the light of consciousness leads to unmani-mudra, or the state of Shiva as superconsciousness. These two practices – Purva and Amanaska yoga, are the main ones. In Purva-taraka there is your ego, and there is a process of being aware of all that you are able to be aware of, in this process your consciousness and subconsciousness are involved. In Uttara-taraka, superconsciousness is involved, while you don’t even make an effort to sustain awareness, Shiva himself through you is aware of his game. In the second state, there is no ego, you don’t think or plan anything, and at the same time everything always develops in all respects in the most ideal way, this is the path of sahaja.   Amanaska yoga includes preparatory practices in the form of concentration on sthula, sukshma and jyotir objects, meditation on lakshyas and vyomas; then the level of the temporary trance state (savikalpa-samadhi) is reached, and at the highest level – nirvikalpa. Although nirvikalpa-savikalpa, videha-sadeha (jivan-mukti) are all very relative on the conceptual level. The space of Nirvikalpa-samadhi is present everywhere, and when it is said that it is like pralaya or death, this doesn’t necessarily mean what it may seem to us, i.e. it is the truth in experience, not in theory.

«113. Knowledge of the true nature is manifested through the purity of abhyasa, tranquility, service to Guru – [and it takes place] by the grace of Guru.»
Amanaska-yoga

Based on materials:
«Sidha-siddhanta padhati and other texts of Natha Yogis» / translated from Sanskrit by and with the comments of Guru Sri Yogi Matsyendranath Maharaj. - M :, International Natha Yoga Center, 2009 .-- 278 p.