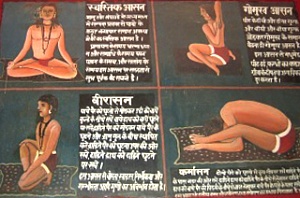 There are different ways of understanding the concept of asana. Much depends on the level of perception of the people who practice them, and on the goals that certain people follow. People who are more focused on the material result, even if it is associated with changes in the body, perceive work with asanas, first of all, as a physical component of our being.

Therefore, for such people, the stages of mastering yoga as a sadhana are, in general start with health exercises and a little work with energy. After a years of practice if such a person intuitively understands that he has exhausted that level of sensations, only given by the physical perception of the body and asanas, as a method, he begins to look for ways to work with consciousness. This way of practice is done rigidly delimiting the levels of perception of himself as body and consciousness.

Thus, if this person begins to be more interested in traditional sources of knowledge, he understands that for a complete perception of work with the body (as a multi-level component), an integral approach to the study of yoga is needed, i.e. there is a need to study such concepts as the metaphysics of yoga and mantras, which allow you to understand the connection with the Divine better, tantric rites, which are associated with both consciousness and the general worldview and the concept of "body" in particular. As a result, such a person comes to a full-fledged version of sadhana as a spiritual discipline.

For knowledgeable people who initially perceive yoga, not as physical education, the sequence is different: the first is external rituals, mantras, yantras and then the transition exclusively to their internal version, when all the rituals and symbolism are projected onto the body and where the body acts as an object for contemplating various levels of Genesis. So there are two approaches. Both are true in their own way, but the second one explains why Nathas who live in India do not practice such an abundance of physical exercises in contrast to what yoga is commonly perceived by most Western people or ordinary Hindus.