Meaning of Time in Nath tradition 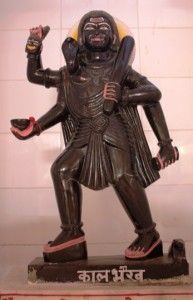 Time, in Nathas worldview, is the essence of Shakti, the dynamic aspect of Shiva. Tantra names given aspect of Shakti Kali, while whereas in Nath tradition the highest manifestation of the Goddess is Yogamaya Balasundari. Special yantra is used for her worshiping. Yantra is divided into four parts, symbolizing the four yugas - time segments of the universe. In the middle is Balasundari herself in yamala (union with Shiva). Balasundari is Nija-shakti of Shiva, Kundalini.

Nathas consider time as Shakti, within which the practitioner constantly resides in his pursuit of Kundalini awakening, and therefor time for Nathas is not just a certain material element, but also has deep spiritual meaning. Shakti embodies the creative dynamic reality of Shiva, that reflects the essence of time – continuous change and transformation, while Shiva is a static reality that is related to space. Here space implies not only the physical, but also its transcendent aspect.

This means everything in the world consists of different spaces and times, while yogi cognizes the ultimate form of time and space, going beyond limits. Being liberated, he becomes time and space, pervading everything himself. This can be achieved only by the grace of the true Guru, through which the ultimate time manifests, and who is beyond the limits of time. To an average person it is very difficult to perceive ultimate time because of his limitations and attachments. Time is in his mind, and the more limited is the mind, the more space and time are limited for him. By practicing yoga, mind connects with prana, and becomes more active, the consciousness expands and Kundalini-shakti awakens.

In the regular state, human consciousness is blocked by limited understanding, concepts, systems of beliefs, religions and the influences of cosmic objects. As a result, the world is perceived unevenly, a person tries to stick to a wide variety of internal states. It is possible to exit this labyrinth and become free only with the help of sadhana and the Guru, who supports and guides in the development. "Siddha Siddhanta Paddhati" helps us to expand the understanding of time. This text describes the relationship between the macrocosm and the microcosm. Absolute is being revealed through Shakti, as a result the transcendental body of Shiva, Para-pinda, appears. Initially, Absolute is transcendent and it can`t be defined by any terms. Para-pinda is its first manifestation, where the Absolute gets personality who is transcendent and supremely perfect, because it is formed by the yamala of God and Goddess.

Para-pinda is the supreme personality of Shiva. It consists both of ultimate time, and all limited manifestations of time and space. In it all other bodies are born, that also preserve these transcendental qualities of Shiva. Nath sampradaya is special in a way that it contemplates body of the living being as perfect and identical to Para-pinda, unlike some other teachings, where body is considered as limitation and essence of any sin. The differences between the Para-pinda (the body of Shiva) and the Prakriti-pinda (jiva’s body) in Nath tradition are conditional and are used for a deeper understanding of the essence of metaphysical processes. Now let us examine five manifestations of "individual time", described in "Siddha Siddhanta Paddhati" in the following shloka:

"54. Calculation, shaping, wandering of thoughts, besotted, meaninglessness – these are five qualities of time "

kalanā - compulsion to calculate the time intervals associated with different periods. There can be so-called "turning points" in ones` life. These turning points reflect time intervals. For example, someone studied at the college, and then went to work in another city, etc. During the lifetime people can have several such turning points, that radically change their life, and the more such turning moments happen, the more reasons to say that person is being changed spiritually. It is not necessarily external changes or spiritual growth; it can also be some deep rethinking of oneself and the world or the involution of spiritual development. A person able to permanently undergo inner transformation becomes time himself, he becomes a sort of mystery to others, but he sees how other people live, that their life proceeds in the usual course and does not change at all. The ability to change internally is a necessary quality for spiritual development. He who consciously works with karma, is able to see the hidden interrelationships of various objects; he foresees the sequence of events and actions of many people. Man sees patterns in everything that happens in the world and his own life.

kalanā is the ability to figure out and see how events or different objects coexist, how they are interrelated, and how they interact in time.

bhrāntiḥ - delusion, confusion, wandering. Chaotic state of thoughts, which occurs at certain intervals. Usually one says that a man has cut the ground from under his feet and at that moment he does not have the clarity of his thinking. Many people may have the reflexivity of thought, and it is a consequence of the crystallization of consciousness, its narrowing and contraction. Then the thought does not fit into the general structure of the changes in the world and in himself, and this is called personal misconception.

pramādaḥ – loss of orientation in time. This term is similar to bhrAntiH, but with a longer failure in time losing the ability to see diversity of time. Time is the Goddess, which intoxicates jiva, but if one sees all of Her diversity and greatness, She frees of all illusions. Bhakti and intoxication with illusion are at first sight similar, but there is a very big difference between them. The intoxication of Kali, in fact, is the highest sobriety and adequacy, awareness in everything. Kali kills demons who want to get joy of her and subordinate them.

ānartha means meaningless, failure as a consequence of ones attachments, which occurs when a person hopes to find happiness where there is none, or he is waiting for something to happen while it won`t happen; when one is not able to leave behind that what stops him from changing in the positive direction of liberation from his spiritual limitations. At each moment of time, we are simultaneously influencing all the times, so at every moment we should try to see ourselves as perfect. Many people are afraid to see themselves in this way, but at the same time they accept their imperfections and die in an inferior state, followed by a new birth. Because of their unbelief in their original purity, they sometimes fall into limited states, forgetting a significant part of their experience, including past lives. It is not essential for Nath to believe in that or another concept, but Nath always knows that he can`t lose perfection, all phenomena are nothing else than our own consciousness, no matter what these phenomena are. When yogi resides in a state of rest, he sees and knows everything, there is not a single state of happiness that would stay outside of him, all the delusions or suffering of the world are also part of him. In a state of higher realization of yoga, a person becomes none and all at once, all restrictions, including temporal and spatial ones, disappear. In the interpretation of time in the Nath tradition, the worship of Mahakala Bhairava plays very important. "Bhairava" is the manifestation of Shiva, "Kala" means "time," and "Mahakala" means eternity. Thus, Mahakala Bhairava is the manifestation of Shiva in the aspect of the Great Time or Eternity. Practically in every Nath's temple there is murti of Mahakala Bhairava, to which pujas are often performed. It is believed that by honoring Shiva in this aspect, sadhaka tunes his inner perception of time with the great universal process of infinity and the identity of the macrocosmic processes integrates into the practitioner's microcosm. Mahakala Bhairava is also welcomed in the morning mantra of Kala-gayatri, which is read after awakening. Mantra allows one to perceive evenly the flow of time and be able to correctly distribute activities during the day. The mantra is composed in sandha-bhasha language, which is a mixture of Sanskrit and Hindi (sometimes other languages). The power of this language is in its imagery and the multitude of meanings, with which words and sentences are colored.

The translation of the mantra sheds light on a truly profound understanding of the time by Nath-yogins:

Greetings to Guruji, Greetings to Kala Soham, Kala Mahakala, Immortal Kala, Horrible Kala, boundless Kala, impeccable Kala. Kala's cycle, the structure of Kala, the eternal Kala, creating Kala. The Twelve Kala liberate us from the lower acts. Life is connected with Kala through nada and bindu in four divisions. The great swan of time "Hamsa" wins by the instrument of nada and bindu, peering inside the body, finding the treasure. Three fires filled with water (of time) therefore yogi lives forever. The source of the universe is filled with the fearlessness of the saved yogi, whose knowledge is the true I of God. Such is the true Kala Gayatri mantra. The infinite level of siddhas is there. Greeting to Shiva, Greeting to Shiva, Adesh, Adesh! Greeting to padukas of Dada Guru Machindranath.