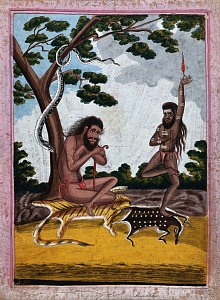 These asanas [as seats] play a fundamental role in any yogic practice, both in Hatha Yoga and in mantra practice. Asanas are required in pranayama because they eliminate the destructive effect of gravity on prana. Gravity is related to microlepton particles that affect our minds and vital energy. Energy and consciousness are interrelated, during the practice of pranayama, till a certain stage, changes occur in the consciousness of practitioner. The mind becomes calmer, however, even with some certain changes nadi are not always completely purified, therefore, the gravitational field of the Earth affects such "drawbacks".

For the maximum harmonization of prana most yogis recommend to do relaxation after the practice of pranayama, but it will be fully effective only if the space where it is practiced is purified by energy. The purpose of pranayama – to evolve prana and transfer it further to the more subtle level where it can nourish the mental and spiritual planes. If this process goes on in the correct way, then the developed prana of high frequency begins forming another inner environment of the energy structure. This environment, depending on the state of subtleness of prana and mind calmness (which are the same thing), varies the position of the center of the structure, which moves up through chakras.

In fact, it happens naturally if the area where you perform sadhana is pure and it depends on asana, where you sit. These things are not taught in any centers for some reasons. Firstly, there are no people who have actually accomplished this level; secondly, this practice concerns ordinary breathing exercises only indirectly. It`s not enough to do superficially various breathing techniques named bhastrika, surya bheda, sitali, sitkari , etc. for directing the state gained from them further to that level, where the plain breathing technique turns into the authentic pranayama.

An ordinary person who performs a technique, calling it hastily pranayama, just activates certain vayus in own energetic structure, which then return to their previous state. But the Yogi, having formed the required asana, directs this prana to the sphere, which transforms it into the spiritual energy of consciousness. As a result, he raises up Kundalini through sushumna and chakras.

While performing pranayama as well as during the practice of mantras such kind of asanas are used for the one purpose - to bring the mind to the pure and peaceful state, in both cases it plays a significant role. In mantra sadhana the pure mind facilitates the faster realization of mantra and while performing pranayama the pure mind subserves the transformation of vital energy into the spiritual one.

External cleaning of the space for sadhana assists in removing of all unnecessary obstacles, whereas mantra for asana and selection of definite asanas help to eliminate unnecessary influences on the subtle plane and attract those energies required for the attainment of certain Siddhi.

“39. Asanas (seats) of a good piece of silken cloth , blanket, sheet made of Kusha grass, the skin of a lion, tiger skin and deer skin are considered extremely pure, and only these are accomplishers of the desired purpose. Blanket is good for acts done from interested motives, but in this case the seat made of red blanket is considered the best. Seat of a black deer skins gives accomplishment of knowledge; Tiger skin - liberation; Kusha seat gives longevity; asana of silken cloth destroys diseases. A seat prepared by placing in sequence, first, the Kusha asana, then deer skin over it, and then on the top a silken cloth, gives success in Yoga Sadhana.

Now, causing pain or prohibited asanas (seats) are being described: by using earth as a seat one gets pain; by using wooden seat there is the beginning of misfortune; by using a seat made of bamboo there is poverty; by using stone seat there is suffering from diseases; by using a straw seat there is loss of fame; by using a seat of leaves there is insanity; and by using a seat made of cloth, there is loss of Japa, Dhyāna and Tapa. Therefore asanas made of these materials are prohibited. Householders should never sit on seats of the skin of a lion, tiger skin and skin of black deer without initiation from a Guru. Householders can sit on such asanas only with the permission of a Guru, but a chaste disciple has no need for special permission to sit on this asana. Sitting on a proper seat and reciting the name of the Rishi of Prithivi-mantra, - that is after reciting the meter etc in order of Meru-prishtha, and purifying the seat with "asane-viniyogah",when one comfortably performs Puja, then he can accomplish the desired objectives. Doing otherwise the performance of Sadhana becomes fruitless".

Making of asana and prescriptions for practice on it

What concerns the asana where you should sit, it can be made of a cotton material, wool; the cloth for seat should not be too dense, soft (like a mattress) or thin, for not feeling the stiffness of the ground. This is rather related to making it comfortable for sitting during the practice of pranayama, japa or dhyana, although, of course, the reasons for using such asanas are much deeper. In the usual fitness this topic is not highlighted, because it belongs to the yoga, which is called spiritual practice.

Without these asanas, for example, during the practice of pranayama, prana will go into the ground. In India it is believed that God Indra will take the results of your sadhana, if you will not use this kind of asana. This point I will explain in details firstly from the perspective of Hinduism, then in more comprehensible for most of us way.

Indra is considered as the king of Svarga loka (heaven plane), the so-called abode of the Gods. All possible successes and siddhi are granted only when the adept observes different rules, it means discipline. If he does not follow them, then in his actions there is a lot of carelessness, affecting the psychic environment of the space where the sadhaka is present, and therefore the destructive force annihilates results. In other words, Indra gives access to supreme powers only for those who are established in the purity of their "throne-asana." Your asana is what should be under your full control, you are the "king" of the place where you practice. Thus, nobody should stand on your asana, in traditional yoga and tantra this is an important prescription. There is even asana puja in tantra. What does it mean? Any puja expresses your intention "sankalpa", and puja reproduces the same processes that the Absolute manifests: creation, preservation, absorption. For example, you perform pranapratishtha (installation of vital energy in the space of puja) or avahana, then do japa and dhyana, and after this - dismissal with the energy of Devata which is called visarjana, or in some puja everything ends with Shantipat. Thus it turns out that you create reality, reinforce it and absorb back into yourself.

With asana-puja there is the same thing: you manifest its space from yourself, perform sadhana in it and take the results of sadhana back into yourself. If the energy is destructive during the puja, you in the same way will take it into yourself. Or it can be said in another way: you take the negative power, but the positive one will go, in short, it`s not what we need for practice. Purity of the space is significant for sadhana because it is the extension of yourself. Accordingly, in the classical sadhana it is important to sit on the asana correctly, checking the svaras, it means you should stand on asana by the leg corresponding to the active breathing nostril, and when you stand up from asana, touch it firstly by hand, and then touch your body. The principal spiritual centers of perception are the head or heart.

Is it necessary to have a particular seat for pranayama? Or the asana for puja can be used for pranayama as well?

For puja it should be a particular asana. Sukshma vyayama (work with the removal of blocks of muscles) and prana vyayama (set of breathing techniques for the development and activation of vital energy in the body) are not the same as the sitting motionless with the straight spine in stable asana with the steady slow breathing, accompanied by the mental tranquility. Therefore, a mat for the lower level practice of Hatha Yoga and asana for sadhana are still different things. If your body needs physical exercises, then in the beginning you can do them on a standard rubber mat, and afterwards having recited the mantra for asana in puja, proceed to the higher sections of yoga. It commences where techniques of hatha yoga do not subserve the wandering of the mind, but rather make it quiet. As a rule, it`s the quality practice of pranayama, mudras, dhyāna, mantra and rituals.

Are there corresponding asanas for particular Dieties?

Yes, there are nine principal deities and asanas intended for these deities which are used in sadhana. For Ganesha - silken or kusha asana, for Shiva - charmas (tiger skin, antelope skin), for Vishnu - silk, for Brahma – kusha asana, for Surya -kambal (blanket of coarse wool), for Saraswati – cotton cloth, for Kali - kambal, for Lakshmi - silk, or Bhairava, Hanuman - kambal. And of course, there are particular mantras for each of such asanas.