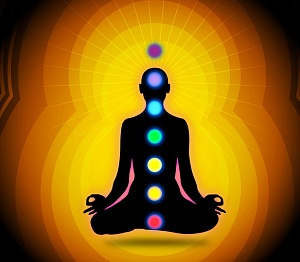 During dhyana you dive into an object, the sense of ego becomes simultaneously lost and perception of the object prevails. All dhyana practices imply identification: for example Sthula dhyana is practiced on murti, Sukshma dhyana - on mantra Soham (सो ऽहम् - it’s meaning "I am He/That”)

In a sense, detachment from an object occurs during the process of awareness of the object, but it is not the same with non-perception of the object due to the probability of being stuck on something else. Being stuck is a limitation, therefore, it is "avidya" - ignorance.

(In dharana you realize stability in spiritual concentration. In dhyana you perceive all the world like one Divine power. In samadhi you can perceive the full balance, “samarasattva”(or samarasa).)

(The characteristic feature of Nath dhyana is that, unlike dhyana of Patanjali, it is based on the interaction with Shakti. The awakening of Kundalini is possible only in a good psychoenergetic state, which is not possible without asanas and pranayama.)

Кеvali kumbhaka helps to control senses and mind, which makes practice of dhyana perfect and helps in japa as well. The process of eating as inner homa (“prana agnihotra”) is also connected with the opening of the “fire of consciousness”. Functions of the mind are dependent on food, so it is important for the yogic practice of dhyana.

The fire of consciousness “consumes” objects of dhyana and everything consciousness interact with, and it can become a natural regular practice. Dhyana is a form of upasana, which can relate to dakshinachara, vamachara or yoga traditions. Dakshinachara upasana is karma-kanda, which purifies our mind. Vamachara upasana is the process when our mind (Shiva as consciousness) absorbs elements of puja and all mundane elements, even negative.

The types of dhyana

Three types of dhyana are described in Gheranda-samhita. The first one is sthula dhyana - meditation on the external physical object or on its image in chitta, our consciousness. Sthula dhyana is also an awareness of one's body.

The second type of dhyana is jyotir dhyana - ‘light’ meditation on the ukta- and mukta- triveni points, located in the area of kanda and kutashtha. During jyotir dhyana the light of Shakti and consciousness absorbs all physical aspects.

The third dhyana is the greatest one - sukshma (subtle) dhyana. It is a process when the subtle state of unity appears during the absorption of consciousness by light, and a yogin meditates on the tiniest point - “bindu". It is located in the area of ajna-chakra and symbolizes the emptiness (shunya), as a matter of fact, it is Shunya. On the highest level a yogin transfers bindu to Akasha above his head.

The texts of Gorakhnath and Gheranda-samhita tell us that the highest sukshma dhyana is a meditation on the space above the head. Three main dhyanas, in fact, deal with who we are, the three bodies: sthula, sukshma and karana-sharira. There are also lots of other dhyanas: vishvarupa-dhyana, nirakar-dhyana, svarupa-dhyana, vichara-dhyana.

All dhyanas in raja yoga: sthula, sukshma and jyotir are nothing other than concentration of our mind on a Deity in different manifestations, first of all, in the form of Guru. Because Guru is sushumna itself and no real awakening is possible without Guru. So all dhyana practices in yoga are connected with the direction of consciousness to different levels of perception of Guru and Devatas, they are just very vaguely described in texts. All yoga practices are spiritual, and dhyana is not just a meditation on unclear colorful points and dots, but the directing of our attention to Devatas and Guru, it is spiritual in its nature.

These two time periods are favorable for dhyana, retreats, for all types of inner practices, because all prana in a subtle body comes into balance. Nath yogic texts recommend to start purification of nadi with the practice of pranayama. The best time for dhyana are sandhyas (vishuvad) - at noon and in the evening around sunset.