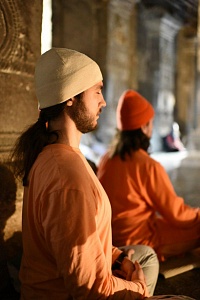 Mantra Yoga is a method for achieving the highest goal by using mantras. Practicing Mantra Yoga, sadhaka realizes mantra that he or she receives from Guru and the mantra`s siddhi.

Practicing upamsha you hear the sound, while practicing manasika you keep the mind empty despite of the high-level pronunciation of the mantra in mind. Therefor when you read manasika-mantra conscience absorbs mantra and otherwise, mantra absorbs conscience. It is believed that upamsha is three times stronger than vachaka and manasika is three times stronger than upamsha. During manasika-mantra practice, one can neglect many of the external conditions that distract mind. Taking the fact that Yogis use not only mantras but also pranayama and other Yogi techniques, they (Yogis) have less external rules than Tantriques. This is why in shabar-mantras everything is much simpler.

According to “Mantra Yoga Samhita”, Mantra Yoga is divided into 16 angas (parts):

1) Bhakti is divided into two levels. First - gauni-bhakti (preparatory) that includes next aspects of sadhana:

Each tradition can have its own levels of bhakti and their interpretation and even within one tradition there can be different branches with their specifics. I gave you several options as an example that you can find in different books about Bhakti Yoga written in Hindi in India. There are many directions of Bhakti Yoga. Usually it can be correctly transmitted only from Guru to the student.

2) Shuddhi (purification) is the next anga in Mantra Yoga. This is how “Mantra Yoga Samhita” describes shuddhi:

“33. On the basis of differentiation of kaya (body), Mana (mind), Dik (Quarters), and Sthana (place), Suddhi is of four kinds. These are called in the order – Sthana-suddhi, Dikshuddhi, Bahya (External, of Kaya)-shuddhi and Antah (Mana)-shuddhi. The Sthana-shuddhi increases piousness and virtuousness. From Dik-shuddhi one obtains Shakti (power). From Bahya or Kaya-shuddhi one gets self-rejoicing and the kindness of Ista-Davata (Worshiped Deity). And from Antah-shuddhi one obtains the vision of his Ishtadevata and Samadhi. A Yogi should always observe all these four Shuddhis.”

3) Asana – important part of Mantra Yoga. There are three types of Asanas. The first – those that on which one sits, the second – yoga-asanas (positions of body) and the third one – asanas as a general psychic state. For example, according to «Siddha-siddhanta-paddhati», asana is the state of being in the true form (svarupa).

“39. Seats of a good piece of silken cloth, blanket, sheet made of Kusha grass, lion skin, tiger-skin, and deer-skin are considered extremely pure and only these are accomplishers of the desired aims. Blanket is good for acts done from interested motives, but here the seat made of red blanket is considered best. Seat of a black. deer-skin gives accomplishment of knowledge; Tiger-skin gives emancipation; Kusha seat gives longevity, and seat of silken cloth is destroyer of diseases. A seat prepared. by placing in sequence, ﬁrst, the Kusah-asana, then deer-skin over it, and then on the top a silken cloth, gives success in Yoga Sadhana.

Now, painful or prohibited Asanas (seats) are being described: By using earth as a seat one gets pain; by using wooden seat there is the beginning of misfortune; by using a seat made of bamboo there is poverty; by using stone seat there is suffering from disease; by using a straw seat there is loss of fame; by using a seat of leaves there is insanity, and by using a seat made of cloth there is loss of Japa, Dhyana and Tapa. Therefore, seats of these materials are prohibited. A householder, without initiation from a Guru, should never sit on seats of lion-skin, tiger-skin and black deer—skin. A householder can sit on such seats only with the permission of a Guru. But a chaste student can sit on such seats like an indifferent person. Sitting on a proper seat reciting the name of the Rishi of Prithvi—mantra — that is after reciting the meter etc. in order of Meru—prishtha, etc, and purifying the seat with “Asane-viniyogah”, when one comfortably performs Puja, then he can accomplish his desired aims. Doing otherwise the performance of Sadhana becomes fruitless.”

4) Panchanga-sevana – five types of serving the Deity. Those five are named as Panchanga and include: recitation of the devoted texts such as Gita (each Deity has its own Gita), sahasranama (thousands of names of Deity with praise of its different forms), stava (praising), kavacha (mantric text that can be defined as protective prayer), Gita and Hridya (essence of knowledge).

5) Achara is a form of worship of the Deity in the form of dakshinachara, vamachara and divyachara. Different traditions and Gurus provide different explanations of these acharas. For example, in what way acharas are related to three gunas, bhavas (characteristics of sadhaka) etc.

8) Pranakriya where belong pranayamas (those that Guru should teach), prana pratishtha (infusion of the energy into murti or yantra) and nyasa (parts of the body which are being touched with hand; those can be external and internal nyasas). External nyasas are described in details in many paddhatis. Internal nyasa can be combined with pranayama in the form of nadi shoddhana (during the inhalation, breath holding and exhalation one reads different syllables from Sanskrit – Matrika).

9) Mudras are specific gestures used during pujas and yoga practices. In Mantra Yoga used to be done with hands. Each gesture is devoted to some Deity. Mudra is something that makes Deity happy. “Mantra Yoga Samhita” provides following description:

“53. Pleasure of the Deities is increased through the Mudras and Mudras also destroy the sins of the Sadhaka. This is the reason sages adept in Tantras have named them as Mudra. The God of Gods, Mahadeva, says that he will now describe the Mudas which have been incorporated in all the Tantras and the practice of which at the time of worshipping a Deity pleases the Deity of the Mantra. In worship, in Japa, in Concentrations, in Kamya Karma (rites done to effect particular objects), at the time of bathing, at the time of invocation, in the consecration of Shankha, in the life-giving (Prana-pratishtha) of an Idol, in protection, in offering to a Deity and in various rites mentioned in the Kalpas, the Mudras be properly performed in accordance with the qualities of the respective rites. The nine kinds of Invocational etc., Mudras are supposed to be general in nature. The Shadanga Mudras are also useful for all purposes. The pandits have speciﬁed nineteen Mudras for the worship of Vishnu.

● For the worship of Surya only one, Padma mudra, has been prescribed.

● Danta, Pasha, Ankusha, Vighna, Parshu, Ladduka, and Bijapura are the seven Mudras prescribed for the worship of Ganesha.

● Matsya, Kurma, Leliha, Munda, and Mahayoni are the Mudras which bestow all kinds of wealth and properties. The Mahayoni Mudra is used for the worship of Shakti Goddess;

● Munda Mudra is used for the worship of Syama etc., and Matsya, Kurma, and Leliha Mudras are used for general worship.

● Yoni, Bhutini, Bija, Daityadhumini and Lelihana are me ﬁve Mudras specially specified for the worship of Goddess Tara.

According to their rights and qualiﬁcation the Sadhakas of all the ﬁve traditions should learn the respective Mudras from their Gurus. The detailed characteristics of all the Mudras are given in the Tantras. There are various Mudras which please the Deities and the descriptions obtainable from different worshipping procedures. Here only names, and only a few Mudras have been described in accordance with the worship of Five Deities. Just as the names of such Mudras have been enumerated which please the various Devas and Devis, so are being described the various Mudras which please the Rishis. Jnanamudra, Bhaktimudra, Tapomudra, Karmamudra, and Danamudra are such which please the sages (Rishis). Vara Mudra and Abhaya Mudra are those with which the Rishis, Deities, Pittris and the inhabitants of the three worlds are pleased.”

10) Tarpana is an incremental part of purashcharana. Tarpanas are dedicated to the Deities, Rishis and Pittris (ancestors). 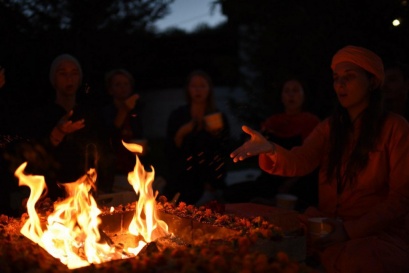 11) Havan is a ritual of worship of Deity made into fire, very important element of purashcharana. There are many rules how to conduct homa in each tradition; there are simplified versions and more complex. Some can take for several days. Homa is an ancient ritual that was widely spread in during the Vedic period. Analogues of Indian homa are present in other religions.

12) Bali is an offering of physical sacrifice to the Deity as for example some naivedya (food) etc.

13) Yaga offering (sacrifice) that can internal (mentally) or external. This includes offerings of upacharas in puja.

15) Dhyana is consistent focusing of the mind over the form of your Deity. In Mantra Yoga, dhyana can be in the form of text devoted to Deity.

16) Samadhi is the attainment of entrancement (mahanubhava), during the practice of mantra.

This is how Samadhi is explained in “Mantra Yoga Samhita”:

“81. Just as Samadhi of Laya-yoga is called Mahalaya and the Samadhi of Hatha-yoga called Mahabodha, so the Samadhi of Mantra-yoga is called Mahabhava. So long as there is existence of Triputi there remains a competence for Dhyana. The Mahabhava arises when there is an absorption of Triputi. Along with the attainment of Mantra-siddhi (ability to make a Mantra efficacious) when there is absorption of mind into the Deity and the Triputi is destroyed then a Yogi attains Samadhi. In the beginning, there are individual and independent cognitions of the mind, Mantra, and the Deity, but when all these three cognitions are mutually absorbed there is also an absorption of the Triputi - that is of the Dhyata (one who is performing Dhyana), Dhyana and the Dhyeya (object of Dhyana). It is in this state that the symptoms of tears of joy and thrill of the hair (romancha) develop. Gradually there is absorption of the mind and the state of Samadhi arises. Through the attainment of Samadhi Sadhaka becomes fulﬁlled in his objectives. This is the attainment of Mahabhava, the supreme objective of Mantra Yoga.”