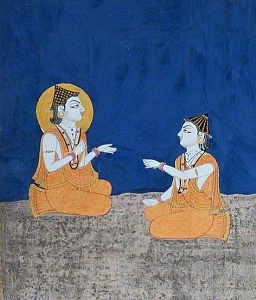 I permit to myself some personal thoughts on the most important, in my opinion, relations, without which any spiritual practice is impossible. There is one general opinion – if you have Guru, you have nothing to worry about. Yes, that is true. But that is true only in case disciple is devoted to his Guru to such extent that he is absolutely convinced he will reach the desired aim with the help of Guru. Such kind of disciple fulfills all Guru’s instructions resignedly. Moreover, he is able to listen to Guru correctly, without selecting and rejecting something he does not like in Master’s words.

Guru's speech is mantra, it is the divine sound. It is OM itself. That is why everything Master says is the Truth, and where the Truth is – there is no place for doubts. Such disciple, who perceives all Guru’s words, even if they are absolutely contrary to the social standards brought up in him, even if those words seem useless or unwise, such disciple, who sees the manifestation of Absolut in everything Guru says or does – can be considered as disciple, indeed.

There are many who aspire to choose incorporeal Masters. They can be some saints who lived long ago in the past or have left this world recently, or other manifested forms of Absolut. People do not wish to live at present moment, near to Guru, to serve him and fulfill his teachings. This is the effect of being afraid of changing oneself, as a rule. Indeed, if such a super mundane “Guru” cannot control your deeds (usually such control means transformation of disciple’s ego, and in most cases the process is not without pain), then you are free to do what is right in your own opinion. But such a way is not always beneficial. This is known to everybody – it is impossible to become Buddha following his way, everyone has own way of development and only Guru is able to correct disciple properly on this way, in order not only routine social problems have less impact on sadhana, but also own “I”, disciple’s ego, would be transformed to merge with the Supreme Self.

There is one more very significant thing to understand: Guru’s attitude to disciple is a reflection of disciple’s attitude to Guru. If disciple serves Guru, then Guru serves his disciple. If disciple commits evil towards his Master, then such deeds affect himself in a greater degree. If disciple is indifferent to Guru’s affairs, then Guru also will not be able to do anything for such a person, even despite the fact he truly wishes only the very best to all his disciples. Guru is only the dharma conductor. So if a disciple does not wish to accept it, then how can Master do it by force?

Every being in this world has the right to obtain a chance for liberation. Guru accepts everyone, even the last one of asuras. Then the choice of disciple follows – if one is interested in progress, wishes to change oneself, perceives the Absolut Truth in Masters, then one reaches the desired goal. But if one follows inferior desires, own ego and fears, then he continues whirling in samsara. As a matter of fact, Master is ready to help everyone, and in fact he helps everybody, anyway.

There is the opinion “when disciple is ready, Master appears”. That is the true view, but it needs to be understood properly. A person can spend years near to the authentic Guru, but does not become a disciple. On the other hand, Master neither goes anywhere nor comes from elsewhere. The consciousness of disciple changes, and when one realizes that only Master can help, that nothing is more important than Guru anymore, then one becomes able to see that the true Master is near, or to do one’s best to reach him. Discipleship begins when disciple is prepared to perceive what Guru teaches.

In fact, shaktipat occurs permanently, every moment; the only question is whether we are able to receive it.