Meaning of the word Adesh 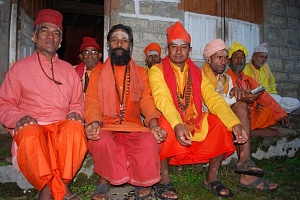 “Adesh” is a common greeting among Nathas.

In “Siddha-siddhanta-paddhati” Gorakshanath says that “Adesh” means unity between Atma, Jivatma and Paramatma. People in their usual state of mind don`t realize this unity, because of this all the problems appear. Paramatma is Supreme Soul or Spirit that exists in all living creatures and is beyond any limitations. Atma is an eternal individual soul that is transcendental by its nature and beyond the limits of forms. Jivatma is an eternal soul incarnated in the body. The level of awareness of Atman depends on interconnection with Paramatma Jivatma, in first place, means awareness of the body that is identical to the universe (Brahmanda). Nathas consider outer world as the state of one`s spiritual energy. Kaya-sadhana and yoga help to realize this identity. However, given perception of the world, soul and Supreme Soul comes not at once but in the process of yoga practice. Adesh is a focus on this, was following the path of mystical vision when all illusionary limits disappear.

By saying “Adesh”, we mean this state (of mind). Adesh is the will of Shiva to realize self as the revealed Universe and great consciousness incarnated in different beings. We also have this will to turn self to the origin that we have always been, that we are and that we will always be. Let`s not misinterpret “Adesh” with the desire for power or egoistic commandment. Adesh is a perception of the above will in the state of full openness to anugraha-shakti that enlightens all our being, ability to learn, evolve and follow the Nathas way.

Using the greeting “Adesh” we remind each other that we are Nath Yogis. “Adesh” is particularly used to greet Guru or someone who has achieved higher yoga realization than yourself.

Materials are taken from dharmanathi.ru