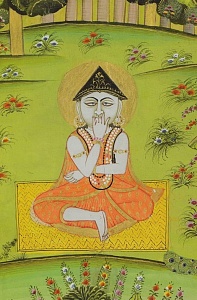 Prana is usually associated with consciousness, and with his work. Also prana is associated with breathing, but prana means "vital energy", and it especially manifests itself in breathing, because breathing is important function in our organism. But all other processes in the body such as metabolism, digestion, temperature, operation of the nervous system, reproductive, circulatory, muscular and other depend on prana. If you slow down some functions, the prana spent on their activity is preserved and resource of prana becomes bigger. For example, during a fast, during sexual abstinence, when you are silent for a long time (the talk takes energy), when you hold your breath, you save prana.

As you can see, the control of prana may not necessarily is connected with breathing, but control through the breath is one of the most effective methods. Yogis invented many ways: for example, vairagya (desistance, braking desires, passions, lust) is also sometimes affects no less than pranayama as we usually understand it, as the form of breath control. Uncontrolled passions also consume prana and if you slow down them, you increase the level of prana, it turns prana (life force) ayama (increase).

Pranayama means “prana” (life force) and ayama (extension, stretching, increasing). It is the practice, that expands the standard features of the vital energy and consciousness (because it depends on prana). Fluctuations in consciousness (vritti) and vibrations of prana (prana-nirodha) should disappear. The higher realization of pranayama you achieved, the more peaceful mind you have, including emotions, which depend on mind.

Translation of names of the simple pranayama elements is very important. Kumbhaka means something like a pitcher, Puraka means filling, fulness, Rechaka is expulsion, ousting, extraction. Also, the body itself is called a pitcher. Birth begins with the inhalation, and death – with the exhalation. What is the filling? It happens when all parts of the body are evenly filled with prana. It is possible only when the body is free from the muscle tension. The practice of asanas in this case is an exception because it contains other processes. Exhale is a return to the state which was before filling. Rough, sharp exhalation is like a sudden death or momentary falling asleep. There are the points of maximum emptying – “shunya” and maximum fullness –“purnam” between inhalation and exhalation.

Breathing is a continuous cycle, that’s why it’s called "ajapa-japa". All things continuously circle, the processes of creation and destruction are also ajapa-japa, therefore this is the practice of staying in harmony. Exhale and inhale are the circle or cycle, they become smoother if you practice regular, smoothness is also associated with the level of cleanliness of the nadis. If breathing and the flow of vibration easily spread in our energy system, that's means that we have a lot of life force, and we see more and more opportunities, interconnections outside. It happens against the background of the deep relaxation and inner silence.