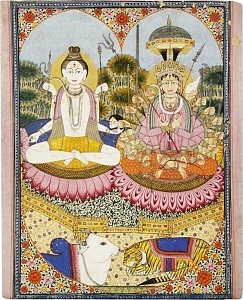 Natha Sampradaya refers to the Shivaism, but this tradition also worships Shakti - the Goddess.

Shakti is a power that allows Shiva to manifest as a form. We know many forms of Shiva - Rudra, Bhairava, Aghora, Sadyojata, Tatpurusha, Sadashiva. Generally, Shiva is the original emptiness, he is beyond all gunas (nirguna), beyond all qualities. He is the super-consciousness (parasamvit), is the omnipresent consciousness, and Shakti is the energy by which this consciousness is revealed.

But there are different forms of energy and different forms of consciousness. Accordingly, we can’t uniquely assume that Shakti is only one energy. Shiva and Shakti are originally inseparable, that is why Nathas say that Shiva has the main Shakti, Nija-Shakti. Nija means "one's own", it is an energy that is connected with Shiva at all stages of self-manifestation, self-disclosure, and it is always aimed at be with Shiva. Even if it seems to us, conditioned beings, that Shakti is relative, determines us and has nothing to do with spirituality, still it remains connected with Siva. And since it is directed towards the realization of connection with Shiva, it can be targeted for us (personally for us) in such a way as to realize ourselves as Shiva, our God-identity, God-likeness. This principle is very important.

Shakti is a transformation, a change, a time that runs and constantly changes. And Shiva is space, stability, eternity. Space does not change, and time, as one of the great ones said: "Time is the material of which life consists"; so it is. What we see around us is matter, but in fact it is vibrations at the level of atoms, molecules, micro-particles that are constantly exchanging, and all these different-vibrational movements produce matter, all this matter is energy, Shakti.

And since we are stuck in certain definite vibrations, it seems to us that all matter is dense. But this density is relative, it is relative to something. And when through interaction with a more powerful kind of spiritual energy, we expand our consciousness and, through Shakti, return it to the identity with the consciousness of Shiva - we start to understand that the entire energy density is relative. That is for us all the limitations in relative space and relative time begin to disappear. And Shakti plays a very important role here.

But we have not just concentrate on "some energy", because we usually concentrate on what we idealize, what we are genuinely interested in. And what can be more idealized than the Divine? Therefore, we perceive Shakti as the Divine and through this idealization we are able to penetrate into the reality of this Divine Shakti. Our consciousness is purified from the blocks by the dynamic Shakti and expands. And then Shakti can abstract from its relativity, from littering with things of secondary importance.

When our consciousness is littered, it is affected by that Shakti, which is called Maya. Maya - from the word "meya", means "dimensionality", "measurable", conditioned by relative space. On one hand, it is a form and it can play the function of expansion if we do not cling to it and if we interact wisely with this energy. On the other hand, we can catch on form, take this idea into our mind, and live in it such a catch - that's called cluttering.

This is why Shakti is bilateral - on one hand, it is the source of enlightenment of our consciousness, on the other hand, a source of conditioning.

Shakti is the Mother Goddess, who created the universe that conditions us, the entire society is a manifestation of Maya. The society may be sinful, but it all depends on how we interact with it. Mainly this Shakti can`t be either negative or positive. But we need the concept of sin, because when we consider ourselves sinless, we can fall into the charm and think of ourselves as of already realized yogis identified with Shiva (Shivoham). But in fact - this is a form of narcissism, therefore, to some extent, the concept of sin is necessary for a person to spur on, so that he does not get stuck in his achievements. We must remember that there are sins and imperfections of this world, but we must understand that conceptually there is no sin, everything is God, everything is in God. Even such powers as asuras, demonic prets, pishachas are part of Shakti, they are also created by the Mother Goddess. Sometimes She can even take their forms to fight the very same demons (Mahadevi, Mahasuri - this can be read in Devi-Mahatmya), and this, of course, must be taken very consciously.

That's how we see Shakti, without Her there can`t be any techniques and upayas. But we need Shakti in all its fullness, so that all objects of this world that are in contact with us are directed to their development. If we think that Shakti is present only in pranayamas and mantras - it will somehow work, but this is the initial stage. At a higher stage, we understand that Shakti manifests Herself through everything - through all events, through our sensory states, through thought processes, through life processes in our body.

We do not isolate practice from life by means of Shakti. Shiva, as a form of masculinity, is more straightforward, stable, specific and in the perspective of this material world given stability can turn into a form of dullness, so that we need feminine qualities to be more flexible. And the Mother Goddess helps Shiva, as child, to adapt. And what often happens with some people who think that they are exclusive, that they have the form of jnana (a well-read person), and that everything else for him is soulless? This unspiritual begins to destroy him in a very powerfully manner.

That is why we depict Shakti in formidable forms - Kali, Durga. But in fact, it is neither bad nor good. It is simple: if you want to develop, Shakti will be good for you, if you don’t – then She will be not good for you. This is why Shaktism, the direction where the Mother Goddess, nature and its manifestations are worshiped, is a very important Tradition. And inside of our Tradition, too, is the concept of Shakti, but we honor it when we understand why it is needed - in order to achieve unity with Shiva. Ultimately, we understand that Shiva and Shakti are one, Energy and Consciousness are inseparable, there is no difference between Emptiness and Fullness, we abstract from any form of isolation and bondage. Shakti plays an important role in this.