In this article I would like to introduce you to the concept of vāmāchāra in Indian Tantra. In Hinduism vāmāchāra is considered to be a closed form of worship. It is closed for many reasons, three of them, the most significant, are listed below:

Vāmāchāra uses “impure” (as considered by the orthodox Hindu religion) elements as offerings to deities. These elements are alcohol, meat, fish and practice of sacred sex. It can cause the feeling of blame (guilt) and misunderstanding of the majority of Hindus who have rigid criteria of what is pure and what is impure.

A closed system of practice, that is closed, should not be transmitted to those individuals whom Guru considers as morally unscrupulous, able to use these practices to harm themselves and others. Vāma-Mārga practices should not be disclosed to those individuals who have no proper dikshā and blessings from their Guru, it is a secret associated with dikshā.

Actually the practices of vāmāchāra exist in any tantric system, you can find their analogues even in Christianity, which uses the communion by bread and wine in the church, in Gnostic cult, Kabbalah and Sufism, in Chinese tradition (there these practices are predominantly associated with the control of energy), and in Buddhism vāmāchāra methods are known as the practice of karma-mudrā.

The practices like vajrolī mudrā, sahajolī mudrā, amarolī-mudrā, and also the worship of the Goddess with the using of “impure” elements can be found in Nathism. All these methods have their differences, and some features specifically related to certain religious and mystical aspects. However, we must be aware of the fact that in all these practices, practitioners do not use drinking alcohol or having sex just for fun, otherwise all copulating beings and alcoholics would have become great yogis. In Tantrism all of these methods have a purpose to make sacred the “impure” elements in which the exoteric religion sees sin rather than divine; sādhakavāmāchārin is able to feel the fullness of spiritual non-dual experience through such practices.

Traditionally, according to many tantric scriptures, sādhakas are divided into several bhāvas (the characters):

Pashu-bhāva (animal) is characterized by a very limited consciousness due to false morality. Such practitioners are suitable for different forms of penance, intensive practices of mantras (purashcharana), pūjā with “pure” offerings, etc.

Vīra-bhāva (heroic) this category of practitioners who have a sophisticated understanding of yoga, different forms of worship, being able to become aware of themselves and the world, seeing the divine in themselves and in different objects of the world. These people are able to follow a non-formal and the essential approach, right with wide perspective.

Divya-bhāva (divine) practitioners are independent from any external rituals which are performed by Vīrabhava practitioners, for example, from the practice of maithuna or some exotic rituals. However, divya-bhāva practitioners may participate in them as well. They are able to realize God in everything and everything for them is the means of interaction with the Divine.

I should say that the division into bhāvas is more typical for the Shaktic ways, Kashmir Shaivism has three methods (upāyas) which do not match with three bhāvas. However, in the later works of Kashmiri gurus we find the mention of only two bhāvas: Pashu and Vīra. It is believed that for sādhakas of pashubhāva is better to focus on dakshināchāra practice where the sādhaka offers worship to the Goddess, calling Her into the mūrti, the yantra, the sacred fire of agnihotra etc. Vīra-bhāva-sādhakas perform the ritual of worshipping of real women rather than the mūrti and the yantra. They consider a woman as a Goddess. Whereas Divya-bhāva-sādhakas may use different methods, of both external and internal contemplation.

In Tantrism, it can often be seen that a practitioner makes himself like the Deity through the nyāsas (for example, through the six-part nyāsa) and then meditate on the Divine within his own microcosm. Similarly the practictioner can do, for example, shad-anga nyāsa into the center of the yantra located on the altar, considering that the yantra is the abode of the Goddess. Or, it is like in vāmāchāra ritual, the sādhaka does nyāsas for his woman-shakti and performs the pūjā worshipping her. In fact, whether there is a pūjā to yantra or to real woman, the essence of the ritual is the worship to Goddess. When the sādhaka directs the bhakti to the Goddess through woman, he can receive the shakti power from her.

Traditionally, women in India belong to different varnas, and each varna requires specific details in the ritual practice. Woman-representative of a particular varna may empower a sādhaka. For example, if a woman belongs to the Brahmin varna, the practice with her can bestow the spiritual knowledge to a sādhaka, if she is a woman of the Kshatriya varna, the sādhaka is bestowed the power of control, if she is from the Vaishya varna, so the sādhaka becomes successful in commerce, and finally, if the woman is from the Shudra varna, it helps with everything that is illegal or even criminal. The major part of the vāmāchāra texts recommend to perform the practice with the women of the lower strata of Indian society.

If the sādhaka is able to transform the negative energy into the spiritual, it is straight path to the liberation from the wheel of samsāra. The Vāmāchārin may interact with such “impure elements” present in the maithuna with own wife (svakīya-shakti), with the wife of another man (parakīya-shakti), or with a courtesan (veshya). 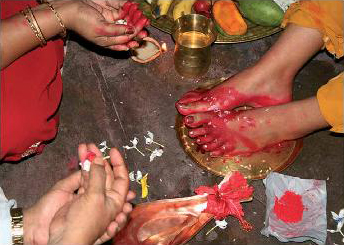 In fact, any deity can be worshiped in the vāmāchāra rituals, but more often Vāma-mārga in Tantra is associated with female Devatās, preferring wrathful forms (ugra-rūpa) such as Kālī, Bagalamukhi, Varahī etc. However, my Guru said that most sādhakas should perform the pañchamakāra ritual only when it is auspicious (appropriate) period. Often, these periods may be associated with the full moon, new moon, or the eighth day of bright and dark moon. However, there are some Kaula-tantrics or aghorīs who practice the vāmāchāra ritual every day, they worship a particular form of Durgā, known as Tiraskaranī. Tiraskaranī Durgā protects the practices of Vāma-mārga.

In the rituals may be two participants: sādhaka (Shaktiman) and sādhikā (Shakti) or more participants, and during the pūjā the Goddess blurs out the boundaries between all of them, so that everyone feels the state of unity through the mystical power of Shakti. Furthermore, in the rituals are used different vessels with wine (yoginī-pātra, Bhairava-pātra, guru-pātra, etc.). At the end of the pūjā this vessel is filled up with some components associated with prasād. Finally, the participants have a drink of this wine going beyond all limitations associated with social varnas. According to Kaula Tantrism, it is a direct way to achieve mukti.

My Guru R.Ch. Sharma said that if you cannot perform such complicated rituals with others participants, you can take the flower petals and mix them with rice and red powder (sindur) and put the mixture on a yantra. This is a symbolic offering of blood and semen. You can also take into account by what name the Divine will be called in the pūjā, if the Divine is Bagalamukhi you can use yellow colour flowers because Bagalamukhi has yellow apparel, if Tripurasundari – red flowers, if Kālī – blue flowers, etc.

What is panchamākara? These are five forms of pleasure, such as madya (wine used in the pūjā), mudrā (roasted grain, money, sometimes woman – strī), māmsa (meat), matsya (fish) and maithuna (intercourse). However, some tantras and yogic shāstras treat them as internal yogic processes, where eating of fish symbolizes the absorption of both currents (idā and pingalā) by sushumnā, eating of meat is "eating of tongue” or khecharī-mudrā, wine symbolizes the Amrita outgoing from the sahasrāra chakra, mudrā is yogic gestures, and maithuna symbolizes the union of Kundalinī and Shiva in the sahasrāra chakra.

Three of the five M’s (madya, māmsa and maithuna) are interpreted by some sources as the most important ones. Of the three, maithuna is considered as the main practice because it includes 3 M’s or all 5 M’s. Madya (wine) is strī (shakti) or soma (sa-Uma) and māmsa (meat) is Shiva. The mix of meat and wine promotes a sexual desire, which leads to maithuna.

In the Nātha tradition there is the following approach on the pañchamakāra practice: each element has its own three levels of practice.

First, the physical (pratyaksha) this is the level known as tāmasika, followed by the anukalpa level where one uses the replacement (anukalpa or pratinidhi) and the highest is the divine level (divya). The yogi must strive for the Divya level. So, it may look as follows:

According to the Nātha tradition, the yogin has to direct his consciousness more and more from the sthūla sphere (material) to the sūkshma (subtle). The yogin’s aim is to sublimate his own gross instincts into the subtle spiritual experience, the physical performance of 5M is considered as the lowest level in practice. The practice of 5M’s itself, performed as a ritual, is considered favorable only if the sādhaka has received it from a real Guru.