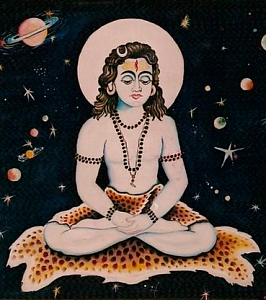 Let there be will of the Supreme Being, let there be will of Guru. Oh, Guruji! Who is he? He, who is free from any signs, he, who is clear and shining? (clarify this to me). Shiva is in the form of Omkara, manifested in the form of a saint inside the Hamsa form. Hamsa and Paramahamsa are in the form of two syllables. Guru is definitely Gorakshanath, the body is Gayatri. I worship to Brahma, to the power of Soham, to Mother Void, to the manifested father, to the fearless path, to a permanent state, to a purest family clan, whose life mission is like a flight, who is in countless Rishis, countless branches, which are going from the essence of Vedas, who knows Atman and Brahman. The one who knows the Entity, who knows Atman. Om GOM, let us perceive Gorakshanath, the son of the void. While meditating on him, let us be inspired by spotless Goraksha! Glory to Natha and Guruji, Adesh! Adesh!

Let’s take a closer look at the meaning of the mantra. At the beginning it says about supreme being, element सत् – sat, which is also partly connected with a root अस् as – to be, from which a famous term सत्त्व sattvá (essence, existence) comes from. The same way सत्य satya – “truth" comes from सत्, this term is correlated with the order of the Universe ऋतं ṛtaṃ in Vedas. Directing your life aspirations according to supreme laws of creation and their truth leads to samarasattva (utter harmony). Further it says गुरूजी को आदेश – gurūjī ko ādeś – “Let the Guru’s will prevail”, in that case it will be a subjective postposition, which could be translated as ‘Guru’s will’ or ‘Guru’s order’, ‘instruction’, i.e. Guru is considered as a manifestation of Absolute and following Guru is following Shiva and life according to Dharma. A further question is अलख निरंजन कौन स्वरूपी बोलिए ? – alakh niraṇjan kaun svarūpī bolie - ‘say, who is स्वरूप" svarūpa - an embodiment, likeness अलख , अ - a denial of ‘not’ लख (from sanskrit लक्ष) - ‘symbol, goal’ and निरंजन (spotless)? i.e. ‘Say, what is an embodiment of someone who is beyond symbolism and spotless?’ Further it says अलख निरंजन ज्योति स्वरूपी – alakh niraṇjan jyoti svarūpī bolie “Who is pure, beyond symbolism, whose nature is the radiance”. Further Shiva is mentioned in the form of Omkara. Omkara consists of five elements, from matra “A’ goes ‘U’ and further goes Makara, from Makara comes nada (a sound flow and energy) and from nada comes bindu (peak of concentration of the energy), thus there are 5 elements in total. From these five elements panchakshari-mantra originates ॐ = नमः शिवाय, and five forms of Shiva appear from every syllable of panchakshari-mantra: Tatpurusha, Aghora, Sadyojata, Vamadeva and Ishana. These are Vedic forms of Shiva. Further it says that Shiva appeared in the form of a saint or holy man साधरुपी (from sanskrit साधु sadhu - ‘proper’, ‘accomplished’ - it’s the title of ascetic or yogin in Indian society). साधरुपी means Shiva in the form of an ascetic yogin, i.e. Gorakshanath.

Further it says that मध्याने हंस रुपी inside हंस or सोहं ‘omkara’ is located, if we remove syllables ह and स, Shabdabrahman will remain inside them, manifested as pranava OM. That is one mantra हंस or सोहं, which has its own meanings and despite of apparent simplicity its full meaning is considered as secret. Its thorough application is clearly explained in a number of Shri-Vidya texts, but it could be received only from Guru. It’s said that in the form of हंस this mantra moves from muladhara-chakra to sahasrara-chakra and in sahasrara-chakra it transforms into सोहं – sohaṁ – “I am He”. हंस haṁsa also means ‘swan’, and a swan is a bird with its own features. A swan has an ability to reside in two environments, such as water and sky, it can fly in the sky and dive underwater, i.e. in sansara (in this world) and above it. After diving underwater it easily comes out of water, shaking off the remains of it. The swan is a symbol of avadhuta or jivanmukta, a person who sometimes appears in sansara, but isn’t affected by it. परमहंस Paramahamsa is jivanmukta (yogin who lives in the world but stays enlightened).

Further, हंस or सोहं has दो अक्षर two letters, the term क्षर means something which is prone to decay, destructible, the term अक्षर means something which is not prone to decay or in other words immortal. Aksharas are often correlated with Goddesses, known as Nityas (the ones who are eternal) in tantras. Here, in a contrary, consonants ‘vyandjana’ contain both Shiva and Shakti elements. Gorakshanath is the Universe (Vishva) and at the same time he is a reality which is beyond the Universe (Vishvatita). This prohibitive reality controls the Universal order. He is काया - ‘body’, which represents macrocosm. Also ब्रह्मा, known as Prajapati, an ancestor of the Universe is mentioned here, in connection with the mantra Soham. According to some legends, the Goddess Gayatri is one of his wives.

She is also known as The Mother of Vedas, from which vedic amnayas came. They also connected to Tantric amnayas (Traditions). Every Veda is connected with the particular side of the world and the fifth is their essence. Further we see an interesting description of the reality: शून्य माता The Goddess in the form of everlasting emptiness. It is considered that Gorakshanath शून्य पुत्र was born from the void. The term अविगत पिता means ‘a father’, and अविगत can have slightly different nuance of meaning. In Sanskrit it is ‘someone who doesn’t have any obstacles’. In Hindi it often means ‘someone who would not go away’, ‘someone who doesn’t exist’, in one word ‘someone who is immortal in this world’. Further अभय पंथ means worship of the fearless path and अचल पदवी : अ ("not") + चल (‘changeable’) = non-changeable पदवी state. And further there are enumerations, which have a core relation to the Vedic tradition, but they took their own yogic forms in Natha-Sampradaya. It is considered that someone who lives according to Vedas has a particular family गोत्र, ascended to a specific Rishi. Every line is connected with जाति - professional knowledge transferred as a heritage. Portuguese called it caste.

So वर्ण is connected with a color of a janeu. Brahmans have white, Kshatriyas have red, Vaishyas have yellow and it is mostly connected with sadhana in the form of upasana. And जाति are castes which are adjoined to varnas from the root जन् ‘birth’, i.e. skills which are transferred from father to son and are mostly connected with social activities. For instance, it could be related with a dharmic duty of a person and it has a great importance in karma-yoga practices. Further in mantra प्रवर is mentioned. Every ancestral line has a few secondary Rishis, which are worshipped too. Further a term शाखा. They put an accent on a particular samhita (vedic text) in every ancestral line. It could be Rig, Sama, Yajur and Atharva. Further, some particular texts such as brahman, aranyak and upanishad are related to one of the samhitas. Such a branch from a certain texts is called शाखा.

Now we know what the matter is, but these concepts have their own nuances among Nathas. The first, निरंजन गोत्र, is ‘pure’ ancestral line, which is not affected by suffering of sansara. The concept विहंगम जाति should be treated in detail. The development is described with a different level of intensity in different texts of yoga. पिपीलिका मा means an ant-like way, कपि मार्ग means a monkey-like way, विहंगम मार्ग means an bird-like way. So विहंगम जाति means someone who makes decisions quickly. Further, असंख्य प्रवर means an infinite number of wise men. अनन्त शाखा means that branches of the teaching are countless, limitless. सूक्ष्म वेद is sometimes used for the definition of Tantra and sometimes - yoga. Initially Vedas were transmitted by sages through the yoga practise and were passed on verbally. So, at the first place, Vedas were yogic experiences. And eventually they become written.

Initially Vedas were received directly आत्मज्ञानी ब्रह्मज्ञानी by someone who perceive their own I and a source of creation of the Universe Brahma. Mostly Atma and Brahma-jnana are studied in Upanishads, which are oriented on the inner essence of all rituals. Thereby Upanishads became one of ‘prasthana traya’, 3 elements of Vedanta (a completion, essence of Vedas), such as Upanishads, Bhagavad-Gita and Brahma-sutras. All these sources mainly have a common goal which is a realisation of Brahma and Atma-jnana. Further, there is a main mantra of Gorakshanath given in sanskrit which finalises the Shabar-mantra:

Om Gom, let us perceive Gorakshanath, son of the void, meditating on him, being inspired by spotless Goraksha! Glory to Natha and Guruji, Adesh! Adesh!