Sometimes it is called "bhrumadhya-chakra" (from Skt. "bhrumadhya" – between the eyebrows). 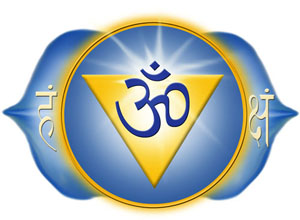 "It is located between the eyebrows and has a two-petal lotus. Its color is a shining ruby ​​color. There is the Yogi Adinatha Ji (Hamsa) and Jnyana-shakti (Sushumna) situated. Everyone who meditates on this chakra acquires knowledge of control abilities."

There are two petals – of the sun and moon in ajna-chakra that contain the letters haṁ and kṣaṁ. The whole matrix in the form of Sanskrit letters, which are in all the chakras, is in ajna. It also connects the three main canals of the nadi – ida on the left, pingala on the right and sushumna on the top. Therefore this chakra is also called Triveni or Trikuti (the place of the union of the three).

"The seventh is the chakra [between] the eyebrows. It is in the middle, the size of a thumb. This is the eye of knowledge. [There] one should contemplate the image of the tongue of flame. It brings perfection in speech."

This chakra is associated with the vak-siddhi (perfection in the practice of working with the force of sound). Under the image of flame of the thumb size, according to the Upanishads, one understands the Atman; when Kundalini ascends into the space of the skull (gagana-mandala), the yogi discovers Atman through the vak-shakti. In addition, many other practices of dharana and dhyana are associated with the area of ​​the eyebrow, for example, meditation on akasha (space), on the moon in the dark space of consciousness, on the luminous point of bindu and others. Concentration on the center between eyebrows includes mudras, such as shambhavi-mudra or maha-mudra.