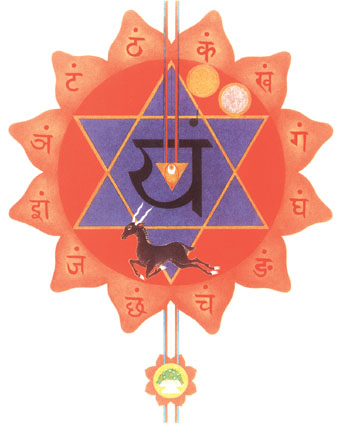 The word "Anahata" means non-precussive, undamaged, it indicates a sound that does not come from the contact of two objects, but in itself. This sound – anahata-nada – is born in Anahata-chakra and serves as a basis for many practices of laya-yoga, of which main is nadanusandhana.

Deep symbolism is associated with this chakra. Antelope is depicted in this chakra because antelope listens to every slightest rustle, just as the yogi listens to the sounds of anahata-nada. Shatkona (hexagonal star) is in anahata-chakra; shatkona itself is union of two triangles, the symbol of the connection of any dualities. This is how Anahata unites consciousness and energy, the upper and lower parts of the body. An air element is associated with the area of Anahata-chakra, therefore the bija-mantra yaṁ is often represented in the center of the chakra.

Anahata is pure, this is why any object of the universe can comprehend through this chakra. Atman is in anahata-chakra:

27. In the twelve-petalled chakra, free from good and sin, jiva wanders until reaches the truth.

This is why many teachers and texts advise meditating on Atman in the heart, and this place is considered as the most natural for performing dhyana.

In Nath tradition, Guru-yantra is the image of the anahata-chakra, because Guru rebuilds the disciple’s right interaction with the outside world, thus allowing him to reveal his true essence through the heart (anahata).