Hands are folded at the base of the abdomen with palms up: the back of the right hand on the left palm. 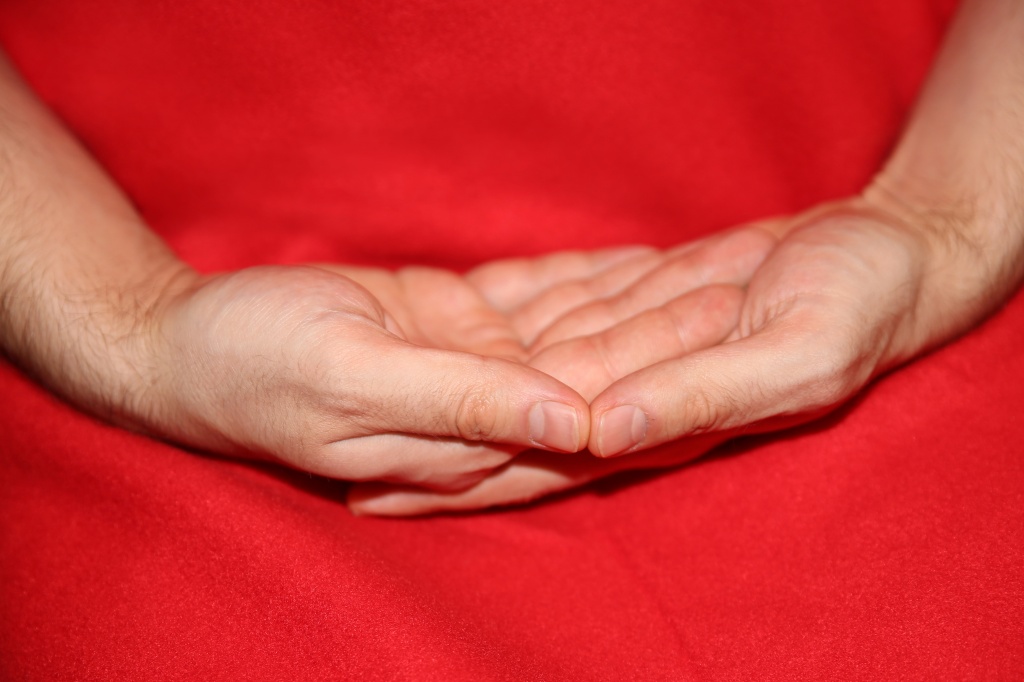 Usually Bhairava is associated with his Bhairavi, and often - in coition with her. Hence the position of the hands, repeating the embrace. 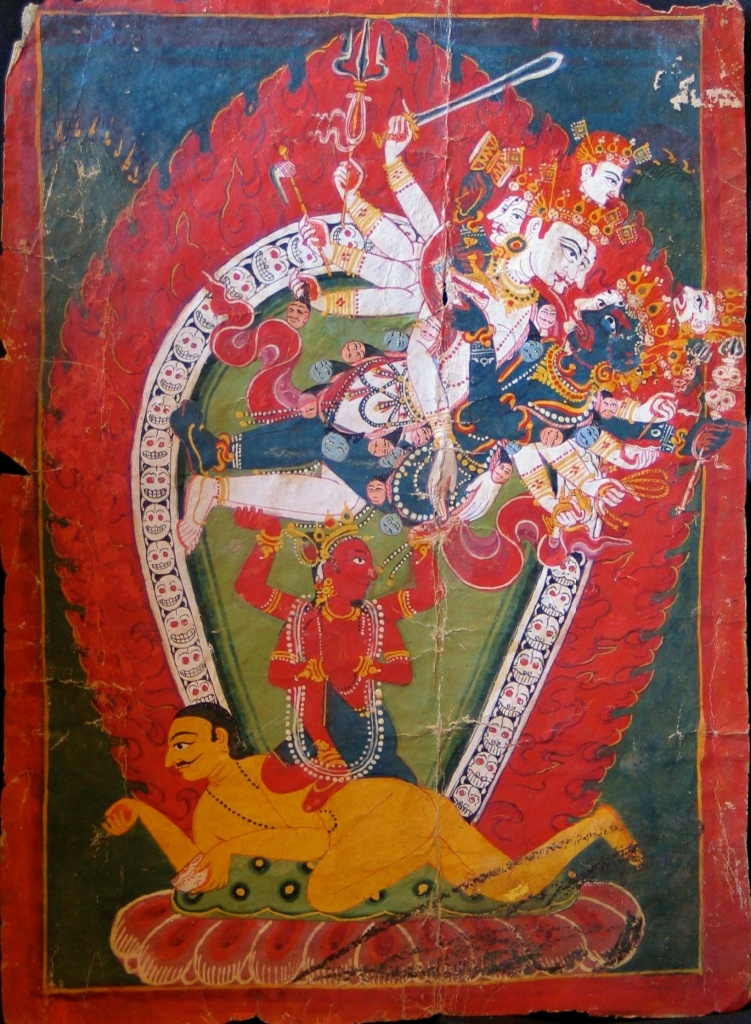 Like many other techniques, Bhairava-mudra could have come into hatha-yoga from tantra.

One variant of Bhairava-mudra is Bhairavi-mudra (the hands are changing places, the left hand rests upon the right) is good for siddhasana (different positions of the hands are desirable for different meditative asanas). The texts say that siddhasana helps in brahmacharya, directing prana into sushumna, and Bhairavi-mudra sublimates sexual energy, awakening it in a new state of ascending Kundalini. It is through Bhairavi that is possible to become urdhvareta. It is believed that if the bindu falls, then it goes back up through the "yoni-mudra" (sometimes called "shanmukhi"). It should be understood that mudra is not necessarily just the position of the hands. Shakti, Kundalini (and hence Bhairavi) is also called mudra. If revered, she herself elevates the practitioner's consciousness, and through this he becomes the urdhvareta.

In Kashmir Shaivism, Bhairavi mudra, together with karankini-mudra, krodhini-mudra, lelyhana-mudra, and khechari-mudra, form a single system of mudras at the center of which is khechari (the rest mudras, in fact, are aspects of it). In "Tantraloka" mentions them in 32nd ahnika (verse 5-6), where these mudras and a number of others are described as manifestations of khechari-mudra. Overall mudras are characterized as the principle प्रतिबिम्बोदयो (pratibimbodayo), as a reflection of divine awareness between the subject and the object(s). The practice of these five mudras is mentioned in the famous “Vijnanabhairava-tantra” (dharana 54) and a number of other texts, such as the “Mahartha-manjari”. Naths attribute "Mahartha-manjari" to Gorakshanath, since the text identifies the author of the text Maheshvarananda and Gorakshanath. Also these mudras are related to the rise of Kundalini-shakti by her awakening through ritual sexual practices, through the five centers in the practitioner's microcosm, starting at the kanda in the lower part of the body and to bhrumadhya. When Kundalini ascends, these mudras go in the following order: karankini, krodhini, bhairavi, lelyhana, and then bhrumadhya-khechari. This practice can include both internal meditation and object-focused awareness. Also, various texts say that these mudras reveal different perfections. "Karankini" is translated as "frame", karankini-mudra gives knowledge of the external form as very conditional, because behind it there is a divine dimension. This experience is called jnana-siddhi. "Krodhini" means the destructive qualities of Bhairava or Bhairavi, when the tattva of the Deity, represented in the form of a fire-consuming mantra, absorbs the basic elements of creation. Bhairavi mudra points to the unity of the outer and inner spaces, the sense of their union, which is analogous to the tantric Shambhavi-mudra, described in numerous tantras. Gorakshanath in "Amanaska Yoga" describes it as "unblinking sight directed outwards" (with simultaneous inner awareness). Bhairavi mudra bestows melapa-siddhi - the realization of the union of consciousness and outer space, as well as Bhairava and Yogini. Lelihana-mudra, symbolizing the absorption of nectar, "kulamrita", bestows shakta-siddhi, in fact, it is the "strengthened" form of Bhairavi-mudra. And khechari-mudra grants the state of immersion into the omnipresent space of appeasement, which is revealed by Shambhava-siddhi.

A list of the main mudras can be found here.