the fearsome form of Shiva

Shiva-Bhairava is many-armed, holds a weapon and a severed human head in his hands, which symbolizes the cutting off duality and going beyond the limitations of the mind. 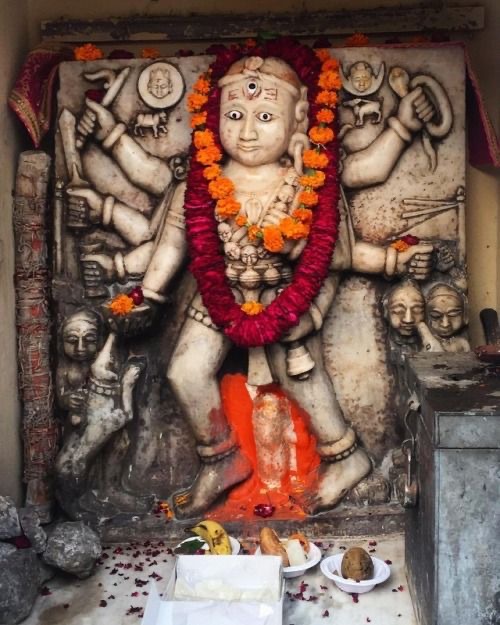 Bhairava is the full form of Shankara, Paramatma.
People remain ignorant [of this], blinded by the Shiva’s illusion.

The name of Bhairava has various interpretations:

1. The word "Bhairava" originates in the North Indian language and literally means "fear". Thus, the meaning of the name of Bhairava can have two interpretations:

2. Bhairava is so named because he protects the Universe (bharaṇa) and because he is terrible (bhīshaṇa). He is also known as Kala-bhairava, because even Kala (the god of death) trembles before him; as Āmarddaka, because he kills wicked people (marddana); and as Pāpabhaksha​ṇa, because he absorbs the sins of his bhaktas. According to the syllable र  "ra" (to give, to bestow) in the name of Bhairava, he is called Sarvadaḥ, the bestower of everything. According to the syllable व "va" (to be comprehensive, all-pervading, spreading) Bhairava is called Vyāpakaḥ because of the spread of his presence everywhere.

3. According to the Trika philosophy, Bhairava is the Supreme Reality, beyond contemplation, completely transcendent.

The word "Bhairava" in Sanskrit consists of four letters, each of those has a deep meaning:

Thus, Bhairava means "One whose light of consciousness (Shiva), combined with his power of activity (Shakti), realizes the entire Universe as himself.”

4. In “Parātrimshikā” Abhinavagupta gives the following interpretation of Bhairava:

The essence (nature) of Bhairava is what sustains [the universe], and this is the sound of the great mantra [So Ham].

5. Kshemaraja, in his commentary Udyota, gives a different interpretation. Its essence is that each letter in the name of "Bhairava" symbolizes the three States:

Thus, Bhairava contains all three aspects of the Divine. He is the gunas themselves, but also the one who is beyond them, controls them and their various combinations. 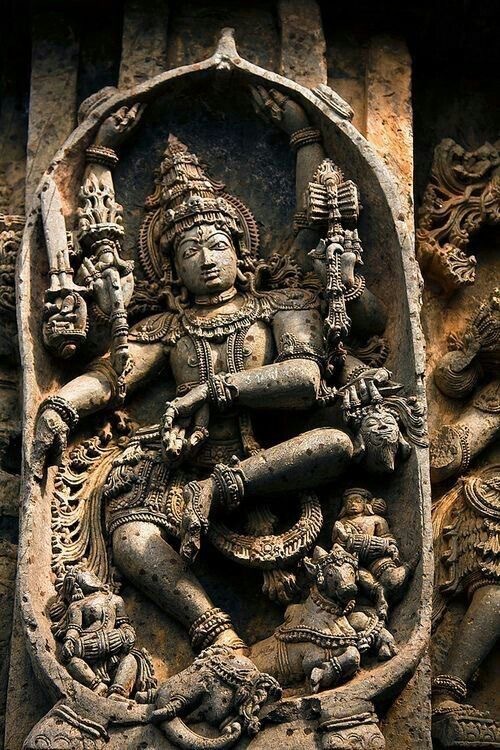 Svarupa, or the essential nature of Bhairava, is vijnana (comprehension of Truth), bodha or mahabodha (correct understanding), chit or chaitanya (the highest pure consciousness). The main characteristic of which is svatantraya – true freedom, manifested in iccha, jnana and kriya.

That state of Bhairava, which is full of the bliss of not being different from the whole world, is Bhairavi or Shakti of Bhairava. This state is vijnana – a state of consciousness that is free from all mental constructions. The attainment of Vijnana-bhairava consciousness is the true goal of human life.

The highest state of Bhairava is free from all ideas related to direction and time, it cannot be correctly described by any particular space or definition. Truly, it can neither be indicated nor described in words. (14)

It is possible to comprehend this only with complete freedom from all thought-constructions. It is possible to have an experience of this bliss in your own innermost Self. This state of Bhairava, full of bliss of indistinguishability from the whole Universe, is only Bhairavi, Shakti of Bhairava. (15)

It must truly be known as His essential nature, unsullied and containing the whole Universe. So, being the state of the Supreme Reality, who can be the object of worship, who can be satisfied with worship. (16)

This is the nishkala state of Bhairava, glorified in this way, one is the Highest state. It is declared as Para-devi, the Supreme Goddess, Para, i.e. the Supreme, not only in the name, but because it really is Its highest form. (17)

“Vishnudharmottara Purana” says that Bhairava has a flabby belly, round yellow eyes, protruding fangs and wide nostrils, he wears a garland of skulls, is decorated with snakes and other ornaments. Bhairava has a dark face like a rain cloud, and as a garment he has an elephant skin. Bhairava has several hands in which he holds different types of weapons. Bhairava is the lord of Kashi.

Bhairava’s vahana is a dog. Dogs are well known for their dedication and ability to protect their loved ones and guard the house. Therefore, Lord Bhairava, having chosen a dog as his vahana, reflects the idea of his eternal intercession and patronage. He is the protector of all his devotees in every way.

According to myths, four dogs run around Shiva-Bhairava, who personify the Vedas. They reveal secret knowledge with the help of omens for the benefit of the Tantra practitioner. In Tantric terminology, this is called Shiva-bhoga.

In different traditions, there may be different mantras and forms of worship for the same Bhairava’s aspect, different interpretations of the Deity. For example, Vatuka popular in Shrividya, Sarvakarshana-Bhairava, Amrita-Bhairava – in Kashmiri Shaivism, Mahakala-Bhairava – among Naths, and Akasha-Bhairava – in Kubjika (Newar tantrism). Although Kala-bhairava, Vatuka, eight Bhairavas are popular everywhere. Eight Bhairavas are identified with eight Matrikas, hence the connection with the manifestations of Durga; in some traditions they are considered identical, for example, among the Newar Tantriks.

The Punishment of Lord Brahma

According to the legend, Lord Brahma once possessed five heads, as well as Lord Shiva. But Brahma became proud. Because of his arrogance, he did not pay his respects to Devas and declared himself as the Supreme God in front of the sages performing penance. He forced these wise men to pray only to him, because he considered himself the most Important God. The four Vedas: Rig-, Yajur-, Sama- and Atharvaveda – could not stand Brahma’s outrages and appeared before the sages and Lord Brahma with proofs that only Lord Shiva is the true and only Supreme God. But despite this, Lord Brahma had no remorse. Finally, Shiva decided to act and took the form of Bhairava.

With the nail of the pinky of his left hand, Bhairava cut off Brahma’s fifth head, facing upwards. Thus, Bhairava committed a grave sin against a brahmin, and for this reason, Lord Brahma’s severed head remained stuck to Bhairava's left hand. Therefore, Lord Bhairava is also referred to as Kabalam Enthiya Thirukarathinnar’ (kabalam – skull, enthiya – holding; thirukarathinar – sacred hand). To atone for the sin of killing a brahmin, Bhairava took a vow of wandering and living on alms until he reached the city Kashi. In Kashi (Varanasi) Bhairava was able to free himself from this sin.

According to another version of the legend, Bhairava cut off Brahma's head because Brahma passionately looked at his own daughter, who could not hide from him anywhere, since 4 heads were watching her in all directions, and even when she rose into the sky, the fifth head of Brahma looked at her covetously. Shiva decided to cut off the 5th head so that the poor girl could find at least some salvation.

Shiva said:
Oh Kala-Bhairava, first you will punish this Brahma. You will possess the greatness of the God of Death and will be known as Kala-Raja.

You are known as Bhairava because you have terrible features and are able to support the entire universe. Even Kala (time) is afraid of you, and therefore you will be known as Kala-bhairava. 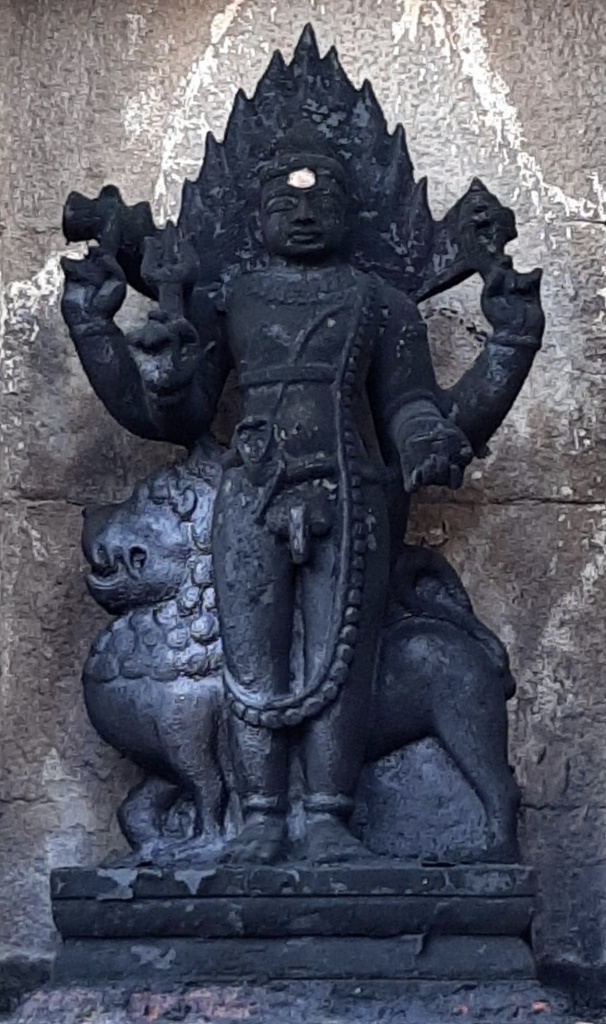 This legend shows the supreme justice that Bhairava does: if someone commits immoral acts, he will be punished regardless of his current status and position. And the opposite is also true – Lord Bhairava will always come to the aid of His devotees and protect them from unfair treatment.

Bhairava – the eliminater of Navagraha dosha

Bhairava is the ruler of Kala-chakra (kāla – “time”; cakra – “wheel”) or Cycles of Time.The Kala chakra controls everything in the Universe: from living beings to planets, stars, galaxies, etc. Bhairava is beyond time and space. Therefore, he is worshiped to mitigate and eliminate the unfavorable planetary influences.

It is believed that Navagrahas (nine planets) play an important role in determining a person's fate, that they bring all joyful and sad events, which in turn are completely based on a person's karma. Periods of difficult planetary influences experienced by a person due to his negative karma are called Navagraha-dosha or dosha of a certain planet (for example, Shani-dosha). Since Lord Bhairava controls the entire Universe, by worshiping him regularly, one can avoid the harsh phases of life caused by planetary influences.

According to one legend, Bhairava is Guru (gu – darkness, ignorance, ru –destruction; Guru is the one who dispels the darkness of ignorance) of Lord Shaneshvara (ruler of the planet Saturn). Bhairava blessed Shani by awarding him the position of one of the nine planets (Navagrahas) and made him the most powerful among them. Therefore, it is believed that the worship of Bhairava is able to eliminate the adverse influence of difficult astrological periods of Saturn's influence, such as Ashtama-Shani (Saturn's transit through the 8th house), Sade-sati (seven and a half years of Saturn's transit through one’s Moon sign and two neighboring signs), Shani-dasha (a period lasting for 19 years).

Periods under the rule of Shaneshvara are considered quite difficult in Indian astrology. During these periods, a person experiences emotional, physical and mental problems. To ease the tension of this period, one should worship Bhairava on Saturdays.

Bhairava jayanti is celebrated on the eighth day after the full moon in the month of Kartika in the southern style or Mrigashira in the northern style (from mid-November to early December). Great celebrations and special prayers are held in Shiva temples on this day on the occasion of the birthday of Lord Bhairava. Traditionally Tuesday, Friday, Saturday, Krishna-ashtami (the eighth day after the full moon) are favorable for worshiping Lord Bhairava.