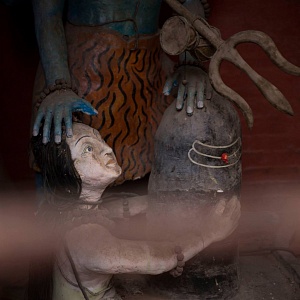 Heart aspiration to God. "Heart" — the emotional side of bhakti (relationship with the Supreme can be experienced as friendship, love and so on. Feelings are seen as a gift from God). It is also about opposing bhakti to the mind, which has a vibrating nature (bhakti out of raga and dvesha is stable) and an intellectual perception of Absolut, book knowledge. (The difference between jnyana and bhakti is subtle — however both of them have focus on the object of perception, lakshya).

Nirguna-bhakti is the aspiration for the one who is lacking qualities, transcendental Brahman and for being one with him as Atman. Saguna-bhakti corresponds to manifested Brahman with attributes and qualities.

Nirguna- and saguna-bhakti nourish and help to raise each other. Thanks to Bhakti stability can be reached in the path of yoga.

Hanuman, worshiped as Yogi Birbankanath, is considered to be the embodiment of bhakti.

More about bhakti is in the article.