The first Deity of Hindu trinity (trimurti), responsible for creation of the world.

It is described that Brahma's skin color is reddish and he is dressed in red clothes. Brahma has four heads, four faces and four arms. It is said that each of his four heads continuously recites one of the four Vedas. Brahma is often represented with a white beard (especially in Northern India), which symbolizes the eternal nature of his existence. Unlike most other Hindu deities, Brahma doesn’t hold any weapons in his hands. In one of his hands he holds a scepter in the shape of a ladle or a large spoon, which is associated with spilling of ghee on the sacred fire of Vedic sacrifices and symbolizes that Brahma is the Lord of yajnas. In the other of his hands he holds kamandala, akshamala, and books. Kamandala is  a vessel with water made of metal or even from a coconut shell. The water in this vessel symbolizes primordial, all-absorbing ether, from which first elements of creation appeared. Akshamala is a prayer beads, which he uses to count universal time. Books are Vedas, but sometimes he holds a lotus flower.

The vehicle or vahana of Brahma is divine swan. The swan is venerated in Indian culture for its special quality called nira-kashira-viveka, or the ability to separate milk from a mixture of milk and water. This ability of the swan indicates that an individual should be able to separate the good from the bad, accepting what has spiritual value and rejecting what doesn’t have it.

In the last Vedic period, Brahma was identified with Prajapati, the creator of all beings. Most common other Brahma epithets-hypostases are: Pitamaha (Great Patriarch), Kamalasana (Sitting on the Lotus), Hiranyagarbha (Born from Golden Egg), Savitri-pathi (Savitri's Spouse), Tvashtri (Creator), Dhatri (Installer), Vidhatri (Distributor), Loka-Guru (Mentor of the World), Parameshthin (The Highest).

In Nath Tradition, it is believed that Brahma, after his legendary dispute with Vishnu about who of them was more powerful, met Gorakshanath, who showed him the yogic path. Thus Brahma acquired a yogic shape (yoga-rupa) and became known as Satyanath. 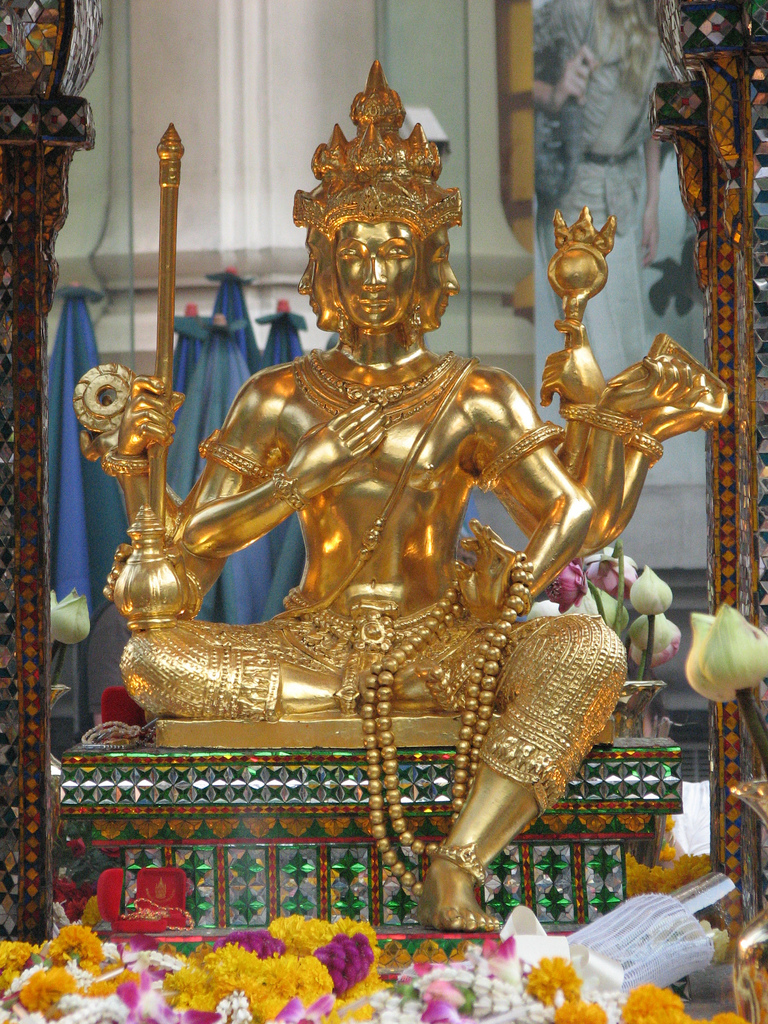 Although Brahma's prayers are part of almost all Hindu rituals, there are very few temples dedicated to him. The most significant and sacred one is considered to be the temple of Brahma in Pushkar, Rajasthan. Every year, on the full moon of Kartika lunar month (October — November), a major religious festival honoring Brahma is held there. Thousands of pilgrims come on this day to take ablution in the sacred Pushkar Lake adjoining the temple.