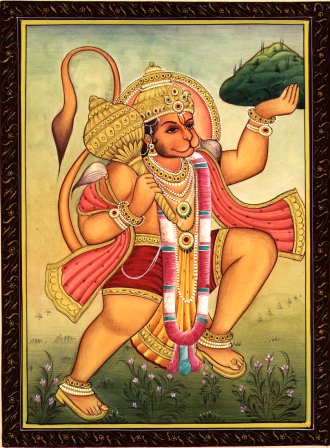 The divine monkey, the son of the wind god Vayu and apsara Punjistala. One of the main characters of the Ramayana, the leader of one of the Vanara troops, is also the friend of Rama and Sita.

In Shivaism it is considered one of the avatars of Shiva. Hanuman inherited from his father the ability to fly, move fast, and also incredible power. Soon after his birth, he saw the sun, decided that this is a fruit and tried to eat it. Indra saw this and threw his vajra into Hanuman, breaking his jaw. Hanuman fell unconscious to the ground. The upset Vayu together with his son retired to voluntary imprisonment. Soon, all life in the world began to suffocate and Indra, in order to pacify Vayu, healed Hanuman. After this incident, Hanuman got his name, which in Sanskrit means "broken jaw".

Hanuman symbolizes power, unparalleled devotion and selfless service. He is a brahmacharin, the greatest devotee of Lord Rama, humility is his distinctive feature.

The greatness of Hanuman is explained by Lord Rama in the Ramayana: Rama told Hanuman, "I owe a great debt to you, o mighty hero. You did wonderful, superhuman deeds, and did not want anything in return. You threw away the precious pearl garland given to you by Sita. How can I thank you and return this debt to you? I will forever remain deeply indebted to you, I will give you eternal life. Everyone will honor and worship you as they worship me, your image will be on the doors of my temple, and you will be honored and worshiped in the first place. Each time when I am praised or any stories is being read about me, you will be praised in first place.You can do anything, even what is not up to me!"

Gates: Hanuman Chalisa and Hanuman Ashtaka are read throughout the day. Some devotees worship Hanuman also on the previous day.

It is also believed that Hanuman can eliminate the negative influence of Shani. There is a belief that worship of Hanuman on Saturday (day of Shani – Saturn) eliminates the negative influence and difficulties created by Shani on the horoscope. There is a story describing why it is so: Ravana (the demon king from Ramayana) defeated all the Devas (demigods) and took all the grahas (planets in astrology) under its control by suppressing them with feet.

Ravana was a great astrologer. When his eldest son, Indrajit, was about to be born, Ravana forcibly kept all the grahas in the most favorable astrological positions. This was very disturbing for Devas, because if the son of Ravana is born under the astrologically favorable position of the planets, he will be unbeatable. The Devas asked all the grahas to leave their favorable position, but Devas said they could not get out of the footsteps of Ravana. Only Shani (Saturn) agreed to help, but for this he needs to look in the face of Ravana.

There is a belief that Shani drishti, or Shani's gaze, is as deadly as his position. It is believed that Shani has a bad eye and his view causes serious problems. Saint Narada came to the palace of Ravana and saw Shani and other planets trampled by the feet of Ravana. Saint Narada praised Ravana's victory over the grahas, but said that the real symbol of victory is the footprint on the chest, and not on the back of the defeated. Ravana agreed with Narada's observation and turned the planets around. As soon as Shani turned over, his gaze fell on Ravana's face, and dealt a blow of adversity.

To take revenge on Shani, Ravana kept him in a small prison that never opened, so that no one would see Shani's face again. A few years later, when Hanuman arrived in Lanka (the realm of Ravana) as Rama's messenger, he heard Shani shouting out of a dark prison without any openings. Hanuman destroyed the dungeon and saved Shani. Shani said that he is very grateful for the help, but with a glance he cursed Hanuman. This is the divine state of things and no one can avoid it. Hanuman asked what suffering awaiting for him. Shani replied: "First I will attack your head and this will force you to leave your home, wife, son and go the road of suffering." Hanuman said that Shani can definitely come to his head, since he does not have a family and abodes at the feet of Lord Rama.

When Hanuman started the battle with the demons who pursued him in Lanka, he shook with his head huge boulders, trees and stones, from which Shani felt pain and suffering. Finally, Shani could not stand it and left Hanuman's head, saying: “You are the only one who will not have my adverse influence. I can`t trouble you. Since you saved me from the prison of Ravana, I would like to thank you.” As a gift, Hanuman asked not to curse his devotees. Shani promised that this will happen.