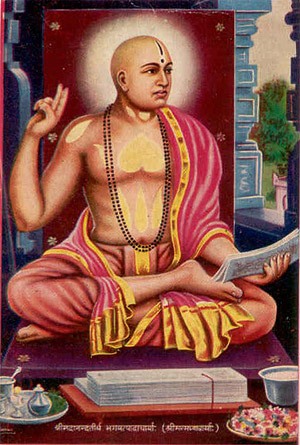 Madhvacharya (Madhava, Madhva) is a famous Hindu philosopher, Vaishnavist, creator and preacher of the dvaita-vedanta. Before receiving the name Madhvacharya on his spiritual path is also known under the names of Purnaprajnya and Anandateertha.

He was born in 1238 (according to other sources in 1197) not far from Udupi (Karnataka), from his birth he was called Vasudeva. According to legends, in his childhood he performed incredible miracles, like at the age of five, saving his mother, killed a demon in the guise of a snake with his big toe. He left home and at 12 years to practice sannyasa, becoming a disciple of Achyutapreksha (follower of Shankaracharya and his advaita).

However, he did not consider the approach of the advaitists to be correct and began to study classical works, forming his own views. His dualistic teaching (one of the postulates of which is that God, or the world soul (Brahman) and the individual soul (jiva) is not the same), he formed diametrically opposed to the teachings of Shankara (in which God, or the world-soul Brahman, and the individual soul, or jiva, is one).

By adopting the name of Madhava, he actively preached the dvaita-vedanta, having twice passed throughout India, winning discussions with many scholars and trying to prove the infidelity of Shankaracharya's teachings. During the journeys, he received darshan and blessing from the sage Vyasadeva. 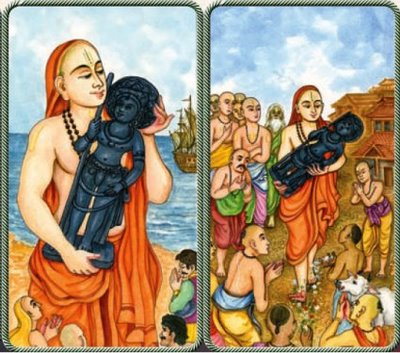 Madhvacharya founded the temple of Krishna in the Udupi city - according to the legend, Madhvacharya helped his ship to escape from the storm and in gratitude for this could take as a gift from the ship any object. Madhvacharya took a piece of clay, inside of which was Krishna's murti, made, according to the legend, by Krishna himself more than 5 thousand years ago. This is the murti Madhavacharya placed in the temple in Udupi, the succession in which (founded by Madhava) continues to this day.

In Udupi Madhava founded eight monasteries, the abbots of which are to be the abbots of the main temple one by one. Madhava established a very high standard of worship in the Temple, carefully guarding his tradition. He left the world at the age of 79 years.

Madhava is credited with about 40 works, including commentaries on the Brahma-sutras, the Bhagavad-gita and the main upanishadas, partial commentaries on Rigveda, Mahabharata, Bhagavata-purana and 10 philosophical treatises.