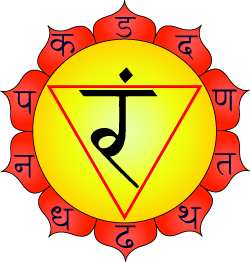 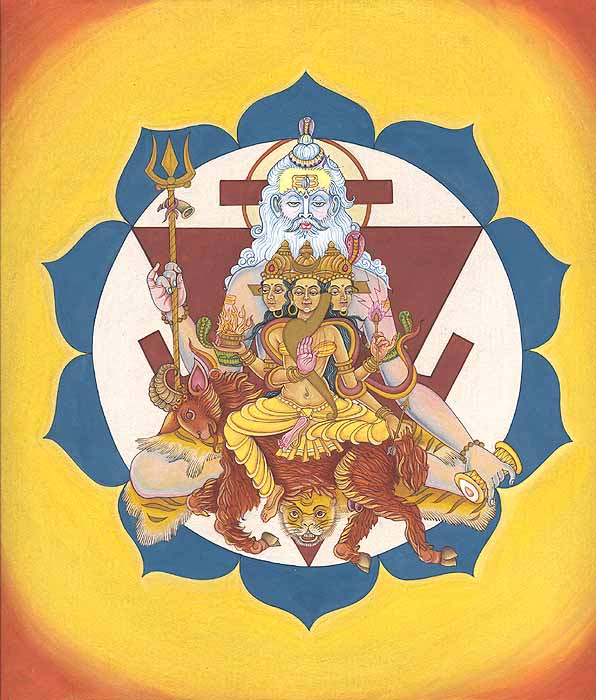 In its center one should contemplate Kundalini-shakti, coiled in a fivefold ring, like a snake, and shining like ten million rising suns. She is Madhyama Shakti, the bestower of perfections.

In manipura, the sound of pashyanti is realized – the first manifestation of consciousness in the form of Omkara. According to some texts, here, in the area of ​​nabhi, is located kanda – the center of all channels (nadis), which radiate from kanda to all parts of the body.

Manipura is the chakra responsible for power, will (individual, not spiritual, as in the case of ajna), self-confidence, the ability to organize and manage people.

"Viveka-Martanda" describes meditation in this chakra as follows:

A yogi who meditates on Atman in manipuraka, shining like the rising sun, fixing his gaze on the tip of the nose, acquires the ability to influence the whole world.

The very first mention of this chakra is found in one of the sutras of Patanjali, and, most interestingly, there, for the first time, this center was called with the term "chakra", contrary to popular belief that chakra system appeared much later. However, as a "chakra", in relation to the centers, there is a mention of only one navel chakra:

[Through sanyama] at the navel chakra (नाभिचक्रे nābhicakre) one gains knowledge about the body’s structure.

It is due to the fact that all energy channels, which spread to all parts of the body,  are connected in this center, is how I understand this. And Patanjali also mentions nadis in another sutra. Obviously, then knowledge about the channels already existed, it is just that there is no detailed description of them in sutras.

There is still a definition for the terms मणि maṇi and पूर pūra in the texts. As for पूर pūra, everything is more or less obvious, this is a region or abode, but regarding मणि maṇi, I haven't come across detailed explanations in the English-language literature. But it exists in Sanskrit sources, in Śrīmad‌bhāgavata Purāṇa (37), and same text is also copied in other sources, for example in "Gautamya-tantra" (chapter 12, sloka 47), it is also quoted by Brahadtantrasara (chapter 5):

This lotus (chakra) has the color of a cloud and is full of abundant radiance.
That lotus is like the effulgence of a jewel and is therefore called manipura.

So, there is a clear indication of the gem's ability to glow तेजस् tejas. Also, in many Tantras, gemstones, in addition to their value, have other symbolism, such as strength and inviolability. In a metaphorical sense, these are certain states of consciousness of a high level. In some Tantras, these are psychophysical fluids and substances, which are also associated with very high and deep states of consciousness, as the essence of all forms.

If youlook at this center from a physiological point of view, this is the area of ​​the digestive fire, but in the metaphysics of Hinduism, Jaṭharāgni and Vaiśvānara still have a universal meaning. Vaiśvānara pervades the universe by itself, therefore it is fire and life inside everything. Therefore, through this center in a state of self-sacrifice we attain the essence that shines in everyone. This essence is nothing but ourselves, however, it exists within everyone. As human beings, we all have the same arms, legs, head and other structures, because we are programmed and coded from somewhere above. Meditating on this center and comprehending this special essence, we open this universal code for ourselves, gaining knowledge about the human body, it is what Patanjali says.