Muladhara has a four-petal lotus, there are four petals and the letters vaṃ, śaṃ, ṣaṃ, saṃ on them. Inside of the lotus there is bija laṃ. Lotus petals are associated with four types of bliss: paramananda (supreme bliss), sahajananda (natural bliss), virananda (heroic bliss) and yogananda (bliss achieved through union with Absolute in dhyana and samadhi). 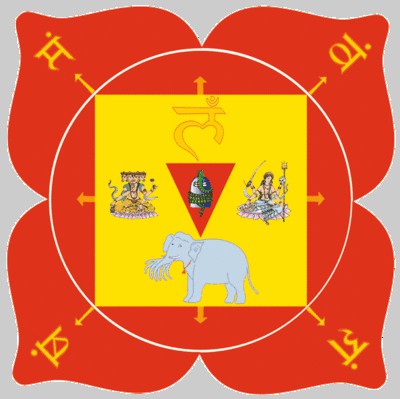 In the center of lotus there is a yellow square - the symbol of the earth, in which a triangle is inscribed, with the apex directed downward, the symbol of the yoni, Kamakhya (creation). In the center of this triangle there is lingam, wrapped around with Kundalini. Also excellent Yogi Ganesha (Sri Gajabeli Gajakantharnath), the patron of material world, and his shaktis Siddhi and Buddhi are in the square as well. Sri Vidya tradition relates the base of Sriyantra (square or bhupur) to the muladhara chakra. In the same tradition, muladhara can be correlated with the center of Shriyantra (kama-kala), where kama is intention, kala is creation manifestation of the Will of God.

Muladhara chakra, or brahma chakra, is also associated with the highest Prakriti as the creative force of Shakti, which is connected by the flow of nada in the union with eternal Brahman or Shiva. Here the sound is the present form of paravak, in the unmanifested state as primary Shabda-Brahman. This paravak (supreme sound) corresponds to the union of Shiva and his ananda-shakti.

Some texts place Brahma in this chakra as the creator of the material world, hence the chakra is called "brahma-chakra".

Yogi, who meditates on Atman in the adhara chakra with four petals and the color of gold, fixing his gaze on the tip of the nose, finds happiness. (168)

Gheranda-samhita describes dharana for the element of earth (prithvi-dharana) in the muladhara chakra:

The element of earth is yellow, quadrangular, associated with Brahma and its bija is laṃ. Contemplate this element (in muladhara) and fix prana and citta there together with kumbhaka for 2 hours. This lowest of dharanas gives stability and dominion over the elements of earth. (3.70)