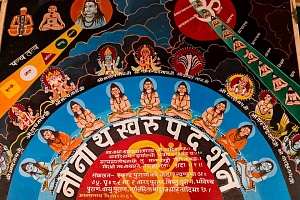 Nath Sampradaya is the most ancient yoga tradition, originated from tantra during the times of Maha Yoga of Gorakshanath: Pashupat, Shaiva-siddhanta, Kapalika, Kalamukhi and from earlier systems. These systems originated from vedic sources such as: four vedic samhitas, brahmanas, aranyakas, upanishads.

From these three, Gorakshanath is worshiped by all yogis as the realized complete Maha-yogishvara, free from all attachments, limitations, ignorance, ego, feelings of addiction or disgust as he is incarnated into the human body.

In the sacred literature of Sampradaya, mahayogi Matsyendranath is mentioned as the direct disciple of Shiva Adinath and his main disciple Gorakshanath as the true incarnation of Shiva. It is known that Nath Sampradaya was formed by Matsyendranath as a yoga-tantric teaching «Kula». Later this tradition was improved by Maha Yogi Shiva Gorakshanath who gathered the spiritual experience of all yogis in one fine system of yoga.

With time, the tradition was divided in many branches, called panths, twelve of which were considered the main components of Nath Sampradaya:

The origin of these panths is not clear. They practically follow the same path of yoga: they all worship Shiva, and they are all united by Gorakshanath as Maha-yogishvara. Each of the founders of the following panths received directions about practice of yoga from Gorakshanath.

Each panth has its own main centers in different areas of the country, but all of them are worshiped by others as the shrine.

Gorakhpur is known as the center of Dharmanath-panth as well as Ram-panth, which is considered to be the place of tapasya of Gorakshanath. Ganga-Sagar is the most sacred center of Kapil-panth with Goraksha-Banshi being its main center. Haridvar is also a very important center of the Sampradaya.