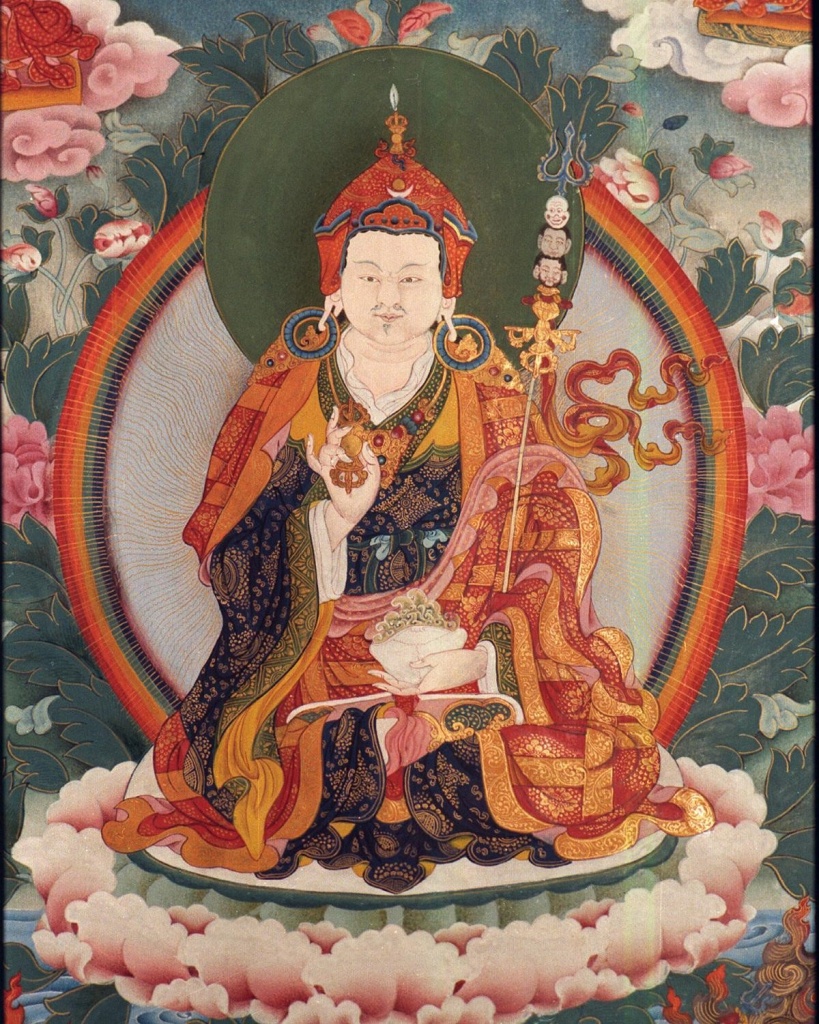 In Tibetan Buddhism, he is the ancestor of the tradition of the Tertons and the cycle of the terma, i.e. secret treasures hidden by Guru Rinpoche himself in the form of various artifacts: sacred texts of teaching, manuscripts and ritual objects. In the oldest Tibetan school of Nyingma, he is recognized as the second Buddha. Also in the tradition there are numerous manifestations and incarnations of Padmasambhava, usually there are eight such forms.

It is very difficult to separate the many legendary stories from the life of Padmasambhava from real historical facts. According to the text "Mahaparinirvana-sutra," the Buddha Shakyamuni himself, shortly before his departure for paranirvana, predicted his birth as the greatest mahasiddha and special embodiment of the Buddha Amitabha. Padmakara was born in the country of Uddiyana (in the Tibetan sources Urgyen) in a lotus flower in the middle of Dhanakosh Lake, where, as the child, he was found and adopted by King Indrabhuti. In other versions of the birth it is said that he appeared from a flash of lightning on the top of the Namchak mountain.

Even in his youth, he was expelled for the murder of a court dignitary, whose death was inevitable and foreseen by Padmasambhava. For the Crown Prince, this was the only opportunity to become a traveling sadhus, because King Indrabhuti refused Padmasambhava in his requests to accept renunciation. After leaving the palace, he began his travels through the numerous cemeteries, practicing the tantric forms of yoga, as well as conquering all kinds of male and female spirits, as a result gaining powerful siddhis. Padmasambhava was blessed by the dakinis of wisdom, having received instructions for secret teachings. He also studied yoga shastra from Acharya Prabhahasti, vinaya from Ananda, and the teachings of tantra, including Dzogchen, from Prahevajra (Tibetian: Garab Dorje), Shrissingha, Nagarjuna, Humkara, Vimalamitra and Buddhaguhya.

In the mid  of 8th century, Padmakara arrived in Tibet at the invitation of the Tibetan king Trisong Decent, who intended to spread the new religion, but he was hampered by the priests of the Bon cult, the traditional religion for Tibet, and the local deities and demons who were obstructing the construction of temples. With the help of powerful tantric rituals Padmasambhava subordinated to himself all kinds of harmful forces, connecting the deities of the area with an obligation to protect the doctrine of dharma.

He also won the competitions of the Bonpo priests by demonstrating various miracles, which they could not repeat. Thus, the power of tantric yoga made a great impression on the Tibetans, which contributed to the faster spread of Buddhism, and local beliefs, deities and rituals were easily integrated with the new doctrine. Thanks to the joint efforts of Padmasambhava and Buddhist scholar Shantarakshita, the first Buddhist temple of Samye was built in Tibet.

Various hagiographies give different information about the subsequent fate of Guru Rinpoche.  According to some sources, he stayed in Tibet for another 55 and 6 months, the other suggest he dissolved into the rainbow light after some time and now dwells in the fields of Rakshasas, where he preaches dharma. It is also known that he left behind 25 Tibetan disciples, among them his wife, the queen Yeshe Tsogyal and the Tibetan king Trisong Decent.

There is an interesting hypothesis that suggest that Padmasambhava is closely connected with the teaching of the Naths directly through Guru Gorakshanath. The Tibetan medieval historian Taranatha mentions that certain Buddhist siddha-yogi Anangavajra, also known as Gorakshanath, had a disciple named Padmavajra Sarorukha. In his writings, Dr. Shahidulah writes that this is none other than Padmasambhava himself, who brought the teachings of dzogchen (ati-yoga) to Tibet. Shahidulah identifies Sarorukh and Padmasambhava, who founded 775 Samye monasteries.