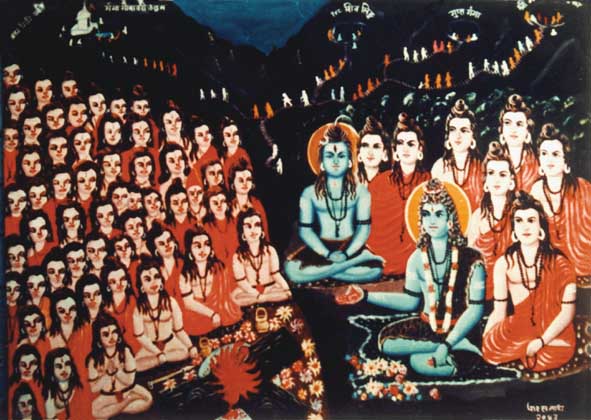 Branch, a division of Nath Sampradaya.

Traditionally there are 12 main panths and several secondary, "half" (adho-) panths, each of which adheres to its own views on the practice of yoga and tantra.  The main panths are far from compromising with society, the half-panths are partially (albeit formally) integrated into it, into the caste system; many of their representatives have own families.

Each panth has main math (which contains the main gaddi - "throne"), and the mahant who controls it and directs the entire branch.

Of the 12 main panths, the first 6 build their parampara to Shiva, the other 6 – to Gorakshanath. The immediate founders can be called their disciples, including the Deities in yogic form.

It is said that originally there were 18 Shiva panths (probably, these were yogis of the Shaivite lineages of Pashupata, Kalamukha, Kapalika, etc.) and 12 Gorakshanath panths. Over time, a lot has changed, some lines rose, others lost influence, dissolved in larger directions or disappeared, but even now Jamat (controlling body of the Tradition) is headed by two nathas – mahant of 12 and mahant of 18, personifying Gorakshanath and Shiva with  their panths respectively.

In the past, the features of the subdivisions were expressed clearly, today the way of life in different panths differs little. Belonging to one line or another is crucial for a narrow range of issues related to property rights and the appointment to certain positions. So, temples and ashrams are listed for specific branches, therefore, the successor of the mahant, ideally, should be from the same panth as his predecessor (otherwise the gaddi may go to another unit). There is a traditional distribution of responsibilities between the branches: to perform the most important rituals of the Sampradaya during significant events, for example, is prescribed for the representatives of Satya-panth.