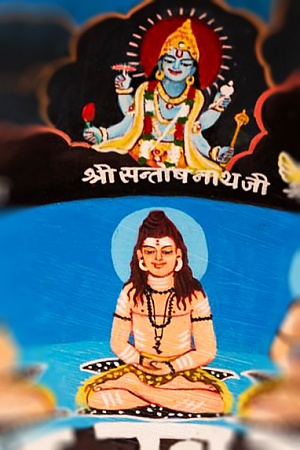 One of the Shiva's panths.

Before the main math was situated in Nohar (Rajasthan), according to the information from the 1920s – in Delhi. There is an opinion that originally it was Gorakhpur Gorakshanath - mandir (before it became part of the dharma-panth).

"Ram ke" means "belonged to Rama": he, as long as Santoshnath, was considered to be the founder of the panth (only Parashurama can be called the protector). "Gopal" ("shepherd", "one who takes care of cows") is connected with Krishna; one of his names being Gopalnath.

There is a legend that after the war (described in Mahabharata), Krishna left the worldly life as many people accused him in provoking the conflict. With his wife he came to Goraksha to become a disciple and obtain a shelter. However yogis resisted the presence of the woman (even tried to exchange her for charas). Then Gorakhnath put a kangan on Krishna's arm (a bracelet that symbolizes the protection of the one who wears it) and called her his sister.

The reference about this event exists in «Balashtak» which is recited by naths during their daily arati: