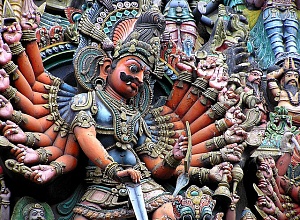 
Ravana (or Dashanand, also Dashagriva, "Ten") is the ruler of Lanka (the territory of modern Sri Lanka), the great-grandson of Brahma and the grandson of Rishi Pulastya, one of the main characters in the ancient Indian epic "Ramayana". Ravana is described as a rakshas (demon) with ten heads and twenty arms, whose body was covered with scars from wounds received in numerous battles. Through prolonged austerity (over 10,000 years), Ravana received the mercy of Brahma: he could not be killed by either a god or another demon. Thanks to this gift, he became practically invulnerable and, overcome by arrogance and a desire for power, caused many troubles in all three worlds (heaven, earth, and the underworld).

In particular, he captured by force the city of Lanka, which was given to his brother Kubera and was an ideal city built by the celestial architect Vishvakarman. It is believed that Ravana was endowed with great strength, could move the seas and split mountains, and also take any form. 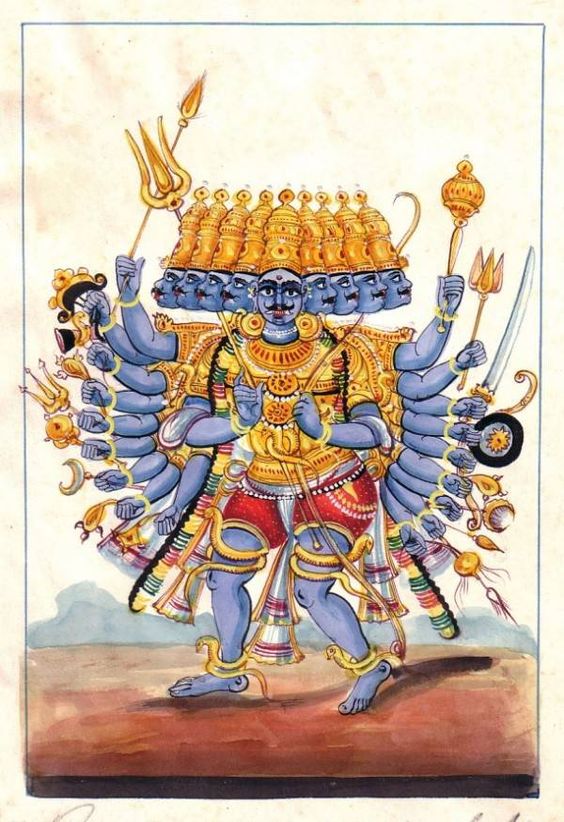 It is worth noting that Ravana is described as an extraordinary person: he had different qualities and even talents. Ravana was an expert in Jyotish (astrology) and Ayurvedic medicine; under him, science developed greatly, and Ravana himself moved on a vimana – a flying chariot (according to another version, he took it from Kubera).

In addition, Ravana was a devotee of Shiva and it is he who is credited with composing the hymn "Shiva Tandava Stotra" – a famous text in praise of Mahadev. According to the legend, Ravana, then known as Dashanand, misinterpreted the advice of Narada Muni and wanted to bring Shiva to Lanka. Considering himself the greatest devotee of Mahadev, Dashanand decided to move Kailash together with God, but as soon as he began to lift the mountain, Mahadev crushed it and the Rakshasa himself with his big toe. He experienced severe pain and his roar became heard in all three worlds, which is why Dashanand received the name Ravana - "Howler". For 14 days, the demon repeated Shiva's mantras, asked for forgiveness and begged to be released.

In the end, he, filled with great devotion, sang "Shiva Tandava Stotra", which pleased Shiva and gained his grace.

A curse was placed on Ravana that a woman would be the cause of his death. And it is carried out through Sita and Rama, who are the avatars of Lakshmi and Vishnu, who were born in human form for this purpose. Due to his arrogance, Ravana was not afraid of people, because he considered himself much stronger than them. Having heard about the beauty of Sita, he steals her and delivers her to his palace. In a heroic way, Rama, with the help of his brother Lakshman, Hanuman, and an army of monkeys, attacks Lanka, frees Sita and kills Ravana.

However, not everything is so clear. The first chapter of the 7th song of "Bhagavata Purana" tells that Ravana and Kumbhakarna (the giant rakshasa who was awakened by Ravana and also took part in the battle with Rama) are none other than the gatekeepers of the kingdom of Vishnu, Jaya, and Vijaya, who were forced to be born as enemies of their god due to the curse of the Kumar brothers. Thus, Shri Rama, after killing Ravana and Kumbhakarna, granted liberation to the devotees.