Tantric goddess who is part of the group of ten Mahavidyas (Dasha-mahavidya). 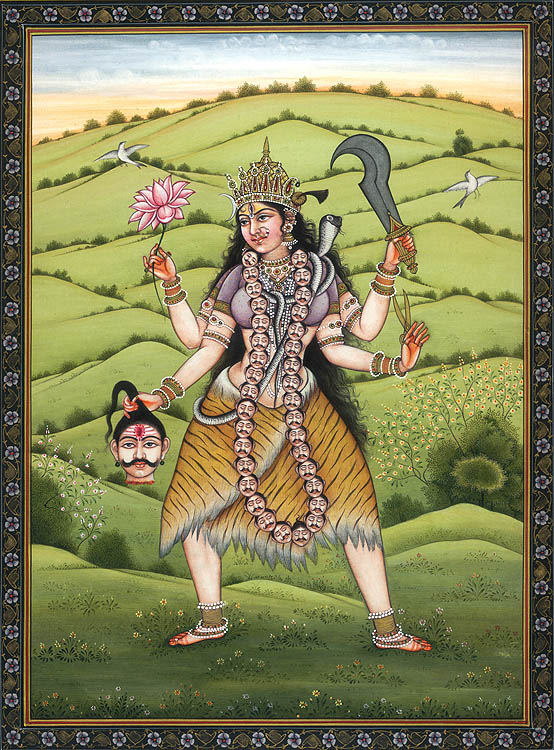 The Goddess Tara ("The Savior", in another version "Star") occupies an exceptional place in the iconography of the Mahavidyas, since she is always next on the list after Kali, embodying one of the most aggressive and destructive manifestations of the Divine Mother. The Sanskrit word "tara" comes from the root "tri", which means "to carry through", thus emphasizing the saving function of Tara, as the one that carries jiva across the ocean of suffering (samsara).

Unlike Tibetan Buddhism, where the worship of Tara in a peaceful form is especially widespread, Tara in India is better known as fury (ugra) manifestation of Devi. In Tibetan Buddhism there are analogues of the fury form of Tara, such as Kurukula, Ekajati. Bhagavati-Tara is the embodiment of the destructive aspects of nature and time, without which any transformation, including spiritual transformation, is impossible. With her divine grace, she dissolves the practitioner's ego, granting merging with the infinite Absolute. She personifies the transcendental form of the unmanifest Word (Para-vac).

Tara is depicted as an eternally young and beautiful girl of dark blue color with three red eyes. In the descriptions of the goddess, it is said that in her two left hands she holds a knife and a kapala, and in her right hands – a sword and a blue lotus. Around her neck, she wears a garland of human skulls, symbolizing the letters of the Sanskrit alphabet. Her matted hair forms jata of a sadhu. A tiger's skin replaces her skirt, and her forehead is crowned with ornaments made of white bone. Tara-Ma endows her followers with the power of fearlessness, the gift of poetic speech, the ability to control their desires, especially sexual energy. Destroying the accumulated karma of all previous lives, ultimately, it brings the incarnated jiva to moksha. Very often, Tara, like Kali, is depicted standing on a dead body among the raging fire of a funeral pyre – the body symbolizes Shiva, and shmashan is the illusory nature of manifested existence. Numerous epithets of the Goddess draw attention to the close connection with the world of asceticism and sannyas. On the other hand, it is customary for Devi to be worshiped with vama-marga rituals, with the help of which she should be worshiped in order to attain siddhis.

In the hymn of her thousand names, the creative, constructive aspect of Tara is indicated as the embodiment of motherhood. There is even a legend associated with the myth of the churning of the world's oceans. It is known that for the sake of saving the entire universe, Shiva drinks the deadly poison kalakuta, losing consciousness at the same time, but the goddess appears in the form of the Divine Mother, puts Shiva on her knees, and breastfeeds him, thereby reviving Mahadeva. Thus, the legend expressively emphasizes the maternal principle of Tara, always ready to come to the aid of those who need her.