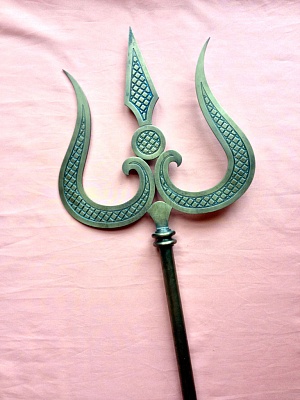 It is a trident, a Lord Shiva’s weapon which is carried by yogis. It is the royal scepter of Shaiva-dharma. The trishula symbolism is polyvalent and rich. The three spearheads have various meanings and significance. They are commonly said to represent various trinities - creation, maintenance and destruction; past, present and future, the three gunas – sattva, rajas and tamas. Also they symbolize the three shaktis – ichha, kriya and jnana (will, action and wisdom) through which Shiva controls the laws of dharma. In the human body, the trishula represents the three main nadis, or energy channels (ida, pingala and sushumna). When looked upon as a weapon of Shiva, the trishula is said to destroy the three worlds: the physical world, the world of the forefathers (representing culture drawn from the past) and the world of the mind (representing the processes of sensing and acting). The three worlds are supposed to be destroyed by Shiva into a single non-dual plane of existence that is bliss alone. The Goddess Durga also holds the trishula among other weapons and attributes in her hands and amongst her accoutrement, having received celestial weapons from both Shiva and Vishnu. It is also considered that the trishula relates to the worship of the Sun. In the sadhana the trishula can be used as the item of puja or as the attribute of deity, then the trident sets on the altar and the special mantra is reading for it.

Adesh to the Holy Name! Adesh to my Guru! Om Guru! OM to the Earth (Prithvi) and SOM to the Space (Akasha), to the Great Earth (the essence of the all earths), to the Great Space (the essence of the all spaces)! Trishula gives siddhis and dissolves existence. Om, the first spike symbolizes the unaccented sound of anahata, the second spike symbolizes the immortality, the third one is a symbol of uncomprehended and unexpressed, boundless state. The trishula grants siddhas to a sadhak. The iron of trishula is bliss for a yogin. The holy asana and the holy trishula heard what Matsyendra said and what Goraksha heard, the holder of trishula, who is piercing the time by a needle. The trushula that is eliminated inferior spirits and ghosts. Such is the true trushula-mantra. Adesh, adesh to Great Nath, to Guruji !

The mantra from the book of Yogi Vilasnath "Shri Natha Rahasya"