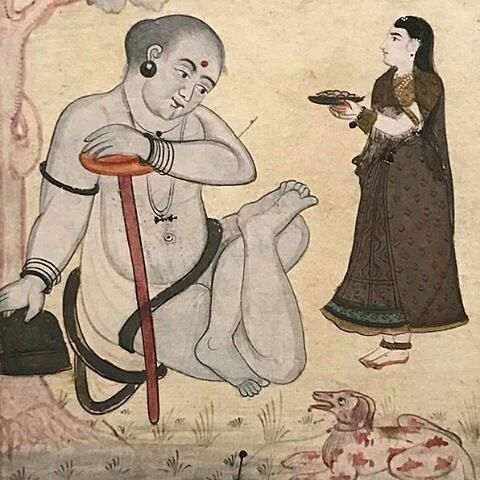 "discoloration",
from vi (a particle with the meaning of division) + rāga – "paint", "passion".

Detachment, emotionlessness, lack of desire to objects of pleasure. Vairagya is achieved by practicing tyaga, awakening to spiritual truths and discovering the Self as Atman.

Vairagya belongs to the same semantic row as such ascetic terms as sannyasa, tyaga, parityaga. It differs from them in a way that means not physical abstinence or a withdrawal from the world, but when a person's inner state of mind, comprehending the frailty of existence, totally detaches from feelings and objects of this reality (it becomes “emotionally colorless”). A person that has achieved the state of vairagya (vairangika, vairagi) perceives happiness and unhappiness with the same detachment, allowing the peace and tranquility in his mind not to be disturbed by any inner or outer events.

The concept of vairagya was born in the period of the late Upanishads (second half of 1000 b.c). At a time the ideal of perception of a living reality, which is not connected with this world, came to replace the Vedic ideal of well-being in the terrestrial life or afterlife. The idea of vairagya gets its further development from "Bhagavad-Gita". Here vairagya is seen as a method of self-control, a way to restrain the anxious mind which is necessary for liberation (VI 35; XIII 8). But unlike Vedic texts where vairagya is viewed as a step to the exit of this world, in "Bhagavad-Gita", on the contrary, it is the ideal existence in this world. From the mouth of Krishna there offered a concept of “uninvolved action”. According to this concept, an individual can continue leading a normal life, remaining at the same time unaffected by it and distanced from all anxieties. Thus, keeping the state of vairagya in normal life and carrying out his social and religious duties, an individual becomes untouched by the Law of Rebirth (sansara) and attains the ultimate liberation (moksha).

According to Shankara, an individual will obtain the state of vairagya by 1 of 2 reasons (Shata-sutras, 14.1): on the basis of life experience, gone through miseries and beheld the frailty of life or as a result of the insight, given to him as divine knowledge. The follower of Shankara Vidyaranya considered vairagya as a transitory step on the way to sannyasa – the asceticism.

Vayrag-panth and the spreading of vairagya practices in Nathas tradition

Vayrag-panth was named after its founder – Bhartriharinath, who left his kingdom and became a Yogi and the disciple of Gorakshanath. The tradition to have parikram (pilgrimage) to all siddha-pithas before the initiation to sannyasa came from Bhartrihari. This allows a Yogi to leave all the attachments of the world – tyaga and vairagya, without which, according to Nathas, yoga is not complete. There is a one story. Watching Jalanharnath fail the challenges of the Goddess during tantric sadhana, Bhartrihari told Gorakshanath that those who practice sadhana often do it out of vanity and pride of their theoretical knowledge in spirituality. They strive to satisfy their subtle ego under the guise of yoga and therefore until they prove their detachment, they cannot be considered avadhutas or detached yogis. He asked Gorakshanath to separate tantra-yogis who had not been firm in vairagya and asked for his blessing for spreading practices of vairagya among all nathas. Those who achieved vairagya began to wear earrings in the middle of their external ears. That is why the panth, founded by Bhartrihari, was called vairag-panth. After listening to Bhartrihari, Gorakshanath (Shiva Yogeshvara himself) gave his blessing to him to wear similar kundals to his own. Bhartrihari was the first Guru who became darshani. The level of Bhartrihari’s detachment was obvious as he left all his wealth. In Bengali there is a legend about how the first four nathas appeared from the body of Adinath: all of them failed to go through the challenges of Maya except Gorakshanth, all yogis and tantrics came to the fall, except Gorakshanath. That is why vairagya was the main thing that started to differentiate a yogi from not yogi. Detachment was the principle quality of God.

In Sampradaya the tradition of cutting ears became a kind of exam of the ability to detach from one's body. First dikshita goes through preparation; he talks to nathas, adopting their wisdom and practical experience. He has to prove his commitment to the tradition and to the path of yoga. When a guru sees that his disciple is ready, he gives him “darshani-diksha” which is also known as purna-sanyasa. This diksha is given to those who have been firm in detachment. The attributes have their own meaning that must be followed. Cutting ears does not by itself mean anything. There has to be essential detachment and yoga-realization. This detachment is not necessary for others, but for the yogi himself. Two kundals is the symbol of unity of ichha-shakti and kriya-shakti (the sun and the moon). Darshani-diksha is also a symbol of yogis who asserted themselves in vairagya, as nathas do not recognize tantra if it denies vairagya. The yogi will then see himself as Shiva. In tradition this is a sign of a free adapt who can follow svechhachara (his own will that is united with the will of God).