Vishuddha is a chakra located in the throat area. It is also called Kantha-chakra. 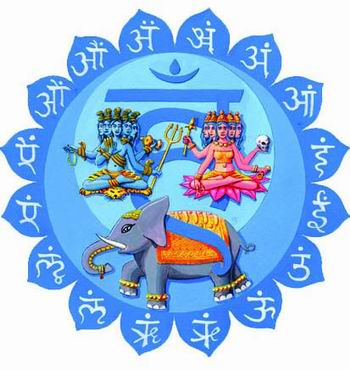 In the center of the lotus is a drop of nectar, in which the bija-mantra haṁ is reflected. It is believed that the divine nectar flows to the Vishuddha-chakra from Bindu. This symbolic nectar implies the truth, Satchiananda, is formed in Sahasrara, and gathered in Talu. An elephant is often depicted in this chakra, as a symbol of akasha element and wisdom. In "Hatha-yoga pradipika" it is said that by revealing vishuddha-chakra, the yogi attains ghata-avasthi (the union of the empty space of the jug with the outer space). Prana and apana are united, currents of ida and pingala. An unaffected state (anahata) is achieved. This state arises in the absence of duality. Most likely, this is why many tantras mane this chakra vishuddha (untainted).

Vishuddha is also responsible for the truth, is the chakra of purity and communication, the manifestations of creativity and oratory art depend on its functioning.