Kali Jayanti (the day of appearance of Kali Ma Goddess) will be celebrated in Warburton Interfaith Ashram. Yogi Matsyendranath Maharaj will perform Kali puja (a Hindu ritual of veneration) to honor and worship Goddess Kali. 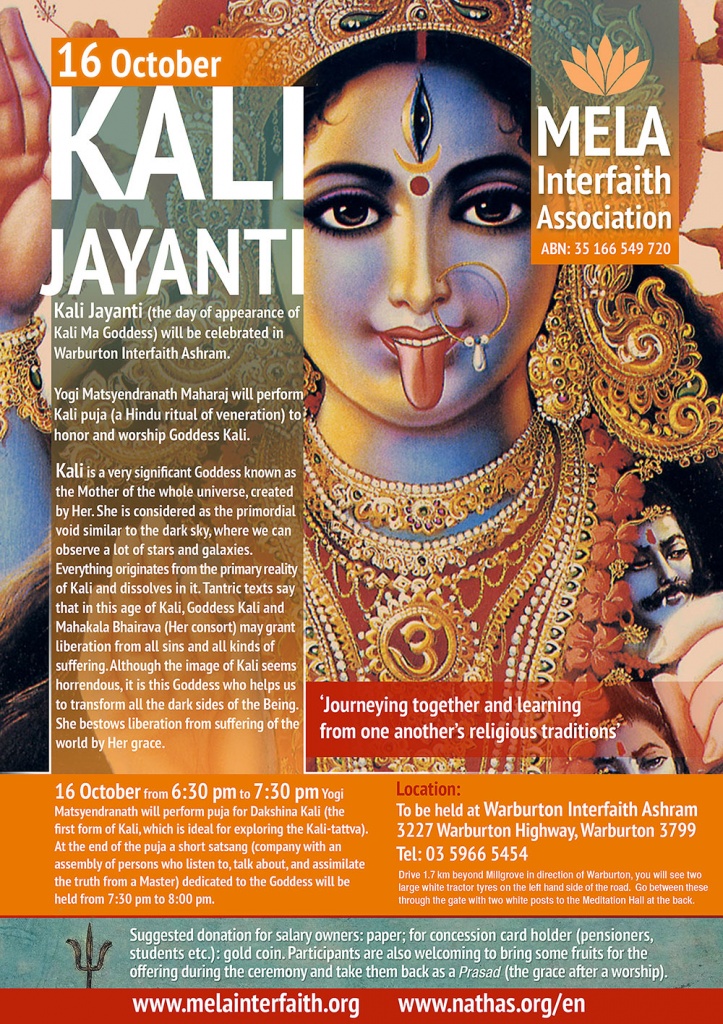 Kali is a very significant Goddess known as the Mother of the whole universe, created by Her. She is considered as the primordial void similar to the dark sky, where we can observe a lot of stars and galaxies. Everything originates from the primary reality of Kali and dissolves in it. Tantric texts say that in this age of Kali, Goddess Kali and Mahakala Bhairava (Her consort) may grant liberation from all sins and all kinds of suffering. Although the image of Kali seems horrendous, it is this Goddess who helps us to transform all the dark sides of the Being. She bestows liberation from suffering of the world by Her grace.

16 October from 6:30 pm to 7:30 pm Yogi Matsyendranath will perform puja for Dakshina Kali (the first form of Kali, which is ideal for exploring the Kali-tattva). At the end of the puja a short satsang (company with an assembly of persons who listen to, talk about, and assimilate the truth from a Master) dedicated to the Goddess will be held from 7:30 pm to 8:00 pm.

Participants also welcoming to bring a small amount of fruit for the offering during the ceremony and take them back as a Prasad (the grace after a worship).