The relation between kanda, Kundalini and chakras 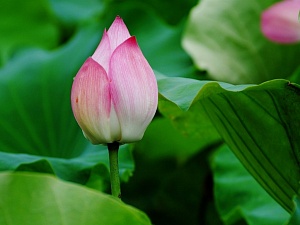 Many translate the term कन्द (kanda) as "bulb", "rhizome", "tuber", "root", etc. But where does it come from? And what does it have to do with Kundalini and chakras?

I would translate the term as "bud" which contains a flower in its latent form. Kanda is the source of the potential unfolding, blooming of the flower, and some flowers may even have several rows of petals. The petals that have initially opened are directed upwards and sideways, followed by others, on top of them and from within. There are flowers that bloom on ''several levels'' vertically, but this is a single system. Flowers usually need a balance of sunlight and moisture for their growth. We know that in Tantrism the flower is a symbol of Shakti, and also chakras are often called flowers, lotuses. Chakras are manifestations of Kula-kundalini, kula means "family", something interconnected, each petal; each chakra is some of the levels and sublevels associated with the awakening (blooming) of Kundalini energy. A flower (as you know from biology) is nothing but the sexual organ of a plant, so many yoga texts say that while a person has sexual energy, he lives, and when it withers or dies, the person dies. Light or heat and moisture which are necessary for flowering is what the sun and moon symbolize in yoga. If there is too much moisture and not enough light, the plant will not grow and will not flower, if there is too much heat and dryness, the plant will die. Therefore, a balance is needed.

When you start considering flowering with a deeper attention, you might get even more questions and insights. The question is: why is the person being born and why is he growing, is he growing towards death and just like in flowering, isn’t the continuous destruction process already embedded into the growth? And yes, this is exactly the same. Young man want to grow and when he becomes adult he starts thinking about the youth, he returns in his thoughts to the times when he was full of energy, and this serves as one of the reasons of new birth. When the flower of Shakti is reaching upwards to Shiva, on its peak it approaches ajna-chakra and as it is the peak of flowering, from its center (from the flower of Shakti) appears bindu, the seed of the flower. It is the source of a new birth for this species. That is, the ajna-chakra, which can be translated as "command", "order", is the "reboot" sphere of the system. It contains the transmission system of the developmental pattern of the microcosmic process; it is the sphere where the dissolution and new birth of the basic foundations of existence takes place. Shakti joins, merges with Shiva and receives his command to reveal herself anew in the form of creation. Ajna-chakra is a system of transmission (sampradana), and I think that the concept of sampradaya, what is often translated as 'tradition', also includes the transmission of darshanas, worldview guidelines, aspirations towards that which continues to carry the will of God and Guru. But, of course, it is not simply the transmission of some mundane and ephemeral aspirations, but rather passing over or transfer of supra-temporal experience. In fact, all practices are directly related to given experience beyond time [and space] or may be perceived as those leading to the  experience of eternity, and in fact this experience is what all practices are oriented towards.

Blossoming is also associated with fruits (siddhis), although the fruits of awakening, of unfolding consciousness, deepening, and refining it are indicators of success in sadhana. The very essence of yoga is more about entering into an unconditioned, primordial reality. In general, when we speak about "blossoming" and siddhas (success), in Russian we can find many derivative words, e.g. "prosperity", "wisdom" (deep knowledge), which is the opposite of ignorance (i.e. inferior knowledge), which is also a kind of maturity. I think this image gives a good idea of what is meant by the word "awakening", "self-realization".

Therefore, the flowers (chakras with Kundalini) manifest bindu, it falls from above to the ground, giving birth to new fruit and sprouting. In the human body, kanda is the place associated with the reproductive function. Although, of course, the awakening of Kundalini is not simply an energy of physical growth, but rather its sublimated form in the form of spiritual growth, which leads not to the death of the body, but to death in relation to everything that is illusory, transient. It is simply that one thing can be involved in acquiring the other; the mundane must become an instrument for the realization of the spiritual.