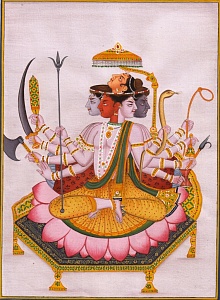 The theory and practice related to amnayas are based on the legend that God Sadashiva from his five faces manifested five levels of knowledge – Amnayas, which he passed on to Shakti. The whole story is quite symbolic, because knowledge was transmitted through speech (i.e. the sound “nada”), and, in fact, Sadashiva himself is a symbol of “nada”, which is personified in the form of “maithuna” or “yamala” – an intimate connection between Shiva and Shakti. "Nada" makes Shiva and Shakti tattvas related to each other through the Sadashiva tattva.

Sadashiva also personifies the free will of Shiva (ichchha-shakti), aimed at this union, through which the entire Universe manifests itself, it is nothing more than the unfolded Shakti and the all-pervading consciousness of Shiva. The whole manifestation is usually represented in the five forms of Sadashiva and his five Shaktis, since Shakti is always facing (mukha) towards Shiva, she helps him to manifest his will. This theory is known both among the Nathas and in other Shaiva-Shakta lineages. Among the Nathas, this Shakti is called Nija-Shakti (which means "one's own"), i.e. it is entirely in accordance with the will of Shiva. Shiva manifests through Shakti in five main faces, Shakti also, but then they spread into many other forms of Bhairavas ​​and Matrikas (yogini).

The process of transferring knowledge from Shiva to Shakti is sacred. Just as you do not tell anyone about your intimate relationships, so, according to many rules of tantrism, tantric knowledge and full practices should be kept secret. This knowledge is presented in five types of texts called Tantras or Agamas.

From the five faces or mouths came these five categories of tantric knowledge, which in tantrism are usually correlated with different cardinal points. Usually, there are four, five, six, and sometimes seven. These are the four cardinal directions: west, north, south, and east, as well as the fifth direction at the top - the face of Shiva. Sometimes the face is also mentioned, which is above the fifth or the one below. But of the main ones, the Agamas most often list five faces, these are Sadyojata, Vamadeva, Aghora, Tatpurusha, and Sadashiva.

“Amnaya” or “shrota” in translation from Sanskrit can have several meanings – these are “flow”, “direction”, “tradition”, etc. In general, this is a kind of conglomerate of knowledge set forth in different texts, divided into different categories. One who knew these tantras and followed them was considered a Tantrik.

The texts describe various energies, levels of consciousness or five vayus, five mahabhutas, etc., which correspond to these amnayas, and in many esoteric traditions of the world, the number five has different fundamental meanings not by chance.

In some Tantras, of all amnayas, three main ones are listed: dakshina, vama, and siddha, which can also be correlated with tantric acharas. It is believed that these three directions, corresponding to three upayas, include all the others in a compressed form. In addition, this triple category corresponds to various sacred triads. These are, first of all, the three coils of Kundalini Shakti, which has a connection with Pashchimamnaya (Western tradition), personified by the Kubjika Tantras. All the rest came from Pashchimamnaya, this tradition is one of the most ancient. In fact, it is the basis of what many now call sadhanas "Kundalini Jagaran" or, as it is commonly called in the West, "Kundalini Yoga". According to the Kubjika-mata Tantra, the Goddess Kubjika traveled to all the sacred places of India (shakti-peetha), where, in one aspect or another, she connected with a certain Bhairava.

In the human body, these shakti pithas are also present in various parts of the body, they are designated as matrikas (Sanskrit letters). Sometimes this Shakti can take on the forms of male deities, sometimes female, therefore this Shakti is pure consciousness that permeates (vedha) all forms and dwells within everything. She is the cause of all forms, and their basis, she is all these forms in their particular and general aspect. The rest of the Traditions which correspond to the cardinal points, such as Krama, Kameshvari (Shrividya), Trika, also correspond to this triple principle.

Krama is divided into three categories of forces of consciousness, Shrividya is the cult of the Goddess Tripurasundari, Trika is a system of three upayas and manifestations of Shiva: anava, shakta, and shambhava. In many ways, these Traditions are related and are one kula (family). Practices of one can complement the others. All of them are united by one important feature - they are aimed at worshiping Shakti and awakening Kundalini Shakti in a variety of ways.

Of these Traditions, Shrividya has been fairly well preserved, while the traditions of Trika and Krama were interrupted during the advent of Muslims in India. Many Gurus of these traditions immigrated from Kashmir.

Almost the same happened with the Kubjika tradition, but it spread in Nepal and, at first, in India somewhere from the 11th century. Over time, in India, it completely disappeared, retaining, however, its influence on many tantric and yogic cults, including the Natha Tradition. In Nepal, this cult was developed among the Tantric brahmins under the kings of the Malla dynasty. This Tradition has remained to this day, the Rajopadhyaya brahmins give initiations into it, as well as the kshatriyas (Karmacharyas), only to members of their families. In general, it is very difficult for people from another culture to receive an initiation to the Kubjika tradition, in contrast to the Natha and Shrividya traditions.

Be that as it may, all tantic lines, such as Trika, Krama, etc., are complementary, and kaulism, in general, tends to consider all such teachings as one category of knowledge and practices. You can find some elements in Shrividya, some in Kashmir Shaivism.

As for the Natha teachings, to a greater extent, it is the essence of all at once. Some Tantrikas tend to think that the Nathas came out of all of the above, so they associate the Nathas with themselves, calling themselves "Nathas". But this is a gross distortion of the real state of things. Undoubtedly, at some level, everything is one, but when we talk about Traditions and doctrine, practices in their entirety, then, of course, it is necessary to distinguish their fundamental differences.

Does Natha-sampradaya have fundamental differences from the tantric amnayas?

These traditions most likely developed in parallel. There are many Vedic elements in the Natha karma-kanda, many of which are not quite similar to the well-known tantric sadhanas. Considering that there are many gross and superficial concepts regarding yoga and tantrism, these two systems of spiritual practice have been separated by people who do not have sufficient experience in the latter. According to the Kaulas Tradition, a certain Kaula Guru appeared in each yuga, according to the Nathas, Gorakshanath appeared in different places in each yuga to carry the teachings of yoga. Depending on the time, he could simply teach different yoga, and some systems, due to their irrelevance at a given time, could simply be lost. This situation can be observed everywhere, in Tantrism as well. For example, some well-known tantric texts were lost. Yoga is a doctrine based on natural laws, so it is quite obvious that it has always existed in one form or another.

What are the connections between amnayas and chakras?

Amnayas emerged from Sadashiva's mouths as world-creating energies corresponding to Sadashiva's faces. It is believed that not only the main tattvas of the Universe came out of these mouths, but also the tantras, agamas, since the tantras are nothing more than the conversations of Shiva and Shakti when their faces are mutually directed at each other. If you are a jnani, then spiritual practice consists in comprehending these texts that belong to one or another face and the corresponding amnaya for you, and if you are a yogi, then the corresponding foundations of being, expressed in chakras and everything connected with them. Since there are different amounts of amnayas, so are the chakras.