Kanda and its location 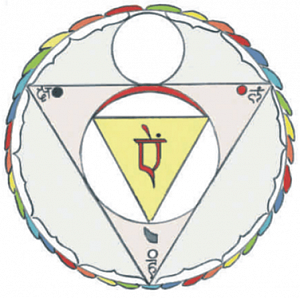 Many Yogic texts mention a certain area called kanda, which means "bulb" or "root", from where all body’s nadis take a flow. But since the texts sometimes contain different information about the location of kanda, confusion may arise. The reason for the misunderstanding may be that the concept of kanda is associated with tantric symbols which is not explained in the texts in details.

Let's go through some classical sources and see what they tell about kanda:

Siddha-siddhanta paddhati:
2.1. There are nine chakras in pinda. At the base is brahma-chakra. It has three turns and form of a circle of yoni. There is mula-kanda in brahma-chakra. One should meditate there on Shakti in the form of fire. There is also located Kamarupa-pitha, that fulfills all desires.
2.2. The second is svadhishthana-chakra. In its center one should meditate on lingam that is facing west and that is alike a branch of a coral. There is also located Uddiyana-pitha that attracts [the whole] world.

Viveka-martanda:
19. Adhara is the first chakra, svadhishthana – second one. In the area of yoni, between those chakras, is Kamarupa.
26. In sushumna that is like a string of lightning, in the navel area is located kanda. This chakra is called manipuraka.
28. Above the genitals and under the navel is located kanda-yoni that is like a bird's egg. From here 72,000 nadis begins.

Hatha-yoga pradipika:
3.113. Kanda, located above the anus, has a height of a palm (12 fingers or 9 inches) and is four fingers wide; it is soft and white, as if wrapped in a piece of cloth.

Goraksha-yoga:
25. All 72,000 nadis begin from kanda, or yoni, which is just above the penis and below the navel, as if from a bird's egg.

It may seem that the texts speak about different locations of kanda (in the muladhara, in the manipura, between the penis and the navel). But if you turn to Tantra, you can see that the texts describe one structure, just from different perspectives.

In Tantra, kanda is linked to triangle of Kamakala, from which the entire creation is manifested (hence the fact that kanda is the source of all nadis of the body, micro-cosmos). Kamakala triangle is directed downwards (symbol of Shakti), the lower corner is connected with fire and sushumna, the upper left corner is associated with moon and ida, and the upper right - with the sun and pingala.

It is mentioned that Kamarupa (Kamakhya-pitha) is located in muladhara and Shakti in the form of fire redirects directly to the lower (fiery) corner of Kamakala.

The rest of kanda is above svadhishthana, reaching manipura.

Therefor according to the texts, kanda is symbolically represented as a triangle, extends from muladhara to manipura, this corresponds exactly to the length of 12 fingers indicated in Hatha-yoga pradipika.

It is also said that Kundalini sleeps in kanda, folded in three and a half turns. These three coils of Kundalini are connected with the three corners of the triangle. And in the texts folded Kundalini can also be mentioned in muladhara, in manipura and in svadhishthana.