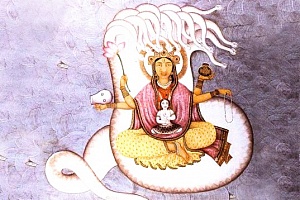 09.12.2016 Various Sampradayas could define many images of Vedas, Puranas, Tantras, Yoga-Shastras in their own, sometimes diametrically opposing ways. They use metaphorical language which is intentionally called 'sandha-bhasa’ by siddha yogis. This is a language which allows you to find doors to multidimensionality and versatility of meanings. One of such often described terms in Tantras is विष “viṣa” (poison), which is related to a poison consumed by Shiva after Samudra manthan (churning of the ocean by Devas and Danavas). Shiva also wears snakes instead of brahmanical thread and as earrings in his ears and etc. However, you may notice that the same element, for example, the churned ocean could produce opposite elements such as amṛta (nectar of immortality) and poison. Goddess Kundalini in her snake form could be associated with poison, but she is the Goddess of nectar, Sudha as well.
Kundalini is described in 'Tantraloka' (29.248) as following:


Then, in such a way penetration of a snake is explained as closely connected to penetration related to Shakti. He says:

The same Supreme Shakti, she manifests bliss and goes from a place connected with ‘Birth’ to a highest level, she, who is adorned with five snake hoods. ||248||


Then Shakti ascends, appears as five vyomas in five places in the body and goes to dvadashanta, said in this part from 248 stanza and further.
You can notice a description of snake as Sankarshana (destroyer of time) and there are Universe’s worlds lie on snake’s hoods. Also, if you check behaviour of common snakes while attacking, you will notice how they coil before strike, so probably a coiled snake in kanda, described as ‘sleeping’, is a symbol of poison and destruction. When snake, listening the Nada sound, straightens and stretches upwards, as for example, when snakes are charmed by fakirs, it is another symbol which is often found in yoga scriptures. Yet again, concerning a poison, a term विष (n.m) - is poison, but as a feminine and neuter noun it is translated as ‘evil’. Probably, by poison, ‘the poison of samsara’ i.e. various Worldly Defilements are allegorically implied. Though Kshemaraja gave another context to poison related to kaula interpretations, he said that this term is correlated with विष् (penetrate), i.e. character of Shakti. Shakti can spread in the form of visarga and bindu, and poison possesses similar qualities. ‘Even a poison transforms into the nectar during tantric sadhana' said in 'Shiva Stotravali' (20.12). I.e. the context is that worldly defilements form the nectar in connection with the fire of consciousness. This definition of ‘poison’ can be found in almost all known tantric systems: Shri Kula, Kali Kula, Kubjika, Trika etc., also in the Natha Yoga. According to Kshemaraja, ‘viṣa’ is nothing more than ‘avesha’, i.e. absorption of consciousness by expression of Shakti. Look how this technique is described in 'Vijñana Bhairava Tantra’:

It is necessary to put your consciousness, being similar to the purest space, into the very centre of engagement between fire (consciousness) and a poison (various defilements) or to be absorbed into fullness of vital force through sexual intercourse.


In general, it is possible to explain many ‘impure elements’ in vamachara tantra, such as various intoxicants: alcohol, bhang (vijaya) and drugs, as smokable, as well as liquefied (which is made from the same seeds as bhang) through the concept of ‘poison’ as enhancing element for awakening of blossoming consciousness. Also, sex, which is criticised by Orthodox Hinduism, especially with a deliberate disregard to the system of varnas, castes, households and, in general, to sexual emanations, meat consumption etc. Whatever the case I use substitutions for the most of these elements, because I realised many states of consciousness and there is no necessity for a variety of radicalisms. These substitutes are called ‘anukalpas’. In yoga these states and effects are often connected with particular psychophysical inner processes. The conclusion is that ‘the poison of samsara’ could be doubly viewed as destructive element, as well as realising true pureness.