The concept of sacred and living in India 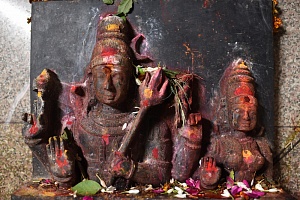 In classical yoga texts, it is written that: "There are as many forms of living beings as there are yoga asana”. How does this relate to asanas such as the plow pose, the rock pose, etc.? It's not like they are live beings.

In India, by the term Shakti or “Mother Goddess”, Hindus can mean many things, and some specifically associate everything with Her. All that is manifested is Shakti, Shakti is the body of Shiva, and Shiva is the soul of Shakti. Shiva is manifested in many forms through Shakti, but Shiva is also manifested as “jiva”, the individual soul. Therefore, all of these divisions are relative, tantra attributes specific methods to all manifestations of Shakti; as they are Shakti herself, and through Shakti we reach the realization of Shiva, this means that all manifestations are methods, and not only methods, but the goal as well. Because Shiva without His manifestation is not Shiva in all His fullness and greatness, accordingly, the path of tantra and the path of Natha yoga is the worship or realization of Shiva in all His fullness. There is no division between spiritual and non-spiritual. Of course one has to go through certain levels of spiritual realization first to reach this understanding, but still, you have to know the goal from the beginning.

India possesses a very rich, developed religion and philosophy, therefore one can find different ideas of what the ultimate spirituality is, and what can be considered the highest spiritual perfection in general. In India one can worship an abstraction that has no qualities, or can worship a live Guru, even "oneself". Many things are sacred in this country: mountains, trees, temples, holy places, rivers, sacred attributes of the Gods; there are many people of different professions, and for them the instruments they use in their work, to which they perform puja separately, are sacred. For example, I gave my students mantras to recite for the place where sadhana is done, but in India, in fact, tantriks may approach the process more scrupulously, up to the point where they would do puja to the place. They worship the door of the house, and that is why they have an image of Ganesha hanging there. All of this is alive in their understanding.

For example, why do many rituals in India seem absurd to a westerner, such as washing the feet of the Guru and then drinking that water? Of course, we do not practice that here, everything is much simpler, but you have to understand the meaning of such ritual. It is believed that for each person something particular is more sacred: if it is a dhuni, the person sprinkles himself with ashes. It's sacred in the sense that Shakti, power, emanates from that object. Therefore, a Hindu, for example, touches the threshold of a temple or a murti with his hand, and then touches his head or heart; so the hand serves as a guide for that Shakti, which activates your ajna chakra or anahata.

In India different groups of sadhus worship different objects, so for example, Hindu would never eat cow meat or human meat, but for an aghori this is not a problem, but an aghori would find it sinful to eat a ghora, i.e. a horse. A cow gives milk etc. to human beings, so a Hindu receives benefits from it, so in his mind he should be grateful to whoever or whatever provides him with those benefits. To them, a cow is a mother and therefore cannot be killed. But sometimes it gets to the point of absurdity, like when a cow crosses the road and causes a huge traffic jam. There are many things that on the surface appear to be absurd. But a Hindu believes that massaging the Guru's feet is a good thing for the disciple, that he is receiving Shakti from the Guru, but for someone else it would be a very humiliating thing to do. It is also considered a mercy to clean the Guru's house, because any contact with any objects in that place would be a kind of transfer of shaktipat, this is the way the classical Hindu thinks. And, of course, there is a certain truth and meaning in this. So, Hindus worship sickles, plows, looms, fishing nets, because they use these tools and they really benefit from them. It's just that not everybody is aware of these nuances, because not everybody has come into contact with Indian everyday life. For example, I have already said that the concept of "caste" is not really as unambiguous as people in the West imagine it to be. It also includes a profession, such as fisherman, carpenter, etc. Often this occupation is passed down through generations: the grandfather was a fisherman, the father, then the son, etc., and they too have their own rituals for honoring fishing nets.

Regarding asanas. Both tantra and yoga are characterized by the idea of macrocosm and microcosm, Pinda-Brahmanda vada. In the context of Hatha Yoga, the whole universe is within you, and you are within the whole universe. The yogi, through the practice of yoga, develops prakaya-pravesha, that is, the ability to spiritually penetrate other bodies and objects. This ability is the basis for being able to integrate on the psychophysical level with another psychophysical entity without losing your holistic awareness of yourself and the world. Thus, you realize yourself as the omnipresent Shiva. Some tantric traditions argue that this should only happen at the level of consciousness. Nathas, on the other hand, admit that this is true, however not only on the level of consciousness, but on all levels. In this regard, asana is one of the means of getting into character at the level of consciousness and energy. A yogi uncovers different states of prana in different objects, discovers in himself certain powers that exist in the deep layers of the subconscious, unconscious or collective unconscious. For him all living things are energy. Of course, this understanding of asanas may seem very complicated at the beginning, but I'm not suggesting to practice asanas in this way from the very beginning. I think that it is quite easy to understand where mountain, tree, boat, plow asanas come from, and why they are connected specifically with the forms of "living forms" through these examples. In general, understanding the practices of Nathas is greatly helped by Tantric-Shakti concepts. Nathas also have their own concept, but as it happens, among Tantrics there were more scholars and pandits, capable of giving explanations in understandable scientific language. Whereas with the Nathas it is supposed that understanding is gained through experience and the grace of Guru. Among the yogis not many were jnani, so almost no one sought to spread the tradition in the usual way, in the form of publishing adequate literature and some kind of educational programs. If you come to a Nath, he'll tell you: "Sit by the dhuni and listen to yourself", or even won’t tell that. If there are any books on yoga, they are found only in places like Gorakhpur, because it's a political center, so they try to publish something more or less understandable for common people. But even with those publications, you can only catch a glimpse of something, and then it is up to you to make the effort to dig deeper on your own. And it's also important to communicate with experienced sadhus and Gurus, that's the most important thing for understanding yoga practices.