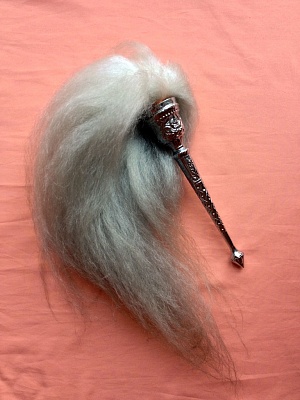 The fan made of Tibetan yak’s tail. It is used in pujas and aratis as a sign of respect. In the old days, when royal dynasties were governing, servants used the chamvar for making cool and to brush away insects around royal persons.

Adesh to Holy Name! Adesh to Guruji! Om Guruji! Greetings to him who is sitting on the asana that is made from snakes, to him who is surrounded by the truth, by religion, by milk and by eight families, to him who is sitting on a throne and Shri Vishnu holds the sunshade decorated with stars over his head. Observe the perfect Universe. Goraksha the ascetic is sitting on an eminence in his favorite temple. The offer of chamvar to Mahesha awakes the blameless light. In Trayambak on Anupanshila he watches crowded gathering of siddhas which hear his admonitions. Listen to the text and realize Guru Gorakshanath ji who stays in the Universe. Nathaji Guruji adesh!