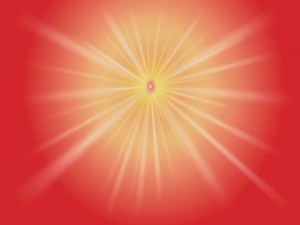 Self-generating seed of life, original unity of Shiva and Shakti, beyond human understanding. Whole being is manifested from white and red bindu (symbols of masculine and feminine origin), which were formed by its splitting. Bindu is depicted in the center of yantras. The universe is manifested from it and is dissolved in it.

Bindu is the omnipresent emptiness, the Shunya that integrates the structure of all forms as a manifestation of that emptiness. Bindu is a source of the creation of the universe. As mahabindu it is The Absolute, Shiva. As a dot, on the one hand, it does not have a form and is a symbol of the subtlest state possible. On the other hand, bindu is a form, the form of all forms, and foundation of all foundations. During the creation bindu starts splitting into the second bindu, which is called Shakti. At the same time the connection between Shiva and Shakti remains and is called «nada». The maximum tension from this connection creates three bindu. They create all worlds and the Universe – para-pinda that is the absolute emptiness and the form simultaneously.

The human body contains everything of the above, it also has bindu as a center of consciousness. This is a tantric view at the process of creation.