The Goddess of happiness, beauty, and wealth, the consort of Vishnu. She is usually depicted as a beautiful woman seated on a lotus and holding a lotus in her hands, representing the purity and beyondness of Truth. She is also called Maha Lakshmi, which literally means "great fortune”. Another of her names is Shri, which can be translated as "prosperity". She is one of the most popular deities of India and is associated with many practices aimed at obtaining wealth and worldly goods. 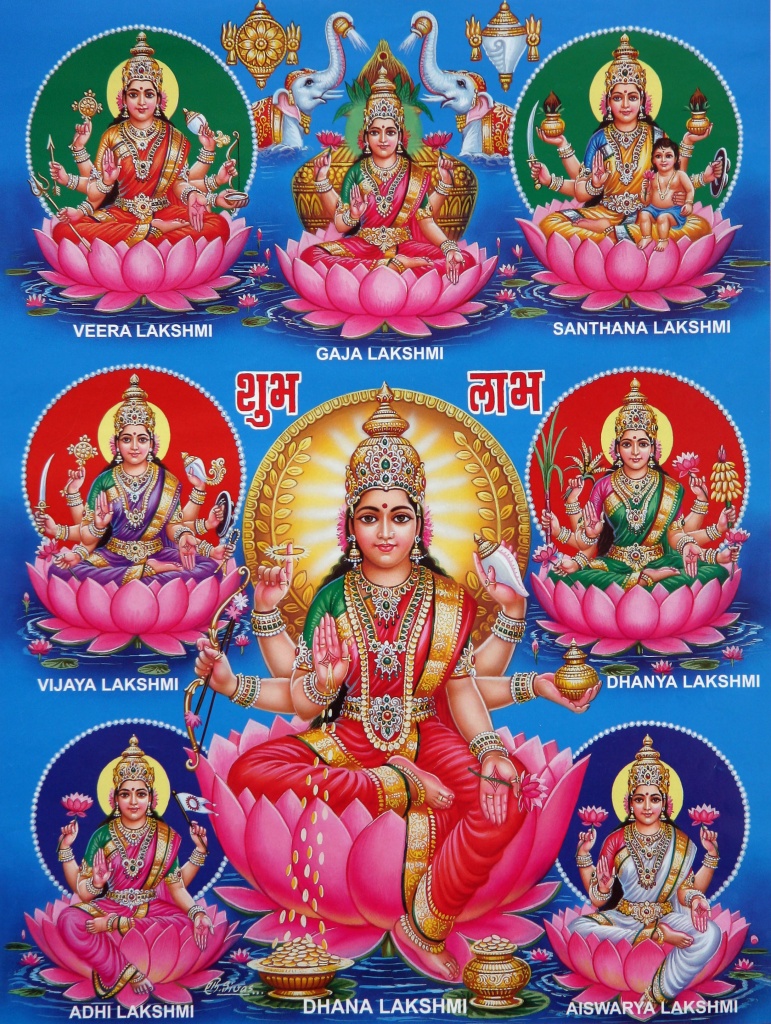 Lakshmi bestows happiness and prosperity to her devotees, not only material wealth, but also spiritual wealth such as wisdom, inner strength, and knowledge. In Vaishnavism she is regarded as the Mother of the Universe, and for many Hindus she is the image of the ideal wife.

One of India's famous festivals, Diwali, the festival of lights, is dedicated to Lakshmi. It is believed that during this time, Goddess Lakshmi visits people's homes in search of a place to rest and gives preference to the brightest house, which is why on this holiday it is customary to light many lamps, candles, and fireworks everywhere.

According to legends, Lakshmi appeared through separation from Vishnu. Another myth says that she appeared during the creation of the world, out of the primordial waters, sitting on a lotus flower. This is why she is sometimes called Kamala, meaning born of the lotus. One of the most popular versions also states that she appeared in a lotus flower during the plowing of the world's oceans by the gods and demons.

Lakshmi is believed to always accompany her consort Vishnu, following him in all his incarnations. For example, Rama's consort Sita is considered an incarnation of Lakshmi, as is Krishna's consort Rukmini.

Lakshmi is almost always depicted standing or sitting on a pink lotus, and holding lotuses in her four or two hands in various stages of maturity. The goddess loves these flowers more than anything else in the world, which is why lotuses and lotus seeds are often used when performing pujas and homas for her. The lotus is a common symbol of spiritual perfection in Eastern teachings, and its flowers at different stages of maturity are symbols of the soul at different stages of spiritual development.

The Eight Aspects of Lakshmi