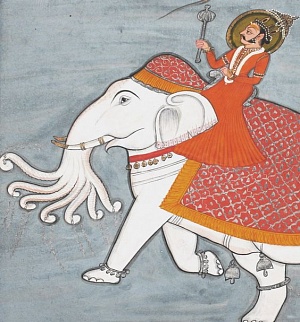 Indra, or Shakra (Sanskrit शक्र, Shakra meaning mighty, strong), is the king of the gods (devas) and the ruler of the heavenly abode, Svarga, one of the main deities of the Rigvedic pantheon.

In the Vedas Indra appears as a creative force, inspiring, giving light and order, and destroying darkness and chaos; by this force he rules the earth, the sky, the gods and all things. He has separated heaven and earth, which were previously in indivisible unity, and created the shape of the world with its atmosphere, sun, mountains, rivers, etc.

In the hymns of the Rigveda it is often mentioned that he is intoxicated with soma, the divine beverage that bestows creative inspiration and indestructible power.

High heaven unsupported in space he stablished:
He filled the two worlds and the air's mid-region.
Earth he upheld, and gave it wide expansion.
These things did Indra in the Soma's rapture. [2]

From front, as ’twere a house, he ruled and measured;
pierced with his bolt the fountains of the rivers,
And made them flow at ease by paths far-reaching,
These things did Indra in the Soma's rapture. [3]

Indra is a mighty warrior, the leader of the army of gods in battles with the asuras, and was considered the patron of the kshatriya varna. Indra is fearsome and possesses a crushing weapon (vajra) which combines the powers of a sword, mace and spear, but as the king of gods he is benevolent, generous to worshippers, granting peace and prosperity; to combat droughts he is asked for rainstorms. Indra was summoned during wars for his support through his divine weapons and auspicious interventions.

In the post-Vedic period Indra gave way to Trimurti. His role changes considerably: in particular, Indra's role as the supreme deity is pushed aside altogether, but his role as the leader of warriors strengthens. In addition, Indra as the deity associated with rain and fecundity, is brought very close to Parjanya up to the point of their identification. The image of Indra is used in the ritual of rain invocation.

Indra transforms from a worshiped God into a mythological figure involved in various, sometimes unflattering, adventures, while other deities such as Shiva and Vishnu replace him at the head of the Hindu pantheon. Indra becomes one of the guardians of the world, the lokapalas. Brahma grants him power over the east and Indra's elephant, Airavata, guards this land of light.

The meaning of the word "Indra"

There are various explanations of the word "Indra", given by Yaska in Nirukta (one of the six Vedangas), Shloka 10.8:

He is so called because he sees everything (idam + dṛś), according to Aupamanyava. The word may also be derived from the verb id, which means "to be mighty", i.e., being mighty, Indra tears enemies apart or makes them flee.

Indra is generally depicted as a four-armed deity, riding his vahana Airavata, a white elephant. There are also depictions of Indra sitting on a golden chariot pulled by two horses.

Indra can also be portrayed as a god with two arms and with 1000 eyes depicted on his body. Such a form of Indra is called Thousand Eyes.

There are different legends about Airavata's appearance: according to the myth of the plowing of the ocean, when the gods and asuras obtained various treasures, he emerged from the waters. According to another legend, Airavata and seven other elephants emerged from the shell of the world's egg and became the guardians of the eight sides of the world. Airavata, like Indra, guards the East.

"Om, may I comprehend the King of the Gods (the Thousand Eyed) by meditating [on Him,] who is holding vajra in his hand, may that Indra inspire [me]."

There are different versions of Indra's birth, but the most common version is that Indra was born of the union of Kashyapa and Aditi, and is one of the Adityas.

Indra's mother is believed to be Aditi (for example, this is mentioned in the "Padma Purana"), and in the "Atharvaveda" she is called Ekashtaka and is identified with Ratri ("night"). 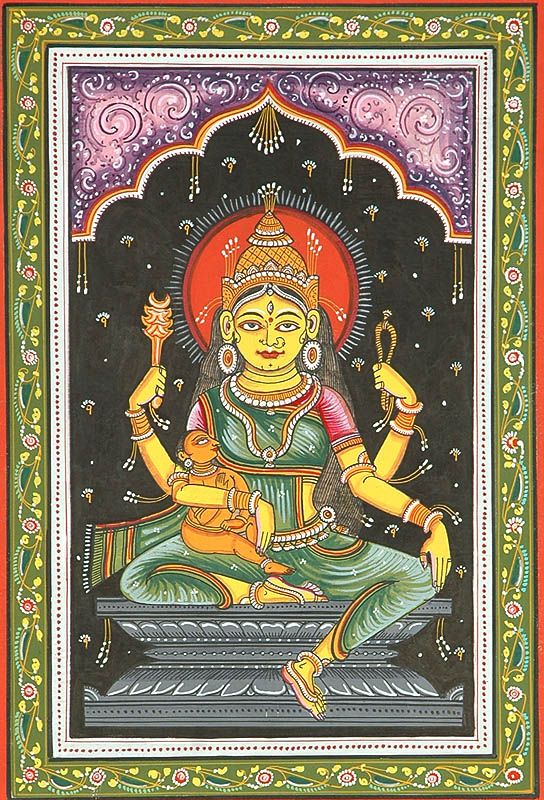 Indra is married to Shachi, her other names are Indrani or Pulomaya. Indra and Shachi have three children: a son Jayantha and two daughters named Jayanti and Devasena. Goddess Jayanti married Shukra (also known as Shukracharya, Guru of the Asuras). Goddess Devasena is married to Kartikeya, the god of war.

Indra's exploits are given significant attention in the Vedic texts, especially in the "Rigveda". In the epic "Mahabharata", Indra is the father of the hero Arjuna, and he manages to win the magical armor that will make his son invincible.

Victory over the asura Emush


Indra engages in battle with the treacherous asura Emush, who in the form of a boar stole from the gods grain intended for sacrifice, and hid it among the asuras treasures. The demon had already begun to make porridge from the stolen grain, when Indra drew his bow and killed Emush with a single shot. Thus the sacrificial food was taken from the asuras and returned to the gods.

Indra killed the mighty serpent Vritra, who had blocked the rivers with his ninety-nine fortresses. Vritra, consuming water, grew with extraordinary speed, pushing back the Western and Eastern Oceans. Every day the serpent devoured a huge amount of food, and intended to devour the entire universe, the gods and living beings.

Fearful of the serpent, the gods cried out to Indra, begging him to lead the heavenly armies to protect the earth. Brahma himself instructed the hero, urging him to fight the serpent. Indra led the heavenly armies into battle. With one crushing blow of the vajra forged by Tvashtar, he sliced the demon's head open. The waters, trapped in Vritra's womb, broke free and rushed to the ocean.

Indra also defeated Namuchi, a warrior who knew no defeat and who was the mightiest of the asuras. Namuchi and Indra made an alliance, taking an oath that neither would strike the other either on water or land and with weapons neither dry nor wet.

Namuchi was the master of the strong heady drink, sura. The gods did not drink sura, they had their own drink, soma. One day Namuchi, wishing to become the most powerful in the whole universe and deprive Indra of his power, mixed sura into the soma that Indra was drinking, and by doing so, deprived him of his power.

Indra came for advice and help to the Ashvins twin brothers (who were healers), sons of his brother Vivaswat.

What should I do? — Indra asked the brothers. — Namuchi has betrayed our friendship by weakening my strength. But I took an oath not to raise weapons against him, either dry or covered with moisture, neither on water nor on land.

Then the Ashvins covered Indra's vajra with sea foam. And so at twilight on the shore of the ocean, where waves were breaking, neither on water nor on land, Indra killed Namuchi with his vajra covered with sea-foam, a weapon neither dry nor wet. The Ashvins, on the other hand, used the blood of the slain Namuchi to prepare a healing drink that restored Indra's strength.

Return of the celestial cows

The Pani Asuras (a powerful race of asuras) stole the celestial cows and drove them to the edge of the Universe, hiding them in a mountain cave with the demon Vala. Darkness reigned in the world, for the cows were the seven rays of the dawn. Indra sent the divine dog Sarama to search for them. But the Pani bribed her with cow's milk, and she, returning to Indra, said that she had not found the missing cows.

The omniscient Indra, with the sage Angiras, nevertheless found the cows. The singing of Angiras made the walls of the cave collapse. Vala, the demon of the cave guarding the cows, howled intimidatingly, but was defeated by Indra's fiery vajra. So the celestial cows were set free, the darkness dispelled and the light of Ushas, goddess of dawn, shone in the sky, and the sun returned to the world.